Police are searching for two masked men on the run following an armed robbery at a Preston service station. 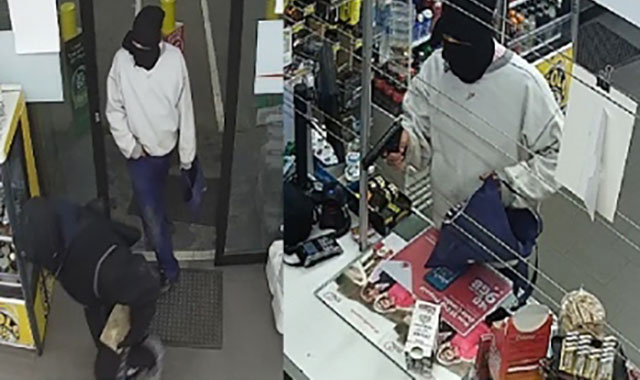 Police are investigating after two armed men produced a firearm and a brick in an assault on the BP petrol station on Bell street at 3.30am on Sunday morning.
The offenders assaulted the attendant in the process, escaping with cash and cigarettes.
Police from the Mill Park Serious Crime Task Force are investigating the incident, and have released CCTV footage in the hope of identifying the offenders.
The CCTV footage shows one of the wanted men pointing a firearm towards the attendant, as the other jumps over the counter and threatens him. Then filling a plastic bin with cigarette packets.
The attendant remained unharmed during the incident.
Senior Constable Alastair Parsons has provided a description of each of the offenders.
One was seen in the footage as wearing a black hooded top, black track pants with white detail down the side, and a black mask.
The other offender was wearing a white jumper, blue pants, black shoes, and had a black cloth covering his face.
Both men are believed to be Caucasian and of a medium build.
The incident follows another serious robbery that occurred in Thornbury, two weeks earlier.
Four teenagers were charged with armed robbery after wielding hammers and an axe to steal cigarettes and cash from Cignall Thornbury.
Police are asking for anyone with information to contact Crime Stoppers on 1800 333 000.