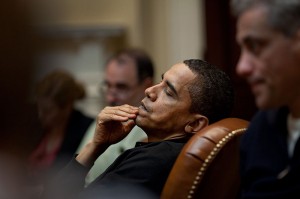 It’s time to grab a bag of Doritos, play Dr. Dre’s The Chronic and pack a bowl – Obama’s secret weapon in 2012 could just be marijuana.

Not the actual product so much, rather the legalisation of it.

Recent figures in the US indicate that 50 per cent of those surveyed were in favor of marijuana becoming legal. No longer is it just a pipedream held by dreamers holding pipes, but the legislation surrounding the issue has evolved into a potentially election-shaping issue.

It’s no surprise for an incumbent president to introduce controversial issues, hoping to drive voters to the ballots on the back of the subsequently created contention.

George W. Bush did it in 2004, by pushing to position anti-gay marriage legislation on the ballots in swing states, in an effort to motivate the more hardcore of conservatives to vote in droves. Considering the closeness of Bush’s triumph over John Kerry, the argument could be made that Dubya’s ploy ensured he would spend another four years in the White House.

In 2012, the key component in the election is the continuation of Obama’s engagement with the youth vote.

The Democratic Party has long pursued ways to engage young Americans, mainly due to the fact that they predominantly vote Democratic.

And given that young people are more likely to roll a doobie than buy a packet of Marlboro Reds, it’s a logical step to assume that the youth vote would support any such move to legalise marijuana.

But, lets face it: young people wanting to make weed legal is not exactly anything new. And for all the youthful exuberance and support for any proposals, starting down the path of ‘pot reform’ was political suicide.

However, on a state level, it’s clear that many governments are moving past the 1990s ‘drug-war’ vernacular, buoyed by a series of supporting statistics.

FBI statistics reported that 81 per cent of all drug-related crimes in the US are a result of possession, with marijuana accounting for 46 per cent of the overall figure.

Some estimates have declared that the arrests – and subsequent procedures – cost upwards of $10 billion. Considering that there is little evidence to suggest that arrest rates have any effect on drug use, it seems like an awful lot of money to be spending on nothing.

As of June 13, 15 states have decriminalised marijuana, with Rhode Island the newest member to the weed reform clique. In Rhode Island, penalties for being in possession of small amounts of pot are on par with getting a parking ticket.

Pro-marijuana votes haven’t exactly been a success in the past, with California turning down a proposal in 2011. But all signs seem to be pointing towards the fact that this could be the time for the issue to be broached.

Not only is it an almost bona fide vote-winner amongst young voters, but overall acceptance is on the rise, meaning that there is less risk for the reward for Obama.

If legislation is introduced before November, the President will just be hoping that those supporting the issue are able to pick themselves up off the couch and hit pause on Wayne’s World or Dazed and Confused to make the gamble pay off.

Liam Quinn is a second-year Bachelor of Journalism student at La Trobe University, and is currently on exchange at Michigan State University.  He is covering the 2012 presidential elections for upstart.  You can follow him on Twitter: @liamquinn23.