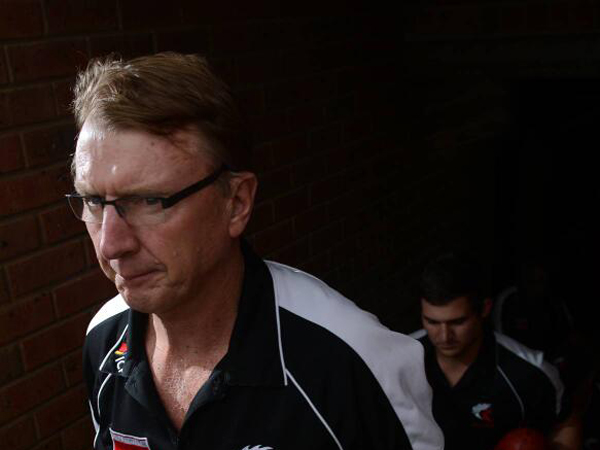 Gerard FitzGerald is no stranger to success, but his remarkable career has been also shaped by disappointment.

The senior coach of Victorian Football League club North Ballarat has experienced both the elating highs and frustrating lows of Australian Rules Football.

But no matter the result in today’s clash between the Roosters and Frankston, the game should only be a cause for celebration.

The 56 year-old tells upstart that the milestone is a “massive honour.”

“I say that because of the fact that I love coaching,” FitzGerald says.

It has been a long road for FitzGerald, having grown up with ambitions to play football and cricket at the highest levels.

In 1976, FitzGerald represented Victoria for the national cricket championships in Perth. Later that same year, he was running laps with VFL side Geelong

FitzGerald eventually made the senior list for the 1977 season, but he only managed three games, for a serious knee injury put an early stop to his playing aspirations.

“My knee injury turned out to be very, very severe,” he says.

“After a while [of being on the sidelines] I had to decide ‘well, okay, am I going to get on with life?'”

FitzGerald had discussions with those around him regarding his future, and once it became clear that his playing career was effectively over, he decided to move on to another passion – teaching.

He relocated to the red soils of Sea Lake, having accepted a vacant teaching position, as well as the role of football coach.

FitzGerald would eventually move to other areas of country Victoria to coach, including “eight great years” at Mortlake and a brief stint in Camperdown.

The AFL Victoria Life Member says he learned a lot from coaching football in the country.

“I had to try to learn the skills to motivate people who were playing football for a variety of reasons – that was the first thing.

“The second thing was that I had to learn how to attract volunteers to the club and retain them.

“It was a very broad task. I was the person responsible for the club in the community,” he says.

At the end of 1996, FitzGerald was appointed senior coach of the North Ballarat Roosters. He quickly brought success to the club, reaching a preliminary final in 1998 before falling short in the 1999 Grand Final to Springvale.

But the Roosters would suffer another grand final loss the following year, losing to Sandringham by just two points.

FitzGerald ultimately moved away from the club at the end of 2002, with brief periods at Springvale and Port Melbourne, the latter of which he again took to an unsuccessful grand final.

FitzGerald’s first three trips into VFL grand finals had all been fruitless.

He returned to North Ballarat at the end of 2004, coaching the Rebels in the TAC Cup competition for two years before resuming his place as head coach of the VFL side by 2007.

He took the club to a preliminary final in his first year back, but it was in 2008 when he finally achieved the ultimate glory.

FitzGerald regards the 2008 premiership against Port Melbourne as his proudest coaching achievement.

“It was just an absolute, total exhilaration of a feeling,” the North Ballarat Football Club Life Member says.

“Just to think, for all the challenges and the setbacks previously, to then be part of a premiership.

“To be the coach of their inaugural premiership in the VFL…it will sit in a very significant part of the club’s really great history. It was special to be a part of that.”

FitzGerald acknowledges coaches David Parkin, Robert Walls and, more recently, Brad Scott as people who have influenced him, and says that relationships are key to getting the most out of his footballers.

“I would like to think I have time for people,” he says.

“I would like to think that I have a really strong interest in having a positive influence on my players, both as footballers and as people.”

He also says that his family, including his wife Loretta and their three children, have been a significant part of his journey.

“My family gives me great diversity,” he says.

“I’ll have dinner with them on Saturday night and I think I’ll reflect with them that they (his children) would never have known me as other than a coach…I’ve been involved in coaching every year that they’ve been in the world.”

As for the future?

FitzGerald says it’s the club, and the people within it, that keep him turning up every year.

“I’m in a privileged position where I just work with terrific young people, who are my players,” he says

“But I’m in a privileged position where I work with a huge number of people who are involved with a high-quality football club.

“That’s what keeps me going.”

Today will not only be a celebration of a fine coach and a remarkable football person – it will be a testement to the power of optimism and perseverance.