Sam Carnibella has established himself as a strong competitor in the hot jam donut business. 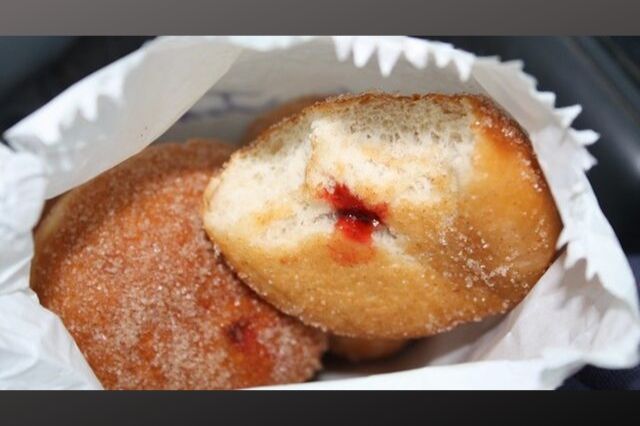 There is a familiar scent that travels across Preston Market. The scent is both sweet and inviting, however it particularly invokes childhood memories of time spent at the footy, carnivals and markets.

The recognisable scent belongs to Sam Carnibella and his van which have provided visitors with their hot jam donuts for 12 years.

Carnibella’s entry into the business is quite unique. After spending a considerable amount of time working in a corporate environment as a mechanical engineer, he is adamant that this was not what he wanted to spend his life doing. Carnibella had a desire to run his own business, and when the opportunity arose, he took it and now he produces hot jam donuts.

The skills Carnibella developed as a mechanical engineer are put to use inside the donut van. In what can only be described as being resourceful, he has developed a lot of the equipment he uses himself. Equipment such as jamming guns and heat and humidity-controlled chambers have helped him streamline the production process, while ensuring he is able to keep up with the growing demand for his donuts.

“This is equipment that I wasn’t able to find from commercial bakery equipment suppliers, so I had to adapt and scale them down to make them suitable to operate in a donut van,” he told upstart.

Carnibella recounts memories of when he first started his business and used hand operated equipment to produce donuts. One example that Carnibella references is a handheld jamming machine that he would use to fill the centre of the donuts with jam.

“I found that at the end of the week my arm would be numb from jamming,” he said. “We would get busier, so you had to jam faster and to do that for 10 hours a day, it forces you to think of other ways.”

Carnibella’s attention to detail, combined with a strong hot jam donut culture in Victoria has played a large role in his success. Hot jam donuts are both iconic and local to Victoria and the element of being served from a van is also unique. As the only state who sells hot jam donuts, Victoria continues to entice interstate visitors to indulge in the donuts that have become a symbol of their “foodie culture”.

“The hot jam donut culture in Melbourne is distinct and unique,” Carnibella said. “I have customers that move interstate and when they come back to Melbourne they come to the van and reiterate that they can’t get these donuts anywhere in Sydney or Queensland. The culture is engrained and native.”

“Customers want to introduce their kids to our donuts; they want to share the experience. If you create a genuine product, the customers will follow.”

Other variations of donuts such as the Nutella filled donut have tried to break into the Victorian market, however none have reached the same popularity levels of hot jam donuts.

“I’m from an Italian background and I know that the essence of real Italian cooking is that it is simple and uses few ingredients – I think the same goes for hot jam donuts,” he said. “It’s not a fad, it’s established. It doesn’t purport to be something that it’s not, it doesn’t rely on social media to drive its sales.”

By residing in a multicultural epicentre of Victoria, Carnibella’s donuts are embraced by different ethnicities. Longstanding migrants from the 1950s are Carnibella’s regulars, however he’s seen a new wave of ethnicities embrace his donuts.

“Vietnamese and Indian customers often show curiosity as they watch the lines of people form,” he said. They’ll try it and eventually they adapt. They come back and buy again. Every community comes to love the flavour.”

Carnibella says he is rewarded through the satisfaction he is able to provide his customers.

“I like seeing family’s come to purchase our donuts. I watch them step aside huddle around and each grab a donut and start eating. They look at each other while eating and their eyebrows raise and you know that they’re enjoying it as a family. It’s simple enjoyment.”

Photo: ‘Hot jam donuts’ By Vicky available HERE and used under a Creative Commons Attribution. The image has not been modified.