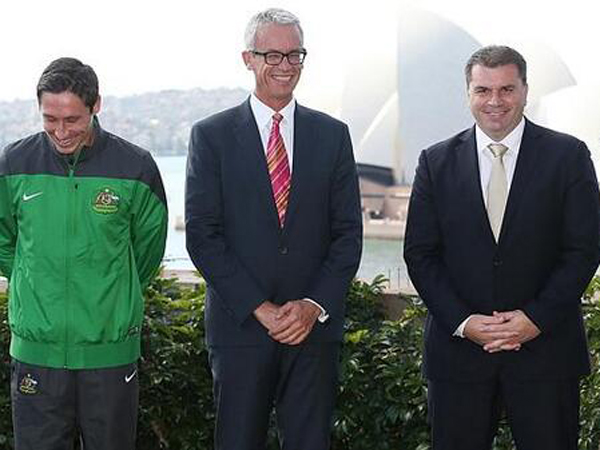 The 30 Socceroos vying for a ticket to Rio have been named and upstart gives you a detailed explanation on what to expect come Australia’s first World Cup match against Chile on June 14.

The 23-year-old keeper is the most likely of the four to be cut when Postecoglou chops seven from his list in early June, but will gain great experience from his pre-tournament training. Birighitti is a great shot-stopper, but is susceptible to aerial threats. His form at Newcastle has recently earned interest from German side Bayer Leverkusen.

Ever-present once again for Adelaide United this season, the 32-year-old has earned his spot in the squad for a series of consistent performances at A-League level. Galekovic will most likely start as Australia’s third-choice keeper in Brazil, but is a reliable option for Postecoglou and will provide experience for his two younger compatriots.

Despite only making seven appearances for last season’s Champions League runners-up, Borussia Dortmund, Langerak has excelled dramatically during his stint in Germany. He didn’t manage to take his chance in the last warm-up match, sent off against Ecuador, but will relish any opportunity in Brazil. He should be Postecoglou’s back-up come June.

An exceptional season in Belgium has seen the 22-year-old leapfrog a number of respected candidates for the No.1 shirt in Brazil. With great reflexes and, more importantly, fantastic composure between the posts, Ryan could easily fill Mark Schwarzer’s boots for the next decade. His former Central Coast manager, Graham Arnold, revealed earlier in the week that his form at Brugge has even earned the youngster the interest of Spanish giants Real Madrid.

Even the boss thinks it’s a joke: FFA chief mocks Socceroos slogan. But is it the worst? http://t.co/mGiD5MOobl pic.twitter.com/pVQVe2XVlM

One of Postecoglou’s most surprising decisions was calling up the 21-year-old Newcastle utility. However his form throughout the season has earned Brillante the opportunity. Able to play in a variety of positions across the defensive line and in midfield, Brillante is a natural right-back and starred for Australia’s Under 23s side earlier last year.

Australia’s troubles at left-back have been well documented, but in Davidson, Postecoglou might have finally found a long-term solution. The 22-year-old has been a consistent performer in Holland throughout the season and, although he has struggled at international level, may need to be persevered with throughout the tournament.

As a player that Postecoglou knows well throughout his time at Brisbane, Franjic has quickly morphed into one of Australia’s most reliable options in defence. Quick and with an eye for a pass, the right-back could form a lethal partnership with the squad’s tall front-men. However in Brazil, he may need to adapt his game to become more solid defensively.

Although he looked promising in his international debut against Ecuador, Good’s long-term injury, suffered in the friendly, has meant that the 21-year-old hasn’t played for almost three months. But with a solid season on-loan at Scottish side Dundee under his belt, Good is likely to be Postecoglou’s first-choice centre-half in Brazil.

Able to play a number of different positions, McGowan has a breadth of experience under his belt despite his young age. The 24-year-old, who is adept at playing either as a central defender or in holding midfield, spent the best part of his career in Scotland at Hearts, before moving to China early last year. He could be taken on versatility alone.

It’s almost remarkable to think that, at 25 years of age, Spiranovic adds the experience to Australia’s defence. Stints in Germany and Japan have moulded Spiranovic into the defender he is today, while his form at Western Sydney has led the A-League’s newest club to successive grand final appearances. He will be one of Postecoglou’s first names on the team sheet.

A fine career at Central Coast earned Wilkinson a high-profile move to Korea, where he has continued to flourish at the back. However the imposing defender didn’t make the best account of himself on his international debut, enduring a torrid time off the bench against Ecuador. Whether that counts against him come the announcement of the final 23 in June remains to be seen.

At 32, Wilkshire is one that will add much-needed experience to a youthful Australian side. Still plying his trade consistently in Russia, Wilkshire appears second-choice for the spot at right-back. However with the Socceroos playing against some star-studded, possession-oriented sides, he may find a place as a defensive winger.

One of Postecoglou’s bolters, Wright comes into Australia’s 30-man squad as one of only two uncapped players. However a consistent season in England’s third division, where the 21-year-old has starred at Preston North End, has led to Wright being selected in the preliminary squad.

Consistent performances for Central Coast earned Bozanic a dream move to Luzern almost 12 months ago. In Switzerland, the left-winger’s game has continued to improve and develop. Although he has only two international caps under his belt, Bozanic is an experienced campaigner and wouldn’t be the worst option off the bench in Brazil.

Although Bresciano appeared out-of-favour under Postecoglou, the experience of the midfielder has earned him his place in the squad. At 34, Bresciano still has an immaculate range of passing and the ability to drive forward and score goals. He could also become a valuable mentor to young teammates.

A fantastic end to the season from Halloran in Germany has led to the 21-year-old earning a surprise call-up in Postecoglou’s squad. Most comfortable playing on the left, Halloran adds natural width, but also the ability to create angles for goal-scoring opportunities. Although he is uncapped, he could surprise many as an exciting impact player if chosen in the final 23.

After playing consistently in the highest echelon of European football, the Champions League, throughout the season, Holland is a potential starter in Brazil. A deep-lying midfield player, Holland is yet to be tried in Postecoglou, but appears the ideal partner for the likely captain, Mile Jedinak.

Australia’s skipper in the lead-up matches, Jedinak will shoulder the brunt of responsibility in midfield in Brazil. After enjoying a fantastic season captaining Crystal Palace to survival in the Premier League, Jedinak has proved he is able to match it with Europe’s elite. The 29-year-old is far and away Australia’s most important player.

He was a surprise call-up for Australia’s friendly against Ecuador, but the 21-year-old seems to have impressed Postecoglou. More of an attacking midfielder who likes to control the play behind the striker, Luongo could be a decent option to have off the bench in Brazil. Still, he could be an outside to make the final 23.

One of the most pivotal players in Brisbane’s Championship-winning season, McKay could fill a number of holes for Postecoglou. Able to play virtually anywhere in midfield and defence, McKay will most likely see his favoured position on the left wing. But in Brazil, he could find himself plugging numerous gaps throughout the side.

Originally a defender, Milligan’s ability to convert himself into a high-quality holding midfielder is a testament to his talent and highlights his importance in this squad. The Melbourne Victory captain drew interest from Premier League side Crystal Palace last season and will look to cement his spot in the Australian starting lineup come June.

At just 22, Oar is vastly experienced for someone of his age. Plying his trade and playing consistent football in Holland, the left-winger is one of Australia’s brightest young talents and will add pace, flair and width to the team. Oar is a likely starter on the flanks for the first game against Chile.

No one quite knows what to expect from Rogic coming into Brazil. A promising start at Celtic put the 21-year-old attacking midfielder on the European football map, but his growth has since been stunted by a lack of first-team football. A relatively uninspiring loan spell at Melbourne Victory didn’t help, but he remains an exciting prospect and a likely starter for the Socceroos.

Alongside Tommy Oar at Utrecht, Sarota has been a standout in Holland this season. A right-winger full of pace and skill, with a great temperament to match, Sarota could provide a fantastic option for Postecoglou in his squad. Whether he earns himself a starting berth for the opening match is another question.

A move to Switzerland was just reward for a fantastic few seasons at Adelaide United for Vidosic. The attacking midfielder, who will battle with Tom Rogic for the No.10 position in Brazil, appears to be growing more and more in favour for a place in the starting lineup having had a wonderful season at Sion.

What more can you say about Cahill? Australia’s all-time leading scorer, the striker will go into the tournament as the Socceroos’ most likely avenue for goals. Still a consistent scorer in the American league, Cahill remains as dangerous as ever in the air and a lethal finisher on ground level.

Despite scoring the goal that sent Australia to Brazil, Kennedy remains an outsider for a spot in Australia’s final 23. A towering and imposing striker, the veteran striker isn’t seen as a viable option for Postecoglou’s slick passing style. However he could provide a reasonable ‘Plan B’ from the bench.

Used as a right-winger under Postecoglou thus far, Leckie prefers playing in a central striking role and could adequately fill the position if Cahill is forced deeper into midfield. With pace in abundance, Leckie struck 12 goals from 28 starts in Germany this season. He’s certainly one to watch in Brazil.

After winning the A-League’s Golden Boot prize this season, Taggart has flown into World Cup contention. The 20-year-old, who enjoyed the best campaign of his career, scored 16 goals from 25 matches for Newcastle to earn his place in the squad. Although he’s one of the youngest picked, Taggart is likely to make the final cut and get a ticket to Brazil.

A season away from Italy, on loan at Melbourne Victory, has reinvigorated Troisi’s career. He managed 12 goals from 26 appearances, challenging Adam Taggart for the Golden Boot. The two will most likely go head-to-head once more in a month, this time to decide who earns the final striking role in Brazil.