Both residents and outsiders are working to raise awareness about the Basin policies. 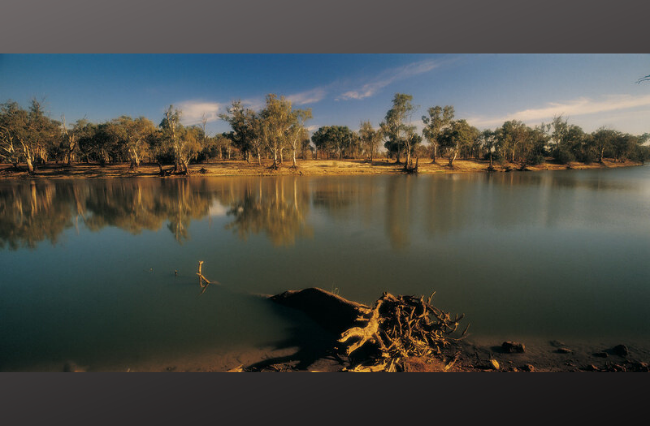 The decision to put her family farm on the market earlier this year was a heartbreaking one for Shelley Scoullar and her family.

“I guess that nagging feeling was growing deeper and deeper that this is taking a really long time to turn around and each year we’re getting older,” she told upstart. “We just felt that we were going to be hamstrung by water policy that was taking too long to turn around, and we had to make a really tough decision.”

Scoullar’s decision comes after a policy implemented as part of the Murray-Darling Basin Plan (MDBP) left her and thousands of other farmers along the Basin without access to water that they can physically see running past their barren paddocks.

The Murray Darling Basin is home to over 2 million people and covers 1 million square kilometres of south-eastern Australia, spanning from Queensland down to South Australia.

The Basin Plan was created by the Murray-Darling Basin Authority (MDBA) in 2012 with an aim  “to bring the Basin back to a healthier and sustainable level, while continuing to support farming and other industries for the benefit of the Australian community”, with the science behind it reviewed independently by Australian and international scientists.

However, the Basin Plan in action has left farmers like Scoullar scratching their heads, as water allocations are lowered to the point of now being at zero percent, and much more water is going to the environment and to keeping estuarine systems artificially fresh.

“I am lost for words,” Scoullar said. “The wastage of water through running the river beyond capacity when it could be used to produce food is so disheartening, it’s really disheartening. We should be praising them [farmers] and having them on pedestals, and instead, they’re going backwards and watching the river waste water. That’s what crushes me.”

Having experienced firsthand the effects of the MDBP, Scoullar created an activist organisation called Speak Up 4 Water as a way to raise awareness and educate people about the Plan and communities affected by it. But it’s not just residents expressing their concern for the region, either.

Documentary-maker Topher Field took a roundabout route to making his video series on the basin plan. After unsuccessfully applying for Andrew Denton’s show ‘Project Next’ over ten years ago, Field uploaded his application video about the Wonthaggi Desalination Plant to YouTube with zero subscribers. Unexpectedly, the video took off, gaining a few thousand views, and with it, Field started getting people approaching him with ideas for other videos, one of which was the MDBA.

“Early this year [2019] some people reached out to me and asked me to come back to the MDBA and create a follow up to my earlier work,” he told upstart. “As I discovered just how bad things were I realised I couldn’t say no.”

After found himself looking into what was happening in terms of the Basin Plan, he felt he had to do something, undertaking extensive research to create a four part video series that now has more than 1 million views on Facebook.

Field’s series explores the complications and issues surrounding the drought, the MDBA, and the farmers and communities it directly impacts, with a target audience of ‘born and bred city kid(s)’ like himself.

“Imagine taking Australia with a population of 25 million people and reducing our food supply to the point that only 16 million people can eat enough to survive,” he says. “What will happen? What will happen to the prices of the remaining food? Clearly lots of people will die, and those that survive will have to pay massive  prices for their food… Well that’s exactly what’s happened with water and our irrigators.”

While people in cities around Australia have been somewhat isolated from the repercussions of the Basin Plan, experts say in time they may notice a spike in prices and an overall decline in freshness as more food has to be imported from overseas.

However, Field believes where the real impact will be felt is in countries who are on the margins of famine and are struggling to afford food on the global market as it it.

“When Australia produces a surplus of food, we not only feed ourselves but millions of other people world-wide, which puts downward pressure on food prices and helps people in poverty to be able to eat and feed their families,” he said. “What the MDBA has done is going to lead to Australia becoming a net importer of food, and this means we will become a burden on the global food chain, not an asset!”

Scoullar can also see the potential in outcomes like this becoming a reality as a result of the Basin Plan.

“I wanna turn it around because, if we don’t have irrigated agriculture in Australia, and we are very good at what we do, we are very good at irrigated agriculture, we are efficient, and all that food production goes to a third world country, they don’t have the technology that we have, then there is child labour and slave labour, we treat our people right.”

Speak Up 4 Water, Scoullar’s group now has over 4,680 likes on Facebook and has gained enormous momentum since it was established in 2015.

“We have brought the attention of the Basin Plan. We have done a tremendous job on no budget. I’m really proud of what we have achieved, but I was probably naive in thinking I could change everything around in a couple of years.”

However, Scoullar is concerned for the future of irrigation farming in Australia.

“What worries me is, people my age, if they’re walking off the land and, those are skills, who is going to teach the next generation?”

Article: Phoebe Doyle is a first year Bachelor of Media and Communications (Journalism) student at La Trobe University. You can follow her on Twitter at @phoebedoyle_

Photo: by Tourism Victoria available HERE and used under a Creative Commons Attribution. The image has not been modified.