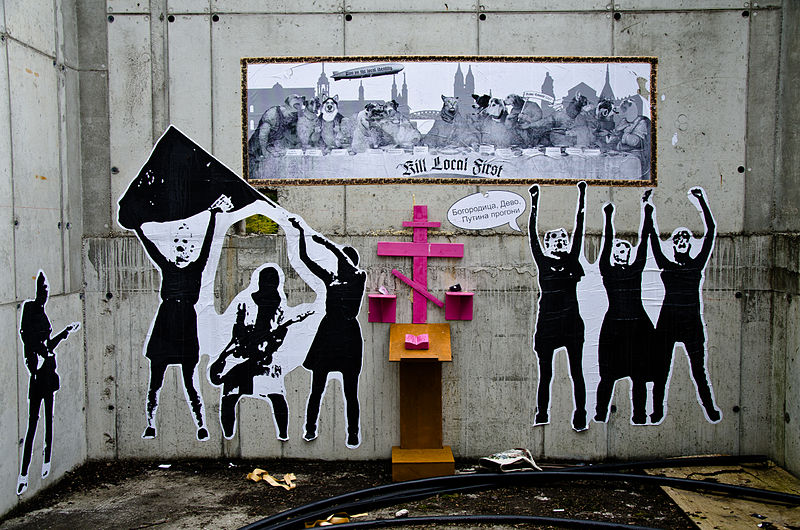 In February, the three members of Pussy Riot stormed the altar of Moscow’s Christ the Saviour Cathedral in bright-coloured balaclavas and clothes. The band belted out a ‘punk prayer’ against the Prime Minister of Russia, Vladimir Putin, causing their arrest and a great deal of controversy. The judge argued their actions were blasphemous and sentenced the group to two years imprisonment.

Their actions had major political connotations. Pussy Riot have often been characterized as standing for individual freedom and anti-establishment views. Russia has been under the command of Putin for 12 years. The lyrics of their music have typically focused on criticizing his government.

Worldwide support was expressed in various ways when activists gathered outside the Moscow courthouse.

Unfortunately, Pussy Riot aren’t the only artists to have been targeted for offensive behaviour.

In 1985, two young men from Nevada, U.S.A, shot themselves after a night of binge drinking, drugs and heavy metal music. Eighteen year-old Raymond Belknap died instantly, whilst 20 year-old James Vance survived with a disfigured face. He died three years later from a drugs overdose. The families had accused the heavy metal band Judas Priest and their record company as instigators of the child’s act. They alleged that the band had incorporated subliminal messages into several of their recordings, such as ‘do it’ and ‘I took my life’.

Unlike Pussy Riot, their case was dismissed after evidence was given about the boy’s depression and violent upbringing.

In 1984, Ozzy Osbourne was blamed for the death of 19 year-old John McCollum, who shot himself while listening to Osbourne’s Suicide Solution. Similarly, the case was also dismissed due to the teens history of clinical depression and alcohol abuse.

During the ’80s, heavy metal was regarded as satanic and often targeted by religious groups. Known as the ‘Satanic Panic’, some Americans feared children could be physically and psychologically affected by the music. A number of parents also chose to conceal their children’s issues and scapegoat the artists as responsible.

In 2010, Iranian singer Arya Aramnejad, was imprisoned after a court found his song, Ali Barkhiz, denounced the Islamic regime’s actions during the 2009 Ashura protests. Arya claimed in court he had been tortured by Iranian policemen.

The National Cohesion and Integration Commission have begun preliminary investigations as well as disseminating that they ‘will not hesitate to open charges against the three as well as any media which has been playing the songs’.

These are just many examples of when a government has overridden an author’s artistic merit. In the midst of the punk prayers scandal, the question that has once again arisen is when is art irresponsible?

Silencing art oppresses the author’s freedom to express themselves. Art can represent societies values and silencing an artist’s work may mean silencing the community as a whole.