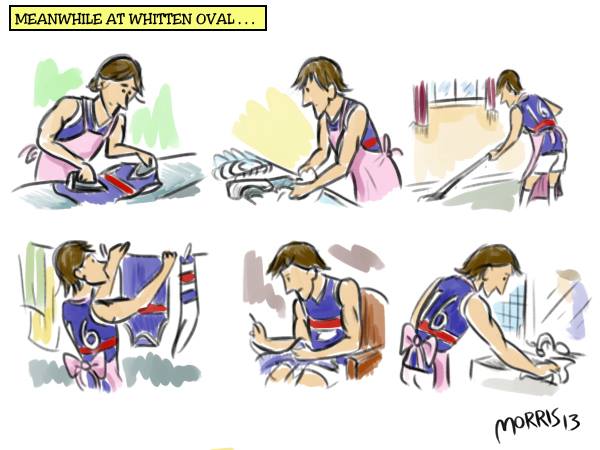 Although widely considered the Dogs’ most talented player coming into this season, Ryan Griffen was far from their most vocal and perhaps not even their most consistent.

The midfielder’s quiet, reserved nature meant that he was likely not earmarked or recognised as a future leader down at the kennel.

But such is the nature of a rebuild at a football club that all those associated must learn to sacrifice to a certain degree.

Selflessness is a buzzword, particularly for senior players who need to be magnanimous by taking the initiative on the field, in order to lead and educate younger teammates rather than burdening them. Griffen has these qualities in abundance.

The idea of self-sacrifice is a philosophy ingrained in Western Bulldogs coach Brendan McCartney’s teaching methods.

“As I have seen time and time again, once you create a selfless environment in any club, then great players emerge off the back of that,” McCartney wrote for an AFL column.

Griffen, is the most prominent of the players to rise under this prophecy.

The 27-year-old has elevated his game to new heights, in 2013, and in the absence of captain Matthew Boyd has materialised into the sort of midfield general required to not only show the younger pups how to play, but to also steer the club into a new era.

“We’ve seen the quality that Ryan Griffen is as a leader and as a player and he has really stepped up in that role when I’ve been out,” Boyd told The Age.

A 34-disposal game against Carlton on Saturday marked the twelfth time this season Griffen has had 30 disposals or more and the thirteenth game, out of a possible 17, that he’s been named amongst his side’s best players.

This idea of selflessness that McCartney refers to is perhaps the key to Griffen’s transformation as a player, and arrival as a forerunner.

Club legend Scott West in a separate interview with The Age appears to second this notion; citing leadership and responsibility as key reasons for Griffen’s meteoric rise.

While Griffen still doesn’t set the standards volubly, particularly compared to some of his louder teammates, he has instead found his niche in forming the club’s blueprint of hard work and consistency with his actions.

With a side largely constituted of players with 50 games or less, Griffen has learnt to accumulate possession off the back of his own labour, to continue to fight when his teammates tire.

Once recognised almost solely as a smooth moving outside midfielder known for his side step, speed and pizzazz, the South Australian has added a hard edge to his game that has seen him make the transition to an elite player.

His top 10 ranking in a number of key statistical areas this campaign have been impressive. His inside 50s, disposals, contested possessions, and clearances are reflective of this dynamism, so too is his recognition as the ninth best player in the competition according to the Vero player rankings.

Most crucial of all, Griffen’s valiant performances have prompted a renaissance in his side’s results, especially in the season’s latter stages and his tenacious style of play appears to be rubbing off on his teammates.

The Dogs have won three of their last six, which is a seemingly unspectacular stat until you consider that three of those losses were against key finals aspirants – Hawthorn, Essendon and Sydney.

In all three fixtures, although they ultimately succumbed, Griffen and the Dogs managed to remain highly competitive until the final siren – a fact validated by their victory in the contested possession count as well as their impact on the scoreboard.

Key ingredients to their victories against West Coast and Carlton, were that they were noticeably more desperate and hungrier than their opponents.

Nevertheless, in spite of his gallant acts many have still overlooked Griffen’s contributions in 2013.

Despite being recognised amongst only a handful of the best midfielders this season, the fact he is not a member of a strong team means he is unlikely to be rewarded with All-Australian honours. So much has been demonstrated by phantom selections so far, anyway. 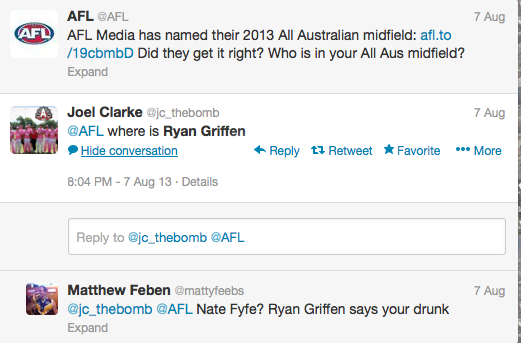 Yet, true heroes are often the unheralded ones and when the Dogs do enjoy some sort of success Griffen will have his day.

James Gray-Foster is a third-year Bachelor of Journalism student at La Trobe University. You can follow him on Twitter @JamesGrayFoster

Artwork by Hayden Morris. Hayden is a third-year Bachelor of Sports Journalism student at La Trobe University. You can find more artwork on his blog: http://haydenmorris.tumblr.com/