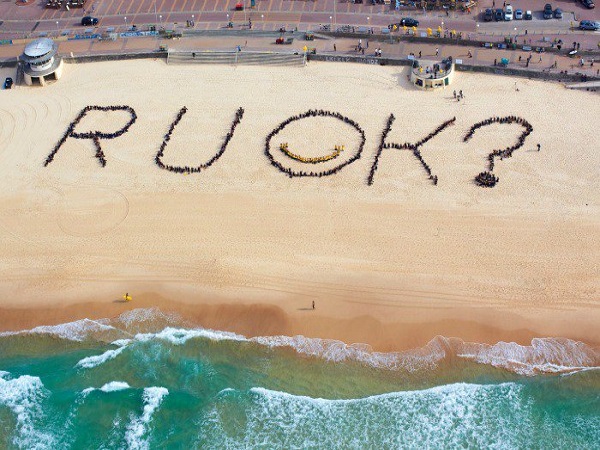 A simple question and conversation can save someones life.

Today, Australians nationwide are being encouraged to have meaningful conversations about life’s ups and downs by simply asking the question – “Are you ok?”

Founder of the R U OK? Day campaign, Gavin Larkin, lost his father to suicide in 1995, inspiring him to start the suicide prevention day to protect other families from enduring the impacts of suicide. Losing his life to cancer in 2011, his legacy lives on with the small question making a big difference.

“While balloons and cupcakes can be a great excuse to bring the community together, it’s our aim that these opportunities are then used to remind people that we can all ask, listen and not judge, encourage action and regularly check in with those around us,” she tells upstart.

To spread the message, the non-profit campaign encourages bringing people together through hosting events at work, school or in the community.

A sausage sizzle, a breakfast, lunch or dinner, or a wear yellow day at work, are some of the examples of R U OK? events that can be hosted.

Lewis says the R U OK? campaign is unique because it initiates important and meaningful conversations about mental health problems.

“A lot of other mental health and suicide prevention charities focus on encouraging the person who’s not feeling so well to speak up and ask for help,” she says.

“Conversely, R U OK? puts the responsibility squarely on the shoulders of the family and friends of that person to initiate the conversation and give them, if they’re comfortable, an opportunity to share what they are going through.”

Crisis support and suicide prevention phone service Lifeline received more than one million calls for help in 2015, setting a new high in the charity’s 52-year history.

Over its seven years of running, the R U OK? campaign has been combating the suicide rate with the help from sponsors and celebrities.

Lewis says celebrity support is important because it helps inspire others to ask the question.

“Genuine and authentic celebrity support is so important because it helps us to convince more people that asking ‘are you ok?’ is something that their heroes and sporting legends are doing, and therefore something they should be doing too,” she says.

“Celebrating people from all sorts of backgrounds and ages makes it easier for people across Australia to identify with what we’re saying and motivates them to get involved.”

Vital to the R U OK? Day campaign gaining awareness is social media, but Lewis says social media can be both beneficial and unhelpful in spreading the organisation’s message.

“Social media has helped us enormously to get the message out there,” she says.

“The challenge for us is to ensure people appreciate that social media is the perfect place to celebrate people who are great mates and ask the question, reinforce that starting conversations is something we should all be doing, and reinforce the ways to start and manage a conversation.

“On the other hand, it’s not necessarily the best place to start that conversation because it’s too easy to conceal and masque what’s really going on in our lives.”

The campaign is utilising social media with a competition. Participants are required to upload a photo of anyone who makes time for others and asks “are you ok?” using the hashtag #ruokday. Prizes are up for grabs, including travel vouchers and Samsung phones.

To seek help or get more information on suicide prevention, you can visit R U OK? or call the 24/7 support service Lifeline on 13 11 14.