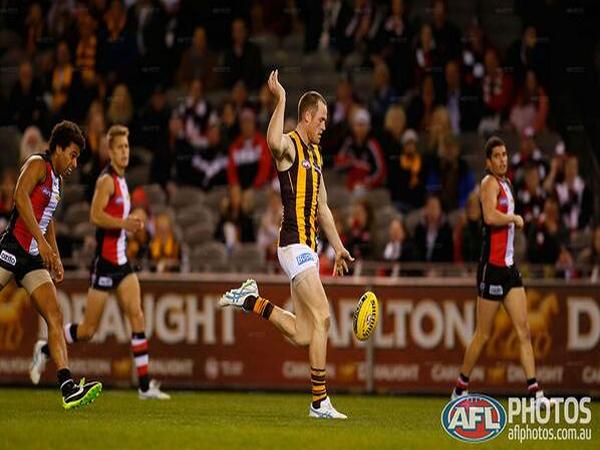 As the 2013 home-and-away season draws to an end, this year’s first major gong will be awarded on Sunday, with the race for the Coleman Medal, potentially, going down to the season’s final day.

Barring a miraculous haul from one of the previous two winners, Jack Riewoldt and Lance Franklin, the AFL’s leading goal kicker in 2013 will win the Coleman Medal for the first time.

Roughead’s season has been extraordinary. He has managed to shake off his role shadowing Franklin, solely up forward, by adding to his CV, excelling as a backup ruckman and rover across the ground.

He is regarded as a firm favourite to take out Hawthorn’s best & fairest in 2013, and proved invaluable during the middle of the season, when Franklin’s absence through injury left a void up forward.

Of the leading quartet, in the race for the Coleman, he has had the most possessions, averaging 16 per match, and twice the number of handballs to his next contender.

The fact that he has amassed 50 clearances around the ground this year, speaks volumes of his incredible influence at stoppages. The other three contenders have managed one clearance between them.

Travis Cloke has been a colossal again for the Pies this season, averaging nine marks a game, five of those inside the forward 50, streets ahead of the other Coleman contenders.

Inaccuracy in front of goal may be Cloke’s ultimate downfall. His dismal 48 per cent conversion rate is roughly 15 per cent behind the other trio. Considering the abundance of delivery Cloke demands as Collingwood’s number one target, he only has himself to blame for not clinching the Coleman.

The Pies face North Melbourne this week and Cloke will hope to stay isolated inside 50 – most likely up against Luke Delaney or Lachie Hansen – giving him an outside chance of claiming the goal-kicking honour.

Josh Kennedy is one of the formidable tall timbers in the Eagles’ forward line, but his manic forward pressure sets him apart and sees him lead the contenders for tackles, accumulating triple the number of both Cloke and Cameron.

A lead-up target who often benefits from the attention given to fellow high-flyers around him, Kennedy’s unique ‘Fred Flinstone-esque’ goalkicking routine has rewarded him this season.

Along with Roughead, Kennedy has accumulated nine more goal assists throughout the year. Such a selfless and team-oriented statistic remains essential from a team perspective, but in terms of the race for an individual award, it may unfortunately come back to bite Kennedy.

Finally, Jeremy Cameron is more than deserving of a chance to claim the Coleman medal in just his second season. In a side with only one win to its name from 22 attempts, Cameron’s ability to seize his chances with the lowest number of disposals, is illustrative of his raw talent.

Highlighted by the ten running bounces he’s accumulated (compared to a combined three for the other contenders), Cameron has utilised his athleticism to score his goals. With half the number of free kicks (15) for the season, compared to both Cloke and Kennedy, marks on the lead and trademark snaps have become his forte instead.

Cameron’s success this season is down to the fact that he has become GWS’s focal point up-front, particularly in the absence of the injured Jonathon Patton.

As the number one forward, the attention he has received from the opposition has become even more concentrated as the season has progressed.

Prediction:  As things stand, expect Jarryd Roughead to claim this year’s Coleman Medal, especially if he manages to kick two or three tonight against Sydney.

Justin Falconer is a second-year Bachelor of Journalism (Sport) student at La Trobe University and is a weekly contributor to upstart. You can follow him on Twitter: @jfalconer6