On a cold December evening in 2005 just days before Christmas, the streets of Point San Quentin, a small seaside hamlet nestled into the hill flush against prison fences, was inundated with more than 2,000 protesters. The blazing floodlights of the prison lit up the scene like a movie set. News anchors and reporters lined up one after the other, providing live commentary every 30 minutes of the unfolding events. 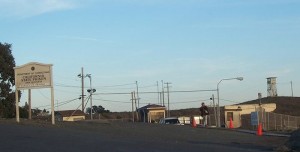 Demonstrators who had gathered on a tree-lined street leading to the gates of San Quentin State Prison endured frosty temperatures to protest the impending execution — the 12th execution since the 1977 reinstatement of the death penalty in California. Small clumps of people in scarves and gloves held candles and sang hymns, while others wandered off alone, gazing into the bay. There were also small, scattered protests around the state.

With its racial overtones and a compelling theme — society’s dueling goals of redemption and retribution — this execution provoked more controversy than any California execution in a generation, becoming a magnet for worldwide attention.

Behind the thick walls of San Quentin, inmate #C29300 started his morning with a bowl of oatmeal, and during the day he met with his lawyers and six visitors. The death row inmate had his visitors brought into his cell one at a time and gave them his formal goodbyes.

At 6 pm, the prisoner was strip-searched, given a set of clean clothes — jeans and a blue work shirt — and placed in a 45-square-foot ‘death watch’ cell only steps from the death chamber. He spent the evening watching TV and reading letters.  The prisoner remained composed, forgoing his final meal and opting only for a couple of small cartons of milk.

Nearby, the injection team began its final preparations in the prison’s converted gas chamber, ensuring that the required needles, tubes and chemicals were in place. A prison chaplain was available to the inmate if he had requested spiritual counsel, but he did not. He also did not request a sedative before the execution.

At midnight, prisoner #C29300 walked into the execution chamber, a semi-octagonal room with a padded green gurney. He lay down and guards strapped him in, one guard keeping a firm yet sadistically comforting hand on the prisoner’s shoulder. A nurse had difficulty finding a vein and accidentally drew blood. The execution team took about 12 minutes to find a vein in his muscular left arm. While the death chamber personnel probed and poked, the inmate repeatedly raised his head and winced visibly, at one point appeared to say, ‘still can’t find it?’

At 12:21 am, the first drug, five grams of sodium pentothal — to make the prisoner unconscious — was pumped into his arm, followed by injections of 50cc of pancuronium bromide to stop his breathing and 50cc of potassium chloride to stop his heart. After a few minutes, his stomach began to spasm and contract. Soon he was not moving, the roomful of witnesses sat in silence. Three of his passionate supporters cried out: ‘the state of California just killed an innocent man.’

Stanley ‘Tookie’ Williams aged 51 was officially pronounced dead by lethal injection at 12:35 am, having spent the past 24 years on California’s death row.

To his supporters, Williams was a man who had turned his life around in prison. To others he was an arch-villain who unleashed a crime wave that forever changed Los Angeles, Southern California, and the United States.

Williams co-founded the Crips — originally called the Cribs — in 1971 with Raymond ‘Tank’ Washington, ‘to address all these neighbouring gangs so that they would leave the majority of my friends alone. My main objective was to destroy all of them and make them bow down and leave us alone, but what happened was I morphed into what I was fighting. We became the monster.’

Williams spent his youth rebounding in and out of juvenile detention. He was a megalomaniac who beat, robbed and indiscriminately shot his rivals and the innocent. By the mid 1970s, he was one of the most menacing figures in South Los Angeles.

In the early morning hours of February 28, 1979, Williams and three friends, smoking PCP-laced cigarettes, were looking to ‘make some money’. After making two unsuccessful robbery attempts, they eventually went to a 7-Eleven store where 26-year-old Army veteran and father of two, Albert Lewis Owens, was working the night shift.

Armed with a shotgun, Williams led Owens to the back room of the store. While one of his companions emptied the cash register, taking $120, Williams ordered Owens to get on his knees and shot him twice in the back.

11 days later, Williams and another man broke down the door of the Brookhaven Motel and shot to death 76-year-old Thsai Shai Young, his wife and adult daughter. He took $50 in cash then left.

On May 3, 1979, Williams was charged with four counts of first-degree murder, three counts of robbery with the use of a firearm and one count of kidnapping. Williams was convicted in 1981 of all four murders. The jury recommended the death penalty; the judge accepted the recommendation.

Transcripts of Williams’ 1981 trial paint a disturbing picture of the gang leader. During the trial, Williams plotted to kill a sheriff’s deputy and an accomplice who was to testify against him, then blow up a bus full of inmates to escape in the resulting chaos. After the jury read their guilty verdict, Williams coldly looked to the jurors and mouthed: ‘I’m going to get each and every one of you motherfuckers.’

While on death row, Williams assaulted prisoners, prison guards, and allegedly ordered gangland murders from behind bars. His repeated violence and intransigence earned him six years in solitary confinement. ‘I gave this place hell,’ he acknowledged.

By 1992, Williams claimed he was a changed man; deeply remorseful for the bloody rampage the Crips had perpetrated across America, and for the gang life that lured in one of his two sons. In 1994, Williams left solitary confinement and declared himself a champion of peace. In the ensuing years, he authored 10 anti-gang books and created the Internet Project for Street Peace. Williams was nominated five times for the Nobel Peace Prize and four times for the Nobel Prize in Literature, and in an ironic twist, he received the President’s Call to Service Award for his good deeds on death row — the first death row inmate to receive the honour.

Williams organised a gang truce summit in Los Angeles with approximately 400 Crips and Bloods. During a videotaped message, Williams renounced his gang membership and spoke against gangs and gang violence. Williams apologised for his role in forming the Crips and the rapid spread of street gangs:

‘Twenty-five years ago when I created the Crips youth gang… I never imagined Crips membership would one day spread throughout California, would spread to much of the rest of the nation… I also didn’t expect the Crips to end up ruining the lives of so many young people, especially young black men who have hurt other young black men… So today I apologize to you all who must cope every day with dangerous street gangs…’

His lawyers tried frantically to save him. Just hours before Williams’ execution, they pleaded with California’s Governor Schwarzenegger for a 60-day stay, arguing that in the 11th hour a witness had surfaced who could shed new light on the case.

The Governor, the Ninth US Circuit Court of Appeals in San Francisco and the US Supreme Court rejected all defence efforts to spare Williams’ life. ‘Clemency cases are always difficult, and this one is no exception,’ Governor Schwarzenegger wrote in a six-page statement rejecting Williams’ bid to have his sentence commuted to life without the possibility of parole. ‘After studying the evidence, searching the history, listening to the arguments and wrestling with the profound consequences, I could find no justification for granting clemency.’

Schwarzenegger noted that Williams never apologised for the murders — Williams maintained he never committed them. ‘Without an apology and atonement for these senseless and brutal killings, there can be no redemption,’ said Schwarzenegger. ‘In this case, the one thing that would be the clearest indication of complete remorse and full redemption is the one thing Williams will not do.’

From a nine-by-four-foot cell, Williams had undertaken extraordinary work to serve humanity in his effort to reverse the destructive legacy of the Crips. ‘I know of my redemption. Believe me. Mine is real,’ said Williams. ‘If you knew me in the beginning and would see me now, you wouldn’t believe it. It’s like night and day.’ Stanley ‘Tookie’ Williams, the redeemed monster that had brought forth a plague of death, destruction and devastation, received his retribution. The monster was dead.

George Galanis is studying the Master of Global Communications at La Trobe University.