The Syrian civil war has triggered the worst humanitarian crisis of our time. Deniz Uzguns asks if Australia is doing enough to help. 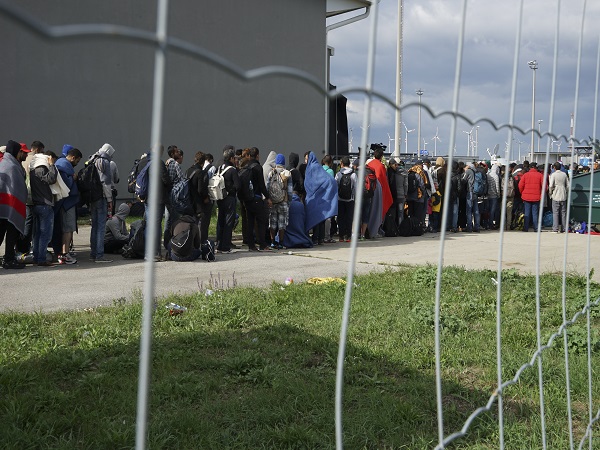 A line of Syrian refugees crossing the border of Hungary and Austria on their way to Germany. 6 September 2015. Image: Wikipedia Commons

The ongoing refugee crisis gripping parts of Europe and the Middle East is a global problem according to European Council President Donald Tusk.

Delivering a speech at the start of a G7 conference in Japan, Tusk called on the global community to show “solidarity” and “recognise the fact that this is a global crisis.”

Entering its fifth year of conflict, the Syrian civil war has caused a considerable displacement of population with more than 13.5 million Syrians forced to flee their homes.

The majority of the refugees are now dispersed across the Middle East with countries such as Turkey, Lebanon and Jordan accommodating more than 4.6 million people.

With few signs to suggest the civil war will end any time soon, many are left wondering whether the wealthier nations can do more to help.

So how do western countries stack up against one another in terms of Syrian refugee intake?

Germany and Sweden are leading the pack with more than 400,000 refugees settled, whilst countries like the USA and Australia have done much less.

Australia’s refugee intake and the public attitude surrounding it has been a contentious topic, with Immigration Minister Peter Dutton’s controversial comments about asylum seekers dominating media coverage earlier this month.

In September last year, the Australian Government announced that it will make an extra 12,000 humanitarian places available in response to the conflicts in Syria and Iraq.

But since the announcement, only around 300 Syrian refugees have been resettled.

In this period, Canada has already reached its target of resettling more than 26,000 Syrian refugees, which is 800 times faster than the rate Australia is resettling them.

Earlier this month, the first Syrian family to be resettled in Australia as part of the humanitarian intake called for the government to speed up the settlement process.

The Kujah family had spent 18 months in a refugee camp in Jordan before being granted a humanitarian visa to come to Australia last November.

“Every country applies a different standard and we don’t measure ourselves by the Canadian standard or any other standard, not a European standard,” she said.

“We believe that our assessment process is the best in the world, the most stringent, the fairest and it produces people that will be coming to Australia who are going to make fantastic citizens.”

Refugee Action Collective spokesperson, Chris Breen, says the government’s intake of 12,000 refugees is not enough to make a difference either globally or in the region.

“It doesn’t even get back to the 20,000  figure that Abbott cut when coming into office,” he tells upstart.

“A humanitarian response would bring real and immediate help, but Australia’s response has been too slow, too little, too hypocritical and too discriminatory.

“The Greens suggestion of 50,000 would be a minimum place to start. Australia takes 200,000 permanent migrants without problem each year.”

When asked whether there is a downside of increasing the refugee intake, Breen says the government is seeking to use refugees as a proxy for fears of unemployment.

“The government uses refugees as a proxy for the idea that there is not enough to go around,” he says.

“This idea can also take purchase in the outer suburbs, which are often planned without adequate public transport or services – but that is not the fault of refugees. It costs a tenth as much to process people onshore as offshore.”

Despite the Coalition’s hardline stance on asylum seekers, 7 out of 10 Australian’s believe the government should be doing more to assist those seeking refuge, according to an Amnesty International survey.

Surveying 27,000 people, the Refugee Welcome Index measured the public levels of acceptance of refugees in 27 countries. Australia is ranked fifth in this index, behind countries such as Germany and Canada.

Sarah Yahya, an international studies student, has been selected as a youth delegate by the Multicultural Youth Advocacy Network and Refugee Council of Australia to go to Geneva and represent Australia for the Global Youth Consultations.

She says that Australia should always open its doors to refugees.

“Refugees have undoubtedly shaped Australia into the great country it is today. To disregard that, it’s simply unacceptable,” she tells upstart.

Yahya says it is false to liken those who are calling to increase the refugee intake as people who are generally from affluent, upper class suburbs and are therefore unaware of the downside of mass migration.

“In my experience, the majority who call to increase the refugee intake are resettled refugees themselves, people who work in refugee or social sectors or people who have, at one point, met someone who is a refugee,” she says.

“They don’t call for an increase in refugee intake without volunteering to help. They are most certainly aware of the challenges refugees will face in Australia and they work collectively to ensure their local community welcomes them with support readily available.”

Deniz Uzgun is a third year Bachelor of Arts student at La Trobe University and a staff writer for upstart. Twitter: @uzgundeniz.