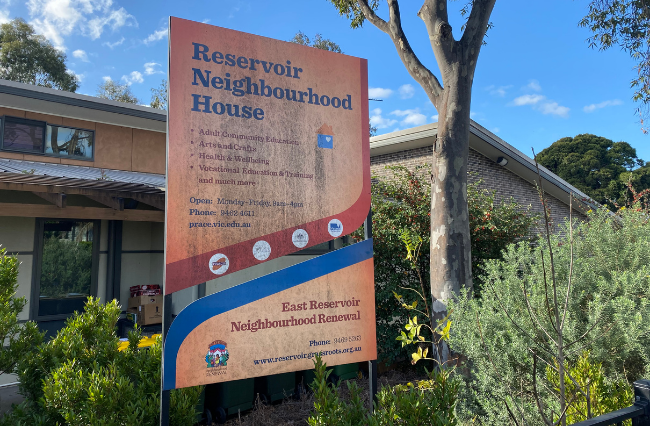 A short walk from Reservoir Station, one block behind Broadway, lies Reservoir Neighbourhood House (RNH). With a shipping container café out the front, shelves to form a community pantry and a decorated street library box, the centre is a hidden gem within the inner northern suburbs of Melbourne.

Upon walking in the front door and approaching the service window inside, you’re immediately greeted by three gigantic smiles. These are the faces of Angie, Kate and Lia, the team who oversee the operation of Reservoir Neighbourhood House.

Services, activities and organisations run out of every space, from Monday’s playgroup in their outdoor play area to Thursday’s computer club in their designated computer room.

But the lifeblood of the house is the service window and adjoining staff office. By fronting the window and answering three questions, “where are you at?”, “how can we help?” and “what outcome are you after?”, the staff at RNH can determine the best course of action for any situation.

“The approach here is very human to human,” RNH Executive Office Angie Davidson tells upstart. “It really depends on what the person at the window is saying they want.”

At the heart of the community organisation’s work lies their food relief program where offerings of free bread, produce, frozen meals and dry goods are made every week.

“It’s kind of an access point for us to find out more about a person, and then they’re more encouraged to connect with the rest of the community because their basic needs are being met,” Hatton says.

“You don’t need to have a reason, you can just walk in, pop yourself down and make a cup of tea and read a book,” she tells upstart.

And with a facility located in just about every district state-wide, most people’s homes are probably within walking distance of their closest neighbourhood house. According to Battle, members of the community take away multiple benefits.

“People will come into a neighbourhood house for one reason and usually walk away with [an average of] 2.3 benefits, so they’re lots of unintended consequences,” she says.

A number of neighbourhood houses also deliver various short courses and pre-accredited education options. These aim to progress the literacy and numeracy skills of disadvantaged people so that they can enter higher education or gain employment.

“Education is a really important way that people can improve their lives,” Battle says.

Neighbourhood houses receive essential funding from the Department of Families, Fairness and Housing which enables them to hire a coordinator. They may also receive some funding from their state and local governments, as well as the education system to run their timetable.

To help finance itself, Reservoir Neighbourhood House generates income through venue hire and sales made from their social enterprise café Birds&Beans. Staff also apply for grants and handle philanthropic donations as a registered charity to ensure all services and activities are offered at no cost to the individual attending a program.

As some smaller neighbourhood houses operate with only one staff member, the sector relies heavily on its 6,900 volunteers. Reservoir Neighbourhood House has a strong volunteer base, with residents exemplifying specialised skills encouraged to come and share them with the community.

“Some [volunteers] come in for specific things. Some are in every week. Others are daily,” Angie Davidson says. “We have 30 active [volunteers] and 20 hanging out for the phone call.”

“Houses get to know their people over a long period of time,” Battle says. For lonely or socially isolated people, “staff almost become sort of pseudo-family”.

So, if you or someone that you know is facing financial challenges, having difficulty with life or looking to connect, tell them to head into their local neighbourhood house.