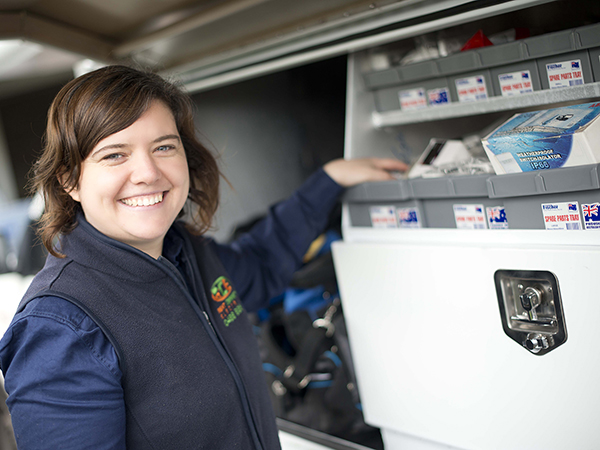 Females make up just 24.4 percent of Australia’s utility industry, but Sally Liddell’s company, Right Connection Electrical, is in the process of rewiring the system.

Liddell works in Melbourne, and says it’s not just good for the industry, but it’s a breath of fresh air for customers.

“A lot of people have said they prefer dealing with a female electrician,” she tells upstart.

“I often get comments about how nice it is to have someone who returns calls and turns up on time. A lot of people are just more comfortable inviting a female tradie into their home.”

Liddell’s long-term goal had always been to own a business, but after completing three years of a four year teaching degree and working various jobs in offices and call centres, she wanted to finally make it happen.

“I didn’t feel like I had found the right job or career for me,” she says.

“I wanted to do something that would challenge me and I had wanted to have my own business for a long time too so I decided to do a pre-apprenticeship in electrical and really enjoyed it.”

“I then managed to get an apprenticeship and became a qualified electrician, opening my own business in 2014.” 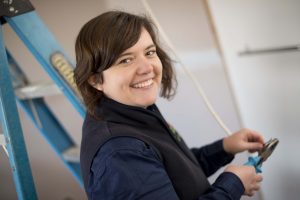 Two-and-a-half years down the track, she seeks to build on those foundations.

“My main aim when opening my business was to provide a friendly and professional service to people and to introduce more people to the idea that they can have a female tradie do the work they require,” she says.

She knows how hard it can be to break into the industry, particularly as a female, and wants the business to become a place where up-and-coming electricians can begin their careers.

“I am also wanting to build the business up to create a solid pathway for more apprentices to enter the trade as I know how hard it can be to get started,” she says.

Student Recruitment Manager at Melbourne Polytechnic, Adam Todorovski, says that although there is a small representation of women in electrical courses, there are big increases elsewhere.

“There has been a definite rise in numbers for our welding and wood-related trades,” he tells upstart.

“I believe it’s just the start, though, and that there will be a flow-on effect in other trade related industries [including electrical].”

In order to facilitate this growth, Todorovski says information needs to be delivered to females at an earlier age.

“I think there probably needs to be more information and decision-making support starting as far back as secondary school level for girls who are considering a trade,” he says.

“It can be quite daunting for a young woman to consider entering what are still very male-dominated industries, and from our perspective we are committed to supporting the women who do enrol with us.”

“Often they are among our highest achievers.”

For Liddell, every day at work is different and presents a new and exciting challenge.

“Some days I’m on multi-unit building sites with a blank canvas and other days I’m in peoples homes installing additional power points and lighting points,” she says.

She wants people to think differently, not just about her trade, but also about the concept of tradeswomen in other areas.

“I would like to think in some small way I am helping to overcome the stereotype and opening people up to a new way of thinking about tradies.”

Thomas Odell is a second year Bachelor of Journalism (Sport) student at La Trobe University. You can follow him on Twitter: @tomodell18.