The Olympics in Rio saw some unfair treatment of women and minorities by the media, writes Dominique McCusker. 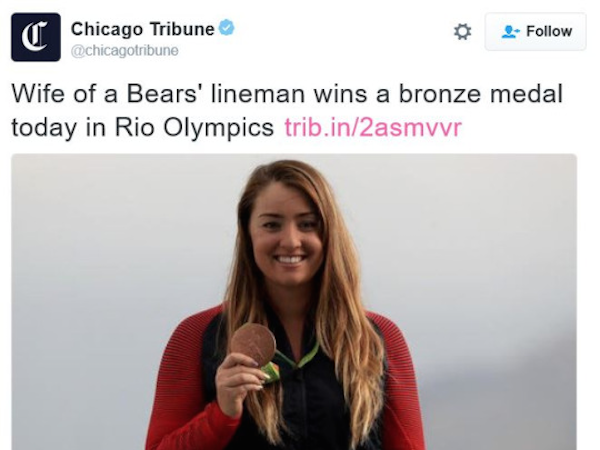 The Chicago Tribune found themselves in hot water on social media after posting this tweet.

Gold and glory aside, this year’s Olympics in Rio saw media outlets riddled with sexist headlines and other journalistic blunders.

One of the most notable examples was the coverage of gymnast Simone Biles, who in light of her incredible performances faced some sexist comments from the media, with one NBC commentator remarking that she “might even go higher than some of the men”. Biles promptly responded to said remarks in an interview by saying, “I’m not the next Usain Bolt or Michael Phelps. I’m the first Simone Biles.”

There was also the headline in which two-time bronze winner Corey Cogdell was not referred to as an Olympic medallist foremost, but rather as “Wife of a Bears’ Lineman”. Thirdly, when Katie Ledecky won gold and broke a world record, her headline was placed beneath that of Michael Phelps, who had tied for silver.

These incidents were fuel to the flame that has erupted on social media in recent times, adding to the broader discussion on how the media is treating women. 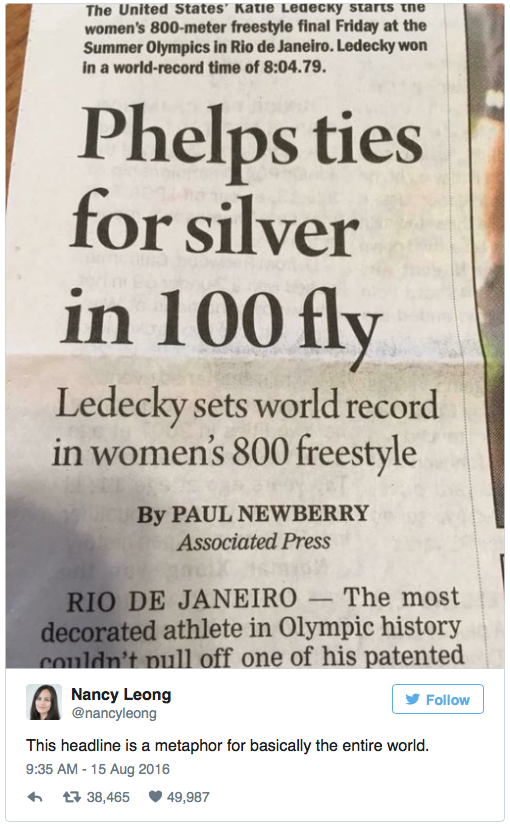 Brigid McCarthy is the Academic Coordinator for Mass Media and Communications at La Trobe Melbourne, and has her journalistic roots in sports reporting, founding the popular gymnastics blog The Couch Gymnast.

For McCarthy, issues about gender and representation started before the Olympics in a promotional ad package.

“For less than a second they showed a close up of the butt of a beach volleyball player … but it was basically a full arse shot,” she tells upstart.

“Are they trying to send us a subliminal message? Is that really necessary, that kind of scrutiny of the female body?”

McCarthy says that the media is not intentionally choosing to pay more attention to the coverage of male sports.

“I actually think it’s much more of a kind of embedded sexism. I don’t think it’s conscious, which I think is more frightening than overt sexism,” she says.

Though not a sexist scandal, one of the largest media blunders to happen during this year’s Olympics was an article published by Nico Hines to the Daily Beast.

Hines, a straight journalist, created an account on the gay social networking app Grindr, with the intention of baiting gay male athletes in the Olympic Village.

The article mentioned no names, but he listed his matches by sport and nationality, even noting that one of the athletes was, “from a notoriously homophobic country”.

“It still just stuns me that they let that go to press. Things like that must get by a few gatekeepers in the organisation.”

The Olympics is prime time television and guarantees headlines once every four years, but is not covered much in between. In addition, journalists’ interactions with the athletes follow a very strict regime, and contact time is very dependent on the publication journalists write for. This could be one of the reasons that certain less-than-ethical techniques have emerged during the Olympic rush.

Looking forward on how the media can represent minorities in a better and more equal light, McCarthy says the ball is now in the industry’s court.

“I think it’s now up to journalists to actually care enough to interrogate how they represent [people]. Being called out on that is a good thing.”