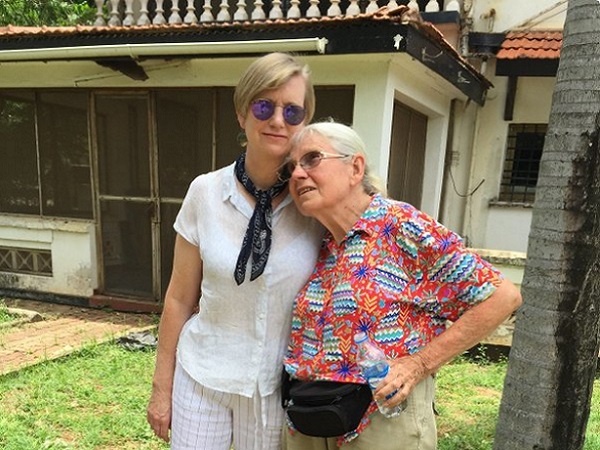 The Victorian Government has made the findings of the Royal Commission into Family Violence public today following the conclusion of a 13-month inquiry that sought to evaluate and improve the state’s response to domestic violence.

The report contains 227 recommendations, calling for improved co-ordination between community and government responses as well as new measures to improve prevention, early intervention, support and accountability.

The Victorian Government has committed to implementing all the recommendations of the royal commission, with Premier Daniel Andrews promising funding for key services in line with the findings.

“You can certainly expect there will be significant, indeed profound investments made by our government following the recommendations of the royal commission.”

“We will punish the perpetrators, listen to the survivors, and change the culture that allows family violence to happen in the first place. There can be no more excuses. Our work begins today to overhaul our broken family violence system from the bottom up.”

“That will come at a significant cost. This is not about saving money. This is about saving lives. Family violence is costing us at least $3.1bn dollars every single year. How do you put a price on a life lost?” Premier Andrews said.

It's time to change it all. #RCFVhttps://t.co/Y5ygYMkPTD

Amongst the reports recommendations is a proposal to establish 17 “safety hubs” across Victoria, which will act as a entry point for specialised family violence services.

“Privacy should not trump victims’ safety. So the commission recommends… the establishment of a central information point which will funnel information relevant to risk from police, courts, corrections and other services to the hubs to keep victims safe,” Ms Neave said.

The commission was established in February last year and heard from over 200 witnesses, including 2015 Australian of the year Rosie Batty, who lost her son to domestic violence in 2014.

Ms Batty, who was instrumental in establishing the commission, says she’s “thrilled” with the report, acknowledging the importance of pressuring the Federal Government for further reform.

Funding for the reforms will be added to the $10m boost to family violence services that the Premier announced last week alongside the establishment of a Family Violence steering committee to assist with implementing the commissions’ recommendations.

$6m of the funding has already been allocated to bolstering support services ahead of an expected increase in calls for help now that the commission has handed in its findings. 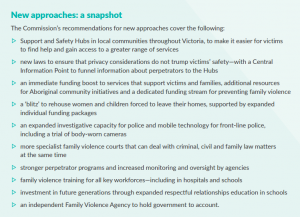 An excerpt from the full report.

The deliverance of the report comes the morning after Australia’s first Minister for the Prevention of Family Violence, Fiona Richardson, shared her personal experiences with family violence on Australian Story.

Ms Richardson was at times visibly emotional as she shared her story, remarking that “tears are a sign of weakness in politics,” but she has remained steadfast in her support for Family Violence reform and adamant about the importance of the royal commission.

“It doesn’t matter how nice your home is or how intelligent you are, abuse in the home can happen, it can happen to you and you are changed as a consequence of it,” Ms Richardson told the ABC.

“This report will change everything. We want to create a new system that helps prevent violence and give victims and survivors the support they need,” she said.

Ms Richardson has also criticised Victoria’s judicial system for its approach to dealing with matters of Family Violence, saying she was appalled to see a witness undergo cross-examination.

“I thank my lucky stars that the way in which the family court and family law is actually implemented in this country right now was not in place when my family dissolved and fell apart. Those systems are failing us, they are well past their used by date.

“This adversarial model, this putting women in a sense on trial as they’re trying to actually deal with some very challenging behaviours in their life, it’s the reason why you hear consistently from victims that the whole court process is a re-traumatising process,” Ms Richardson said.

Amid both the report going public and Ms Richardson sharing her story, three time premiership AFL player Jimmy Bartel has also shared his experiences with family violence, vowing to campaign for the cause.

“I am going to try and get people to start having conversations around domestic violence because I want people to change, and to start owning their behaviours and actions,” he told the Herald Sun.

To view the full report from the Royal Commission into Family Violence, click here.

Matthew Elmas is a final year journalism major at La Trobe University, he is also part of the UniPollWatch team. You can follow him on twitter: @mjelmas