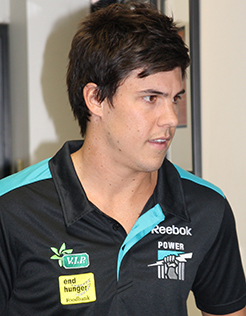 While free agency has had its critics and its fans, there’s one aspect of the policy that can’t be disputed: the astounding grey area of compensation picks.

The ruling currently in place sees clubs which lose players to free agency receive compensatory draft picks from the AFL to accommodate for their loss.

It all seems very easy to understand.  The problem is that it isn’t.

The initiative of allowing these compensatory draft picks was sensible at the conclusion of the 2010 and 2011 seasons when clubs were losing big-name players to the two expansion clubs.

For example, Geelong received a first-round pick for its Brownlow Medal winner Gary Ablett, who left for the Gold Coast. Meanwhile, Melbourne was reimbursed with a first-round selection for losing its number one draft pick Tom Scully to Greater Western Sydney.

However, now that the AFL has its two expansion clubs off the ground, there is simply no need for the compensation method to remain in place.

Last week, Port Adelaide defender Troy Chaplin completed a move to Richmond via the free agency policy. The move meant the Power received compensation, as per the AFL’s rulings, with the package believed to be a draft-pick early in the second-round.

But due to the confusing nature of the rule, that compensation package will be lessened to a lower draft pick, or perhaps even removed altogether, if the Power sign their own free agents.

The rule has since put Port Adelaide in a precarious position. For virtually the entirety of the season, the Power have had a long-standing interest in Essendon’s Angus Monfries and Carlton’s Jordan Russell, both free agents.

However due to the Power not wanting to lessen the compensation they received from Troy Chaplin departing, they were forced to work out a trade for Monfries, rather than sign him for nothing as a free agent.

Admittedly, Port Adelaide only gave up pick 48 for Monfries, a draft selection lower down the order than what would have been given up had they signed him as a free agent.

Yet still, it shows the gaping flaws in the AFL’s free agency rules.

In the case of Russell, it leaves the Carlton defender still without a home. Port Adelaide is frantically attempting to work out a trade with Carlton, rather than having to sign him as a free agent.

For Russell, who was born and raised in South Australia, his dream of moving home and playing football in Adelaide is on hold for the moment.

Player manager Marty Pask was extremely critical of the compensation rule when he spoke to the AFL’s Trade Radio late last night.

‘It has to go,’ Pask said.  ‘It goes against what free agency is. We then can’t say we’ll look after you around the back and support the football club. It’s almost against the spirit of free agency.’

‘These clubs that are waiting on their compensation picks, theoretically they’re not going to do anything for quite some time.

‘It’s creating a backlog of players that aren’t able to move.’

As per the AFL’s rules, all compensation packages relating to free agency moves won’t be determined until October 19th, the day that the free agency period closes.

This is due to the AFL wanting to ‘judge picks on a net gain and loss scale for each club’.

Even this ruling has created the same sort of backlog that Pask spoke about. It may have even damaged some club’s ability to trade for key players.

St Kilda recently lost its star utility Brendon Goddard to Essendon via free agency. As Goddard is an elite player, the Saints are of the belief they can expect a high first-round selection for their loss.

The rumour is that pick 13 will be given to St Kilda, however due to that not being confirmed, the Saints are unable to trade it with great confidence.

St Kilda recently went after Gold Coast midfielder Josh Caddy. The highly-rated youngster wanted to return to Victoria, and the Saints joined North Melbourne and Geelong in the hunt for the 20-year-old.

However as St Kilda’s compensation of pick 13 for Goddard wasn’t confirmed, the Gold Coast was understood to have been turned off the deal.

In theory, do you blame the Gold Coast management for not having confidence in this trade? How could they agree to give up one of their most promising youngsters for a draft pick with as much assurance as a lucky dip?

In the end, the Gold Coast traded Caddy to Geelong before the Saints even had the chance to offer up a confirmed draft pick.

Free agency within the AFL has the potential to work, whether you’re a fan of it or not. However in order to do so, the AFL must scrap the compensation if a club loses a player.

It’s a huge grey area within the new policy, and it must be cleared up and abolished before the commencement of the 2013 trade period.

Riley Beveridge is a first-year Bachelor of Sports Journalism student at La Trobe University. You can follow all of his up-to-date trade news at his Twitter account: @RileyBev.

This piece was originally published on From the Sideline.