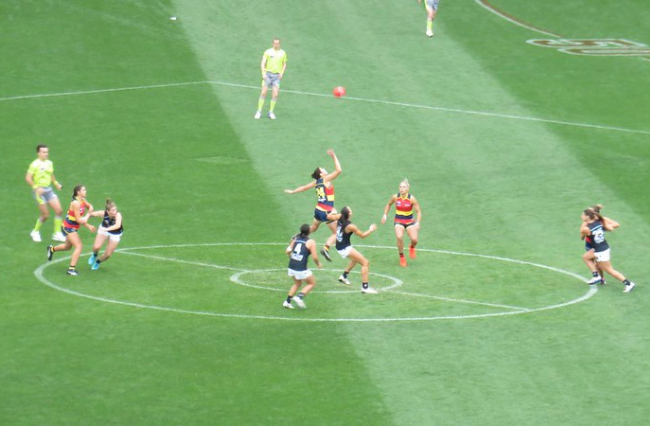 After almost four months of bruising and battering football, AFLW players will finally get the chance to relax now that the season has come to a close. The hard yards of fitness and conditioning training in the months prior were put to the test, with each player sacrificing plenty in pursuit of success.

The next few months would typically involve returning back to their normal routine, whether that is working as a paramedic or looking after their children. However, the script is about to be thrown out the window in 2022, with the AFLW set to announce a second season just four months after the first one has been completed.

The move to a winter competition has been long-awaited for many who feel as though playing football in summer is not sustainable, with the weather being too hot for both fans and players a major factor.

The announcement will also come with some logistical issues, and with two seasons in 12 months, the year 2022 is likely to take a large physical toll on many female footballers. For players in the VFLW who aren’t on an AFLW roster, the second season is going to pose some challenges.

Twenty-three-year-old Millie Klingbeil, a rising star in the VFLW, had a stellar season to date for Carlton. Like many others, she has her eyes firmly set on the upcoming draft night, where she may get an opportunity to ply her trade at the next level.

Klingbeil says there will be numerous aspects in her life that will have to move around in order to make her dream a reality.

“It’s really put a spanner in the works, especially if I get drafted [to an interstate club], because I’d have to work everything out in a one-month period,” Klingbeil tells upstart.

“It’s difficult because how much time am I willing to spend on something that doesn’t give me a whole lot of financial income?”

But she also knows she’d never be able to ignore the opportunity.

“Personally, I know that playing footy at the highest level is my dream, so I think I’d drop pretty well most things to be able to play at that level.”

Although the first 2022 AFLW season has finished, the VFLW season still has a long way to go, with the grand final being played no earlier than July.

It’s a tough prospect to play an entire season of football, where the player has to play well in order to be drafted, and then be asked to do it all over again until December, with a break of approximately four weeks.

Klingbeil is aware of the challenges that this year could bring, but the midfielder is confident that her body has the durability to last the distance.

“It is going to be a very full-on June, July, August period, but I think from a personal perspective if I was to get drafted, I’m feeling confident in my fitness that I could roll straight from [the VFLW] season to the AFLW,” she said.

The risk of injury will also be a factor for the draftees. According to the ABC, AFLW footballers are up to six times as likely to pick up an anterior cruciate ligament (ACL) injury than their male counterparts. In all likelihood, this discrepancy will only increase, as they are exposed to more football than ever before, therefore placing more stress on their knee ligaments.

Head of strength and conditioning at West Coast Eagles, Wes Salisbury, says that the club is heading into the unknown with how the players will cope with playing more than 20 games in one year, but he’s confident the procedures in place will ensure the players don’t burn out.

“I’ve been really impressed with the players’ durability and engagement with recovery processes through the first season and I think that’s able to build a consistency in training load for the girls,” Salisbury tells upstart.

“It’s absolutely a factor that we are going to have to consider, to say let’s not push, or to take a more conservative approach.”

Salisbury says that the West Coast players are of the mindset that while the upcoming season will be demanding, the long-term benefits make it worth the struggle.

“The overriding feeling is that this change is for the betterment of the game. Yes there are going to be extra sacrifices, but there is also the payoff…because there’s a longer break,” he says.

“Everyone is accepting of the fact that because it’s in the best interests of the game…everyone is on board and the energy around the club is really positive.”

The feeling among all people involved in AFLW seems to be one of excitement that this season is going ahead. Not only is the league moving away from the summer months, but this unique year is also a signal that women’s football is taking a giant step towards professionalism.

Photo: Opening bounce by Heather is available HERE and used under a creative commons licence. The photo has not been modified.

Ben Hann is a third year Bachelor of Media and Communications (Sports Journalism) student at La Trobe University. You can follow him on Twitter @BenHann6.