Sitting in the parliamentary press gallery in the House of Representatives, my eyes inadvertently wander over to the school children sitting in the public area.

It’s a little past two o’clock, and the opposition is again putting questions to Julia Gillard on the Australian Workers Union issue.

Many of the school children are resting their heads in their hands, with empty looks on their faces, as they watch the 150 members below engage in vicious attack and counter attack on a matter which refuses to go away.

The issue is that the prime minister, 17 years ago, gave legal advice to her then boyfriend and AWU official Bruce Wilson to set up an incorporated association that later had dodgy financial dealings. 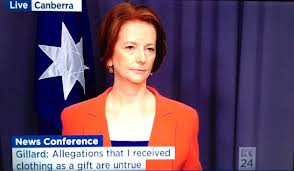 Julia Gillard holds a lengthy press conference to deal with the AWU issue.

Did she know about this?  If so, did she benefit from the so-called ‘slush fund’? Which document did she witness being signed?  Did she pay for her home renovations, or was the source of the money also a little dodgy? Why did she give legal advice to her boyfriend?  Why did that boyfriend allegedly deposit $5,000 in her bank account? What did she say in her exit interview from Slater and Gordon?

These questions are only a handful of the ones that have been put and re-put to Gillard from both journalists and the Coalition since 1995.

As I watch the school children sitting in the gallery, I notice one in particular: a young boy in the front who is watching proceedings carefully.  He squints his eyes so he can get a glimpse of the politicians he’s probably only ever seen on television.

Just as he begins to lose interest, a question put to the PM by the Deputy Opposition Leader Julie Bishop, is ruled out of order by Speaker Anna Burke.

And then the rage begins…if you still had the belief that it hadn’t already.

The Manager of Opposition Business rises to his feet to object the decision.  The Speaker reiterates her ruling.  The Opposition frontbench bellows in protest.  The Leader of the House rises to his feet to tell the Speaker she’s made the right decision.  He goes off on a tangent and begins hurling abuse at those opposite.  The Opposition frontbench turns red in the face from yelling.  Cries of ‘sit down’ and ‘you’re a disgrace’ float across the House.  More yelling and bickering continue from both sides of the Chamber.  In the end, that now infamous word is howled out by the Speaker: ‘Order!’

And then, that blissful moment: silence.

I look over to the little boy, and if the smirk on his face is any indication, he’s by now quite interested in the proceedings.

What could he possibly be thinking at this point in time?  That this behaviour, that the abuse and insults shouted across the chamber, that the finger pointing, the name-calling, the accusing, the double standards, is all part and parcel of holding some of the highest offices in the land?  That this behaviour is not only tolerated but what’s actually the norm in parliament?

Let’s assume for a moment that that’s indeed the young boy’s thoughts.  What evidence do we have to convince him otherwise?

I’m not suggesting that our nation’s parliament is never host to proper policy debates.

What I am suggesting is that in the lifespan of this hung parliament, despite all efforts to improve parliamentary conduct, things have actually gotten worse.

There’s one thing all sides of politics keep repeating.  And that’s the Australian public has had enough of what they consider to be the poor state of politics in this country.

Spot on.  And yet consistent with the perception of politics, it seems to be all talk and no action to change this.

In her lengthy press conference on Monday, Julia Gillard asked the press gallery to ‘show some leadership in standards’ when it came to doing their jobs.

Sage advice.  One that all those who enter the House ought to also take onboard.