Do universities really have zero tolerance for sexual assault on campuses? Cait Kelly finds out. 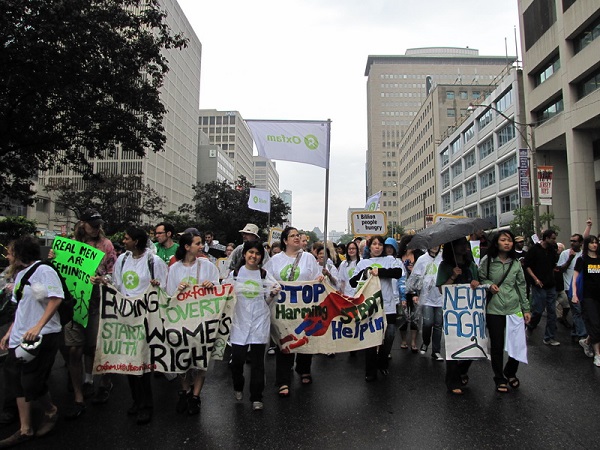 Photo by Oxfam International used under a creative commons license.

“Just go with it.” These were the words Rebecca King’s* friend whispered to her as her boyfriend watched on, before kissing her on the dance floor at a dingy pub in Dandenong.

They were all there to celebrate his birthday. The three were university friends, all promising students attending the Australian Catholic University in Melbourne, and King, who had just taken a semester off, had promised her friend she would come to keep her company.

“I presumed we were just going home, instead we started walking along and they were like oh we’re going to go back to another place and then the three of us are going to have a good time,” she tells upstart.

Despite her protests the couple coerced her into coming back with them, to ‘have some fun.’

“I was like thank you, but no thank you. I thought, I wasn’t going to be able to get out of this, I don’t know where I am. I said alright, if this is what you guys want that’s fine but I don’t want him touching me at all. I’m happy to kiss you Sarah* but I don’t want to go any further,” she says.

Under the guise of making it enjoyable for her, the couple then broke each rule King had laid out over the next hour.

“Because it was a surprise, no one was even wearing protection. Again I was like hey, I definitely don’t want to do this, oh okay we are doing it anyway,” she says.

“It was a long time before I realised that me saying no constantly was actually more than enough and I shouldn’t have had to say no more than once.”

In the following week, King went to the ACU councillor to talk about her assault, only to be told they couldn’t help.

Her experience is one that many Australian university students share. Academics and activists argue that a lack of reporting of sexual assaults, a prevalent rape culture on our national campuses and a lack of studies surrounding the sexual assault have all contributed to silencing a dialogue around the issue.

“According to the National Union of Students survey in 2015, 27 per cent of Australian university students had experienced some form of sexual assault while enrolled at their current university,” she told the crowd.

The NUS 2015 Talk About It survey states that 14% of respondents indicated that they had experienced rape and almost half (49.47%) said that this had occurred two to five times. When asked which gender the perpetrator was, 95% answered that they had been male.

In 2014, a plan for Australia’s top eight universities to collaborate on an in-depth review into sexual assault was quietly shelved. The National Union of Students currently collects the only university specific data surrounding this issue.

Heidi La Paglia, the NUS women’s officer believes this contributes to the inaction from universities.

“Enough is definitely not being done by universities. The reason the universities have often given is that there aren’t enough statistics,” La Paglia tells upstart.

“The only reports that have been provided about sexual assaults on university campuses specifically is the NUS one and that has allowed universities to largely ignore it because it is a survey produced by a student organisation.”

In February, Universities Australia launched ‘Respect. Now. Always.’ A collaborative program with every Australian university to raise awareness around sexual assault within institutions and apply best practices to combat these assaults. Part of the campaign will be a national survey launched later this year.

Former Army Chief Lieutenant General David Morrison, who lead the strong crackdown on sexual assault within the ADF in 2011 was also speaking at La Trobe’s panel.

“I think domestic violence is probably our greatest social issue,” he told the crowd.

“I’m going to offer relatively simple solutions to these complex problems. You will not make meaningful change here unless you care for the victims,” he says.

“Listen to their stories without judgment and with compassion and are able to take actions against alleged perpetrators.”

In the case where police find reasonable grounds to investigate an incident of sexual assault, Morrison called for the perpetrators immediate suspension.

“It is, in my view, unconscionable that a perpetrator even yet proven, would share the campus with an alleged victim,” he says.

In the instance that police decide there is not sufficient evidence to successfully prosecute, then the issue then becomes more difficult.

“There has to be some means by which a university deals with the issues, because not dealing with it leads to what was portrayed in The Hunting Ground and I think is in fact the status quo within far too many universities,” he says.

“There needs to be a means by which the victim is heard, the alleged perpetrator is also heard, and given the opportunity of course to establish the facts of the issue, this is not pre judging the issue, but the university needs to stand on one particular side of line.”

Henry also pointed out that universities were prime sites for sexual aggression as they were closed institutions where people lived, worked, and socialised.

She argued that the reasons behind the prevalence of sexual assault within our universities consisted of a lack of successful prosecution.

“In Australia, like most common law jurisdictions, reporting and prosecution rates for rape are incredibly low. For example, people who are sexually assaulted are the least of all victims to report the crime to police. Approximately 85% of victims do not report their assault,” she told the crowd.

Considering that many respondents to the NUS survey skipped the sexual assault question, the concern becomes that the number may be even higher.

Annalise Hartwig, a collaborator at Destroy the Joint, an online community dedicated to monitoring and eradicating sexism within Australian society believes that the problem goes deep into our understanding of who perpetuates these crimes.

“Culturally we still have this conception that sexual assaults are done by strange men in dark allies to young white girls. We don’t tend to acknowledge its being done by people’s friends on campuses, close acquaintances, teachers even,” she tells upstart.

“We are not acknowledging this is happening in our homes with people who are meant to be protecting us. I think it’s hard for people to accept that it is the average person who is perpetrating these crimes, especially on campuses.”

King never went back to ACU, picking up her studies years later at another institution. Her experience became another casualty in a culture that has, up until now, predominantly ignored this issue.

*Names have been changed to protect anonymity

If you have experienced sexual violence please call Casa House on 03 9635 3610 or contact the Victorian Police.