More and more parents are choosing to keep Santa out of Christmas celebrations. 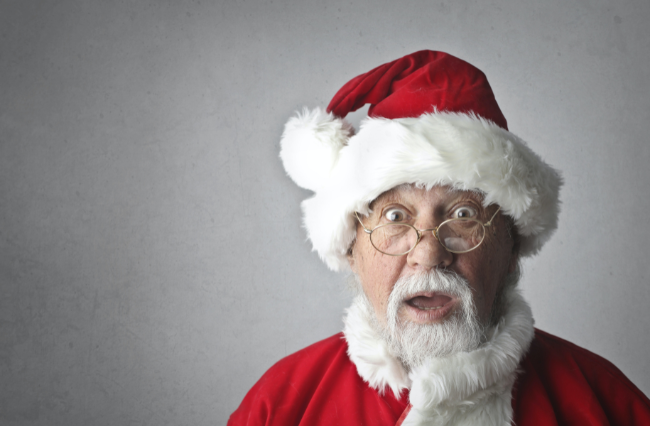 He sees you when you’re sleeping, and he knows when you’ve been bad or good.

For many, Santa’s an integral part of many kids’ holiday celebrations. Maybe you wrote letters to Santa as a kid, listing all the toys you wanted that year. Or maybe you left out milk and cookies for him, with a couple of carrots for Rudolf. You’ll take photos with him in shopping centres, and stay up all night on Christmas Eve just waiting for that glimpse of him leaving you presents under the tree.

And then, at some point in your childhood, you find out he isn’t real. The big lie. Some kids might figure it out at school, or find out on their own. Others are told by their parents. For some people, this is a defining moment, the moment when you find out that the people closest to you have been deceiving them for years. Rebecca English remembers this moment vividly, when her mother was helping out with a reading session at her primary school.

“Some kid made some comment about Santa not being real. I turned to my mother and I looked pleadingly and I said, ‘he is real’ to my mother, [and she said] ‘of course, he’s real’,” she tells upstart.

“So, she not only lied to me about the whole thing, she continued the lie, even when the door was open to going ‘well, actually no’ and then having that conversation.”

As both a parent to two and a specialist in alternative education methods at Queensland University of Technology, English has decided that for her young family, Santa Claus won’t play a role in their Christmas.

Aside from the lack of Santa, Christmas is still the same.

“We do presents, everything is normal… just [Santa] doesn’t get the credit for all the amazing presents that I spend my hard-earned on,” she says. “We just don’t say that Santa brought them stuff.”

For English, it is morally wrong to encourage your children with fictitious proof to believe in such a massive lie.

“We create this quite elaborate lie with them. And then we maintain this lie by concocting symptoms of him having been said to having been there. We create this whole series of evidence to suggest that he’s real,” she says.

More families are turning their backs on Saint Nick, to avoid those big lies. Many different parenting websites such as Saving Talents and advice columns such as Slate’s Care and Feeding have both answered parents’ concerns, offering advice on how to best tackle Christmas celebrations. The Conversation has also cautioned parents on why lying about Santa is bad to kids, and on TikTok, parents like Matthew Boudreaux share why they decide to keep Santa out of their Christmas celebrations, often with much disagreement.

While some parents are beginning to think more critically when it comes to what we tell our children, others still favour a traditional Christmas. Alethea Johnston, an early childhood educator and parent has raised her two now teenage boys to believe in Santa and has seen countless other families choose the same route. For her, it’s part of a tradition.

“I decided to raise my kids with Santa because I was,” she tells upstart. “I just followed through until they found out he wasn’t [real].”

Johnston also believes that an important part of Santa is the imagination and letting kids believe in magical things.

“Imagination in childhood is very important, and part of these fairy tale people like Santa that could be in your life creates a certain amount of magic that every child should have,” she says.

“I think all of that is the issue for me is… about creating this kind of imaginative space and this really beautiful kind of storytelling and narrative,” she says.

“All of the storytelling and all of the narrative comes from us, it doesn’t come from the child, the child doesn’t actually have a role.”

Santa or no Santa, English believes it is important to choose what is right and what works best for your family.

“I wouldn’t judge people who do choose to do Santa, I just think that there is maybe we need to think a little more deeply about what we’re doing when we do the Santa thing.”

Author: Georgia Tacey is a third-year Media and Communications (Journalism) student at La Trobe University. You can follow her at @georgiatacey.

Photo: Man in Santa Claus costume by Andrea Piacquadio available HERE and used under a Creative Commons license. This image has not been modified.