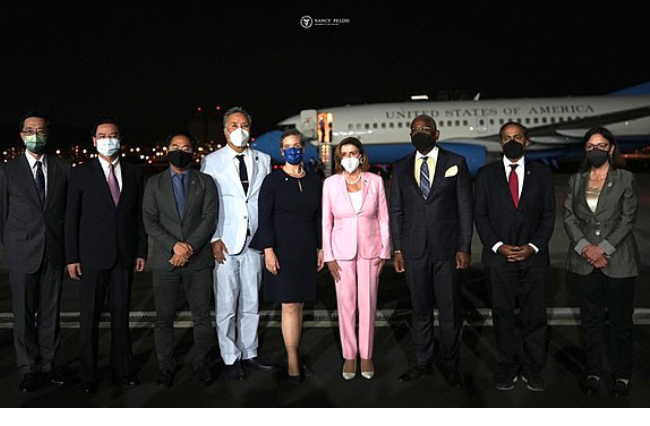 US House of Representatives Speaker Nancy Pelosi made her landmark arrival in Taiwan last night, on a trip that has triggered an angry response from China.

Pelosi’s arrival has sparked numerous threats by the Chinese President Xi Jinping, who warned President Biden of “those playing with fire will be burned”, according to The Daily Star.

Taiwan is a self-governing island which China lays claims to. Washington does not officially recognise Taiwan as an independent state, but is still required by US law to provide its government with the means to defend itself.

Pelosi has become the first US official to visit the island in 25 years. In a statement Tuesday she said that the visit “honours America’s unwavering commitment to supporting Taiwan’s vibrant democracy.”

Our visit reiterates that America stands with Taiwan: a robust, vibrant democracy and our important partner in the Indo-Pacific. pic.twitter.com/2sSRJXN6ST

After arriving in Taiwan, Pelosi was greeted by Taiwan’s foreign minister Joseph Wu, and Sandra Oudkirk, who is the top US representative in Taiwan.

Biden’s administration acknowledged that the US military felt it was “not a good time right now” considering tensions boiling between the two superpowers.

China has since responded by condemning Pelosi’s visit, the foreign minister saying it severely damages peace and stability in the Taiwan Strait.

In a statement China says the visit “has a severe impact on the political foundation of China-U.S. relations, and seriously infringes upon China’s sovereignty and territorial integrity”.

Australia’s Foreign Affairs Minister, Penny Wong, has called for a calm between the two nations after the US Speaker of the House touched down on the island.

“All parties should consider how they best contribute to de-escalating the current tensions, and we all want peace and stability in the Taiwan Strait,” she said in a statement to ABC AM.

Photo: Nancy Pelosi at Taipei Songshan Airport by Office of U.S. House Speaker available HERE is used under a Creative Commons Attribution. The image has not been modified.