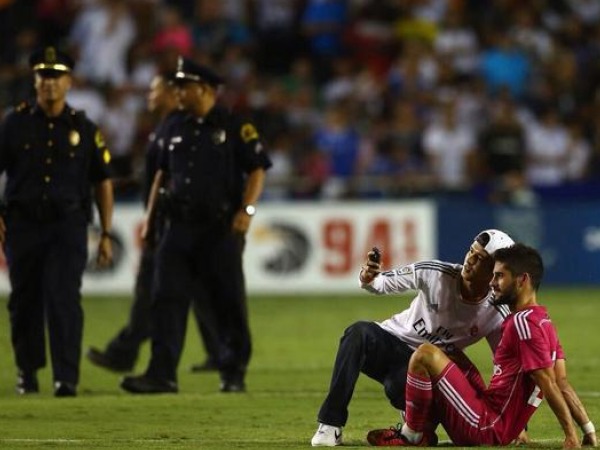 Clearly uncomfortable and slightly annoyed, Spanish footballer Isco, was almost forcibly made to take a ‘selfie’ with a young fan late last month.

The Real Madrid star has undoubtedly been snapped in this manner countless times before, but on this occasion his admirer was in the process of breaking the law. He was on the ground; he was a pitch invader.

The intruder was rounded up by security, along with approximately 20 others, and escorted from the field.

In this instance, apart from halting play momentarily, there were no consequences. A.S. Roma and Real Madrid played out the final minutes of their International Champions Cup friendly in Dallas, without any further interruption.

The pitch invader got his 15-seconds of fame and was in all likelihood more than happy to pay the exuberant fine; a relatively small price given the amount of social media likes it would garner. No harm done, right?

For pop culture stragglers, a ‘selfie’ involves the use of an internal phone camera to capture a photo of yourself, and possibly others, in the foreground.

Although the practice has been around for years – made possible with the technological advances of smart phones – the selfie’s popularity boomed when Oscars host Ellen DeGeneres snapped herself with a dozen of Hollywood’s biggest names at this year’s ceremony.

Since then, the world has become ‘selfie’ crazed, with the trend now beginning to engulf the sporting world. Indeed, even the AFL indulged in the hype in the lead up to the 2014 season, clamouring all 18 team captains into frame to say cheese. A cringeworthy effort that must have had each participant thinking they’d actually said ‘cheesy’.

Contextually, the AFL’s foray into this fad sits on the lighter side of the spectrum, however, we’ve seen how this cultural trend can cause havoc when spectators get too close to the action.

American rider Tejay van Garderen summed up the general mood of many of his colleagues who were forced to endure what he described on Twitter as, “a dangerous mix of vanity and stupity”.

“Standing i[n] the middle of the road with your back turned while 200 cyclists come at you, just to take a selfie. #think #TDF2014,” van Garderen tweeted.

Vincenzo Nibali, the eventual winner of this year’s general classification title, was almost thrown from his bike. In fairness to the offender she wasn’t in the act of taking a ‘selfie’. No less, she did exhibit a few of the telltale sport ‘selfie’ signs, using her mobile phone with her back turned to on-coming traffic.

Tour de France riders hitting the tarmac due to the actions of spectators is hardly a first, but do we need another reason for people to creep closer to the road?

The ‘selfie’ is fast becoming an excuse for onlookers to intrude on sportsmen and women in their place of work. Once spectators involve themselves in the action, they cease to be spectators – they instantaneously transform into a nuisance.

People need to understand the price of admission does not include a ‘selfie’ with the athletes.

Fortunately for stars at this year’s Glasgow Commonwealth Games, nobody was subjected to a mid-competition ‘selfie’ request. Nevertheless the practice did become a sideshow, if not highlight of the Games, no matter which Royal was ‘photobombing’.

After helping Jamaica to gold in the 4×100 relay, the world’s fastest man, Usain Bolt, went on one of the world’s slowest victory laps – obliging to almost every patron who asked for a photo.

Largely in Glasgow in an ambassadorial role, Bolt took it in his stride. But he did mention the time-consuming nature of the process.

“This new thing about selfies is really making these laps of honours really long,” he said.

“It used to be autographs, now everyone wants a selfie.”

This is not the problem; it’s fantastic to see willing sports stars better engage with those they routinely dazzle. It only becomes an issue when fans mistake contact with athletes as a right, not a privilege.

As soon as spectators enter the arena, they cross the line – literally. If a picture is worth a thousand words, then the uneasy look of Isco surely says it all.

Callum Godde is a third-year Bachelor of Journalism (sport) student at La Trobe University. You can follow him on Twitter: @calgodde