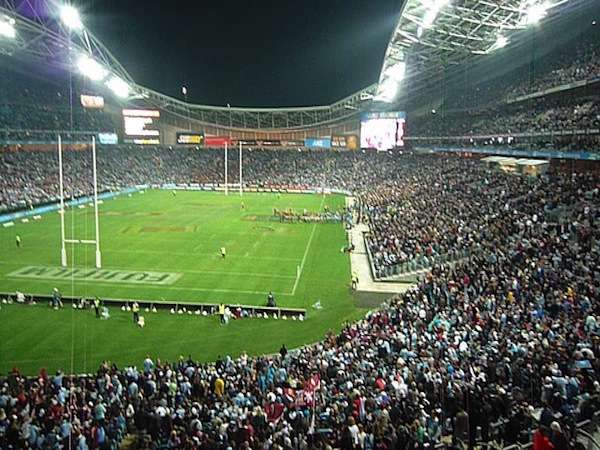 If you are reading this, then you are clearly a casual fan of rugby league.

Much like horse racing fans in springtime, you probably watch rugby league twice a year and think this is sufficient to class you as an expert. However, being found out as a fraud at the pub during State of Origin can be an embarrassing event!

This guide will arm you with enough information to breeze through the toughest grilling a true rugby league fan could give you during an -assumedly Tom Waterhouse sponsored – commercial break.

The series itself began officially in 1982, although the rivalry that it’s based upon can be traced back as far as 1908. To date, Queensland leads New South Wales in series wins 18-12, and match wins 51-43. The Maroons have dominated in recent years, winning seven consecutive series.

State of Origin rules tend to be slightly different to what is found elsewhere in Australian sport.

The tackle zone is somewhere between the forehead and the toes. There is no “hands in the back”, “holding the ball” or any such rules, instead allowing players to commit acts commonly known on the street as assault.

And while fights are technically frowned upon, little is ever done to stop them from occurring and suspensions are rare.

State of Origin is where legends are made, and it’s important to be able to reference a few in your banter. You do not need to know what acts of heroics granted them such status, just who they are and the colour of their jersey.

Assume they made a few game winning plays, and may have been involved in an on-field decapitations or two.

More importantly, what should you drink while watching the game?

Queenslanders – and those pretending to be Queenslanders – drink XXXX. Rumours whisper it was named thusly because they cannot actually spell beer. However, the aforementioned is malicious falsehood started south of the border.

New South Welshmen drink Tooheys or Carlton Draught because they are “working-class beers.” And, as we all know, Sydney is so working-class.

If the establishment of choice does not supply these beverages, then all other beers must be declared “weasel piss,” and a scene must be created. Declaring everything is heaps better in QLD/NSW while viewing the game in another state is also essential.

It’s vital to be as irritating as possible while watching the game; polite golf applause won’t cut it here. Instead, alcohol-fuelled, Sharapova-level screaming is required, and much of it must be directed at the referee (not umpire).

With this in mind, any decision against the supported team must never be agreed with. In all cases, no matter how blatant the penalty, the verdict must be met with enraged booing and perhaps the highly specific insult: “Grow a fringe!” This was over heard at a Bulldogs game and was met by the nodding approval of the surrounding supporters.

It is assumed to be a disparaging comment, as those without fringes are not suitable for the rigours of refereeing.  Obviously their lack of folic growth affects their decision making, sight and general ability to follow left foot with right.

If the supported team should lose, all officials must be blamed for the result. Newspaper spreads of each officiating error the supported team endured must be highlighted, while ignoring those suffered by the opposition. The consensus that the officiating was of a generally poor standard must be ignored, instead opting to promote some over-arching conspiracy.

Once this has died down, a feverish campaign demanding the coach to be sacked must immediately start. When all else fails, blame the guy that missed the game winning field goal from 40 metres out while under pressure. Those three seconds of play is always the reason the team lost, not the other 79 minutes and 57 seconds of tripe his surrounding teammates produced.

If you are supporting Queensland, reminisce of times spent on Caxton Street – with this one street in Ipswich explaining a lot about the atmosphere surrounding State of Origin. Queensland Police banned the NSW bus from its traditional journey through the town for fear of both the public and the team’s safety.

If your team of choice is New South Wales then regale with stories of big nights out at Kings Cross or the eastern suburbs. A misspent youth at the Golden Sheaf, or witnessing a fight at Ivy will gain instant acceptance.

You can now officially consider yourself “Origin ready.” However, if the above outlined didn’t suffice, don’t despair. There’s probably an AFL replay on Foxtel somewhere…