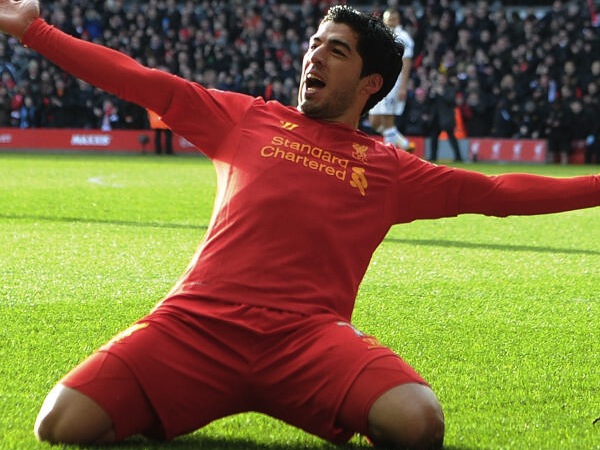 Luis Suarez has produced some of the most stunning goals in recent English Premier League (EPL) campaigns, but his brilliance is often overshadowed by his tendency to find trouble.

The Uruguayan was charged with violent conduct after footage of Liverpool’s clash with Chelsea on Monday showed him biting defender Branislav Ivanovic on the arm during a tussle in the box.

The incident adds to a long list of disciplinary infringements, and despite being one of the best strikers in the world, his position at Liverpool may be under threat.

It’s not the first time Suarez has committed the inexcusable act of biting on an opposing player. In 2010, he received a seven-match ban for sinking his teeth into PSV Eindhoven midfielder Otman Bakkal.

That suspension isn’t the harshest punishment he has copped either. Late in 2011, the frontman was found guilty of racially abusing Manchester United’s Patrice Evra and was slapped with an eight-match ban and a £40,000 fine.

While he was backed by Liverpool in denying his guilt in that controversy, he has handled this latest charge with genuine remorse in an effort to uphold the club’s standards and repair his reputation.

Suarez treads a fine line. There is no doubting his world-class talent, sitting atop the 2012/13 Premier League golden boot tally with 23 league goals. However, a certain amount of bad press can sometimes force a club to move on.

Liverpool’s performances in recent years has been substandard in relation to expectations. Currently in seventh position on the Premier League table with four matches remaining this season, another year without Champions League qualification is highly likely, while Manchester United claimed the 2012/13 title against Aston Villa yesterday.

It is difficult to imagine Liverpool releasing Suarez, given that its hopes of attracting an equally influential player are made more difficult based on results. However, manager Brendan Rogers hinted post-match that identifying and snaring elite talent wouldn’t be an issue, referring to the club’s history of champion players.

“If you ever lost a player you think you can’t replace him then the next one comes,” Rodgers said.

The uncertainty surrounding Suarez’s future at Anfield has also been exacerbated by criticism from many people outside the club, including ex-players.

Reality bites: why Liverpool should sell Luis Suarez (and not just for his latest indiscretion) http://t.co/7nLyizFsdV #lfc

Liverpool legend Graeme Souness said the incident has brought Suarez dangerously close to ending his career at the club.

“This puts him in a last chance [situation] to learn as a Liverpool player,” Souness said.

Jamie Redknapp was one to acknowledge the value of Suarez’s good form, but also stressed it does not transcend his lack of discipline.

“What he did today was indefensible,” Redknapp said.

Despite the terrible press, Liverpool Managing Director Ian Ayre expressed faith in Suarez and has given no indication of his time at Anfield coming to an end.

“We’ve taken action to fine Luis for his actions. Brendan has spoken to him, I’ve spoken to him, and Brendan will be working further with him on his discipline,”Ayre said.

“You can see when you speak to him how sorry he is about it, and he’s shown quite a lot of contrition to us.”

To let Suarez go could prove disastrous for Liverpool. His 23 goals this season put him 14 ahead of his next best teammate Steven Gerrard.

If the Reds can’t finish above sixth at the end of this season, it will be the fourth year running that they have failed to do so. For some clubs such a record is a non-issue, but Liverpool has never been a club that settles for mediocrity. Before the recent downturn in form, the Reds’ worst EPL finish was fourth.

For a massive club like Liverpool, who boast a strong history and a fan-base that demands success, losing Suarez would do more harm than good. Replacing such a prolific goal-scorer is a hard task for a team struggling for greater consistency, and the Merseysiders would, in all likelihood, drop further down the table without Suarez leading the attacking line.

Grinding through the bad press and putting an end to self-inflicted and unwanted distractions should be the main focus for Liverpool and its enigmatic star going forward.