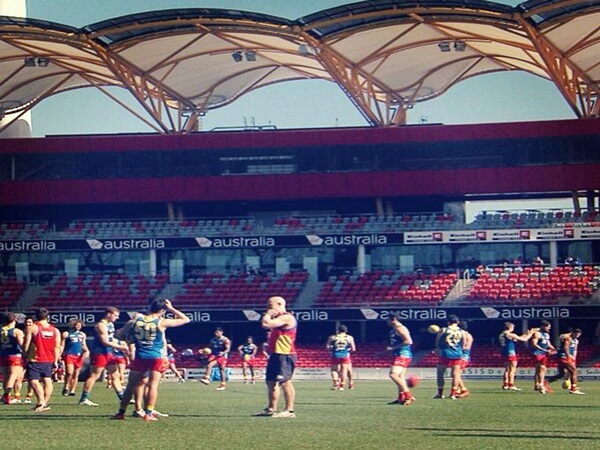 Cast your mind back to round 16 of the 2012 AFL season. The Gold Coast Suns are trailing Richmond by 16-points with just under four-minutes remaining. It looks inevitable that the Tigers will add more grief to the Suns’ season and hand them their 23rd consecutive loss.

However, a late comeback saw Karmichael Hunt kick an inspirational goal after the siren to pull off a fairytale victory for the Suns. The win gave the Gold Coast players a real sense of self-belief, as the young side then went on to comfortably defeat GWS, before ruining Carlton’s finals hopes in a surprise win at Metricon Stadium.

The Suns have been able to carry their promising form from the closing few rounds of last year into the 2013 season. This has made them one of the most improved sides in the competition.

Gold Coast’s transition into the AFL was always going to be an arduous experience for the young team. With three wins in each of its first two seasons, coach Guy McKenna’s aim for 2013 was to achieve at least six wins.

Although it seemed like an ambitious goal at the start of the season, the Suns have made a significant improvement, and many pundits would no longer class them as an ‘easy beat’.

McKenna’s side made a statement to the competition in the very first round, defying all odds to defeat St Kilda on the back of some individual brilliance from captain Gary Ablett.

Gold Coast has been consistent in most games this season, challenging and staying with many of the top teams for much longer than many would expect. A fine example of this was against Hawthorn in round 9, where many were expecting a comprehensive win to the ladder leaders.

But to the surprise of many, it matched it with the Hawks in almost every area of play for the first-half, and took an 11-point lead into the main break. The class and experience of Hawthorn proved to be the difference in the end, but this was a game where the football public started to take notice of the Suns’ dramatic improvement.

Their average losing margin has dropped from 53-points last season to just over five goals this year. The Suns have had only one defeat over 50-points in 2013, which came against the Cats in round 11, after the scores were all tied up at three-quarter time.

The Suns ended their season with a morale boosting 83-point win over the other expansion club Greater Western Sydney yesterday, to finish in 14th position on the ladder.

Several of its foundation players are in their third season and are starting to play with a great deal of poise and assertiveness. Trent McKenzie and David Swallow have been strong off the half-back line, while Rory Thompson and Steven May are maturing as key defenders.

Harley Bennell and Dion Prestia are living up to their high expectations as first-round draft picks, and have really stepped up in the games where Ablett’s influence has been nullified.

Another of the Gold Coast’s young guns is Jeager O’Meara. Few have entered the AFL scene in the same manner as O’Meara and his remarkable debut season will most likely see him win this year’s Norwich Rising Star Award.

Gold Coast are establishing an extremely potent midfield, with Ablett, Bennell, O’Meara, Prestia, Jarrod Harbrow, Matt Shaw and Danny Stanley. Jack Martin, who was selected at pick number one in the 2012 Mini-Draft, also adds to the Suns midfield depth. The upcoming player has plenty of explosive power and draws plenty of comparisons to Hawthorn’s Cyril Rioli.

Also impressing this season was Aaron Hall with his run and dash through the forward half. He is a vital part of the club’s future and could easily become one of the best medium-sized forwards in the game.

Its forward line has enormous potential, though the likes of Sam Day, Charlie Dixon and Tom Lynch must all register more goals next season if Gold Coast wants to continue to improve as a side.

Tom Nicholls has been rucking superbly in the last few rounds and he will form a very formidable ruck combination with Zac Smith in the seasons to come.

The talent on the Suns list is tremendous and they will take a great deal of confidence out of their two upset wins over North Melbourne and Collingwood.

The exciting playing group have exceeded McKenna’s goal of six wins, and with another full pre-season under the belt, expect the Suns to rise much higher next season and push for finals football in 2014.

To all of our Adelaide members and fans, please join us at AAMI Stadium this afternoon from 3:45 for open training. pic.twitter.com/ESdGv3VZb4