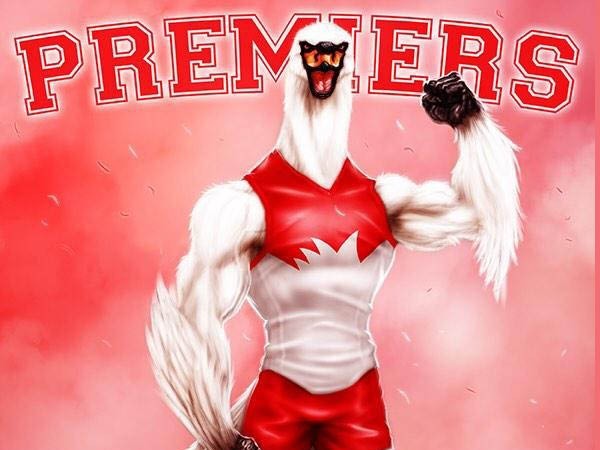 Sitting at 1-3 after an opening month that included losses to GWS and Collingwood, it was easy to think the Sydney Swans were a premiership pretender.

But since then, Sydney has been almost unstoppable. Their past twenty games have produced 18 wins at a remarkable percentage of 160.14, building a solid foundation for the club’s sixth premiership.

Crocmedia and SEN’s Darren Parkin tells upstart the Swans’ form is something to revere.

“If you look at their form, they’ve lost two games since round 4,” says Parkin. “Both of those games were by 10 points or less. Their finals series has been dominant.”

“They controlled Fremantle even though there were some difficult moments in that match. They dominated the game against the Kangaroos and looked fantastic.”

Earlier in the season, Lance Franklin’s form in contests was flaky and he failed to return on his huge salary. However, the former Hawk is now delivering value in spades.

Since round 17, he has won more than half of his one-on-one marking contests, including taking marks 47 per cent of the time, more than triple the league-average. When Franklin kicks more than three goals, Sydney wins.

Parkin says the forward line led by Franklin has well and truly hit its straps.

“[Last week] Kurt Tippett, Adam Goodes and Lance Franklin kicked twelve goals between them. Buddy took 12 marks, 23 possessions. He is probably in the form of the season.”

“Kurt Tippett has played eight games in a row and that’s good continuation for him. I think Goodes played his best match for the year. Sam Reid, whilst he got injured, I think he will come up. Ben McGlynn (18 games, 23 goals) is a really important player,” says Parkin.

Unlike Hawthorn, who has seen injuries and match-ups force constant changes to the line-up, Sydney has enjoyed an unchanged line-up throughout the finals.

“Their midfield is a little more settled,” says Parkin. “We know (Jordan) Lewis is a little bit sore and Hawthorn is debating what they do in the ruck. Sydney is the best team in the competition this year, [and] they’ve beaten Hawthorn this year.”

In their last match against Hawthorn, they narrowly lost. but Parkin says the Swans’ were up against it from the start given they were without Hannebery or half-back Rhyce Shaw.

“Hannebery is their most important midfielder behind Kennedy, and Shaw provides that run.”

“They are valuable assets,” says Parkin.

“I know it isn’t as simple as this but since they played Hawthorn two years ago in a grand final, Hawthorn has lost Franklin and Rioli is injured, and Franklin now plays for Sydney.”

“That should tip the ledger their way but time will tell.”

Who to tag poses the biggest question for the Sydney line-up.

“Inside players, like Mitchell and Josh Kennedy, are particularly hard to tag because they find their own ball anyway,” says Parkin.

“Luke Hodge is a big game finals player who needs some attention. I’d be more inclined to tag Lewis of the three of them because you’d think he’s more ‘gettable’ and has been their best player over the course of the season.”

Here is my #SydneySwans premiers print. I hope you Bloods fans like it! #AFLGrandFinal #AFLSwansHawks #AFL pic.twitter.com/a76TBfLcWa

Sydney’s defenders can easily avoid the limelight thanks to the stars further up the ground, but Hawthorn’s forwards will be silly to drop their guard.

Sydney has restricted their opposition to 67.6 points per game this season, better than any team since 2009.

Half of the eight players to play every game for Sydney this season are defenders (Ted Richards, Heath Grundy, Nick Malceski, Dane Rampe). Key defenders Richards and Grundy have spent just 1.4 per cent and 2.4 per cent respectively, off the ground all season.

“When people look at Sydney, they think elite midfield, elite forward line and a very good defence that might be ‘gettable’. I’m not sure that’s the case,” says Parkin.

“Malceski with his run is one of the best in the competition. Richards and Grundy are as good a combination as you can find.”

With Richards and Grundy expected to have even contests with Jarryd Roughead and Matt Spanger, the lesser match-ups will have increased significance.

Parkin expects Dane Rampe to go to Jack Gunston while Nick Smith will have his pick of Cyril Rioli and Luke Bruest.

“[Rampe] is very under regarded. He’s played every game last year as a breakout and has done very similarly this season,” says Parkin.

“Even Nick Smith, who beat Rioli and was one of the major reasons they won the flag two years ago, is still under regarded.”

The Swans’ are well rested from five weeks without interstate travel. While the game is played on Hawthorn’s turf, the fine weather forecast for Saturday will play into the hands of Sydney’s taller team.

The game has been billed as Lance Franklin versus his old team but Jordan Lewis yesterday warned fans against booing their former star, in case it sparks up the Coleman medallist. Parkin says he sympathises with Hawthorn supporters.

“It’s hard to hold huge grudges against him but he has gone to a premiership rival. That hurts.”

“If he played in a premiership against them, it would be a pretty bitter pill to swallow.”

Yesterday, Darren and Luke looked at Hawthorn’s chances for the flag.

Limited edition print will be available if Sydney win.