The decree comes after Afghan women protested their rights against the all-male interim government. 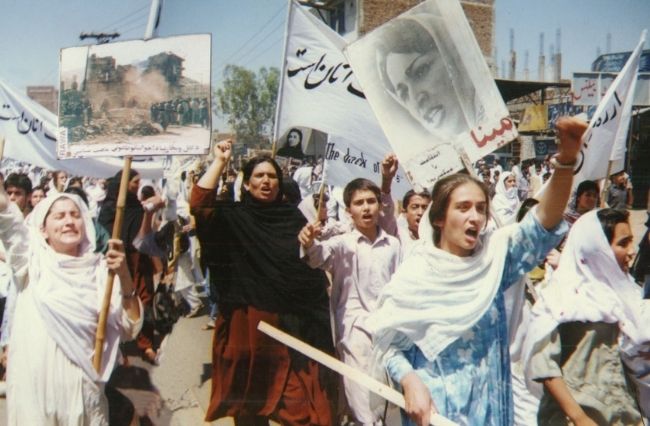 Following the escalating protests in Kabul, the Taliban has imposed a ban on demonstrations. They announced that protests or slogans will need to be officially approved beforehand from the justice and interior ministry.

According to the Taliban’s new interior ministry’s statement, anyone organising a protest should ask for clearance 24 hours ahead to avoid disturbances and security problems. Slogans and the planned theme of the protest must be shared with ministry in advance, it adds.

Sirajuddin Haqqani, the new interior minister, is on the FBI’s most wanted list for his role in a terror attack network that killed many people and kidnappings in Afghanistan. The interior ministry further stated that those who protest without approval will bear the repercussions on their own.

Wednesday’s formal ban comes after days of violent and sometimes lethal confrontations between Taliban fighters and Afghan women who have repeatedly taken the streets of Kabul attempting to roll back their rights.

After the announcement of the new cabinet, a group of women protested in the city’s Pul-e-Surkh area. Small demonstrations have persisted despite several large protests being violently dispersed.

The Taliban has already ordered women to stay at home “temporarily”, enforced segregated classes in Afghan universities and announced an all-male interim government.

“The cabinet was announced and there were no women in the cabinet. And some journalists who came to cover the protest were all arrested and taken to the police station,” said a woman in a video shared on social media.

Deputy Afghan representative for UN Women’s agency, Alison Davidian, says they are receiving significant reports on the “rollbacks of women’s rights” in Afghanistan.

“The lack of clarity of the Taliban’s position on women’s rights has generated incredible fear — and this fear is palpable across the country,”she told the ABC.

Davidian said that the situation for women ranged by province and urged the Taliban “to show that it governs for all Afghans and that it has changed” and that it would protect and promote “the full spectrum of women’s rights”.

Photo: Demonstration of the Revolutionary Association of the Women of Afghanistan (RAWA) in Peshawar, Pakistan to condemn the 6th black anniversary of swarming of fundamentalists into Kabul, April 28,1998 by RAWA available HERE and used under a Creative Commons Attribution. The image has not been modified.