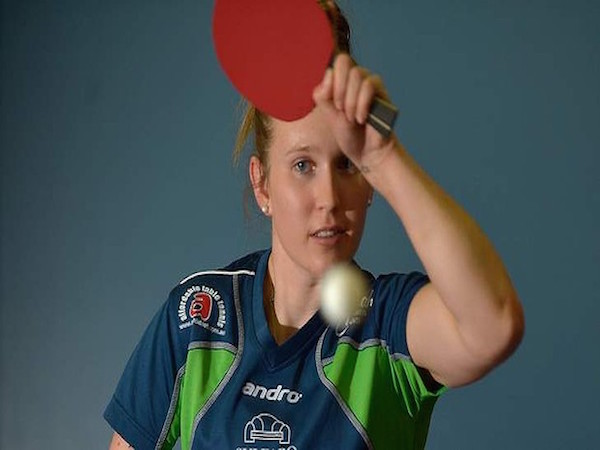 As the countdown to Rio 2016 begins, many athletes are deep into preparation for the largest multi-sport event in the world.

The 25-year-old table tennis champion will likely be the first Australian to compete in both the Olympics and Paralympics.

After narrowly missing out on a podium finish at the 2012 London Paralympics, Tapper’s Rio Paralympic medal target is firmly set on gold.

The Olympics will act as a stepping-stone for the Paralympics.

“I’ll get a first hand look at the hall, the accommodation and the travel that has to be done, before all my competitors have the opportunity,” she tells upstart.

“I see that as a very big bonus for me if I were to qualify for the Olympics.”

Tapper has Erbs palsy, a nerve condition acquired at birth that damaged the nerves in her right shoulder, meaning her right arm is significantly smaller and weaker than her left.

“From my shoulder downwards to my arm, I don’t have the strength, muscle definition or size that I do of my left. I guess the imbalance is where I notice it most,” she says.

Her desire to be involved in sport, however, has always offset any physical barriers.

Since first picking up a table tennis bat in primary school at the age of 12, Tapper hasn’t looked back.

She won her first national championship when she was 13, and then went on to win six junior titles.

Originally from Hamilton in Victoria, Tapper moved to Melbourne when she was 16 to be closer to the city for competition.

She was hesitant to accept the offer to join the Australian para-table tennis squad as a teenager. She says she didn’t understand the reasoning behind all of the encouragement.

“I was always told I was the same as every one else. I was winning all through juniors anyway, so I didn’t understand what else was out there,” she says.

As Tapper matured, so did her mindset. After being approached a second time, at age 19, she agreed to give para-table tennis competitions a go.

“It’s one of the best decisions I’ve ever made,” she says.

The year she finished studying a Bachelor of Health Science at university was the beginning of her Paralympic career.

She has since won tournaments in Hungary, Italy, Australia and England.

While her right arm is considered a disadvantage, Tapper says she’s never known any different.

“I’ve only known how my body feels. I don’t know how it should feel,” she says.

Currently ranked third in Australia, there is no doubt that Tapper, who is trained by Olympian and husband Simon Gerada, can match it with the best in the world.

Tapper’s biggest struggle had always been her serve. However, she now has one of the best serves in the game thanks to all of the time and effort she’s put into getting it right.

“I put so much time into it, because I knew it was the worst part of my game, and if it didn’t improve I was going to be in trouble. I’ve found a way that works really well and is just as good as every other female way of serving,” she says.

“The fact that I’ve put so many hours into it, meant that I really began to serve, create spin and placement and that sort of helped me in terms of getting ahead.”

Tapper says she tries to find any extra “one per centers” to improve her game.

Her current focus is to develop more power and strength. She typically attends four gym sessions a week, in addition to her on-court training.

Tapper qualified for a spot in the 2016 Paralympics in April this year, which will be confirmed early next year. The first stage of Olympic qualification starts in February and Tapper believes she’s in with a chance.

“I back myself, I think champions always have to back themselves. I know it’s going to be tough though,” she says.

As part of the lead-up to Rio 2016, Tapper is writing blog entries on the 2016 Australian Olympic website, giving an insight into her preparations.

Although many admire Tapper’s friendliness, national coaches and selectors told her that if she wanted to demonstrate a competitive edge, the smiling on-court would have to stop.

Tapper had to change her off-court bubbly demeanor to a grittier on-court persona.

“My way of dealing with things was to smile, but once I’m on court now, there’s no smiling happening.”

An exception to this rule will be if Tapper makes the Olympic-Paralympic double, or wins the coveted Paralympic gold medal.

The upstart sports section and multimedia team are profiling professional athletes from sports not typically covered in the media, in our new section, The Other Sports. Throughout this segment we are hoping to convey the life, struggles and dedication of modern day professional athletes. We also aim to give readers an introduction to these sports.