Former England international player Sol Campbell’s suggestion that English supporters should ‘stay at home’ for EURO 2012 was not an attempt to save the fans the agony and heartbreak of yet another potentially disappointing tournament.

Rather, it was a warning about the very real possibility of violent, racially motivated attacks by extremist groups within the host nations, Poland and Ukraine, during the upcoming European Nations Championship. 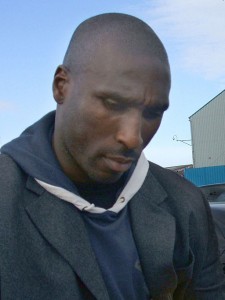 ‘Watch it on TV. Don’t even risk it,’ Campbell told BBC Panorama. ‘Because you could end up coming back in a coffin.’

Campbell’s comments came after revelations that families of England players Theo Walcott and Alex Oxlade-Chamberlain will not travel to watch them play due to concerns of racism and possible violence.

The BBC report brought unwelcome negative attention on UEFA and the host nations just days before the tournament kicks-off. With football’s history of hooliganism and violence, the media coverage has been as much about the potential for trouble as it has been about the ‘beautiful game’ itself.

And many, including Sol Campbell, are questioning UEFA’s decision to award the prestigious tournament to countries with known issues in dealing with racism and violence at football games.

The BBC Panorama report showed several instances of crowd violence during a game in Ukraine. One incident showed a group of young white males turning on supporters of Asian appearance at a stadium that will be used during EURO 2012.

Poland’s chequered past with football violence and racism, especially anti-Semitism, has also been well documented. In 2010, fans of Resovia Rzesznow displayed a large banner in blue and white with the phrase ‘Death to the Crooked Noses’ in reference to Jews. And last year, fans of Legia Warsaw chanted ‘Hamas, Hamas, Jews off to the gas’ to Lodz supporters. Lodz once had a large Jewish population and was the site of a concentration camp during the Second World War.

In Poland, a country that unwittingly became the epicentre of the Jewish Holocaust, anti-Semitism is illegal. But in both games, nothing was done despite the presence of police or club officials. No one was arrested.

A report released last year by Never Again, a Warsaw based anti-racism group, detailed 195 racist and discriminatory incidents in an 18-month period in Poland and Ukraine.

The Never Again report also highlights the tendency by authorities to deny that racism is a problem, which makes tackling the issue difficult. 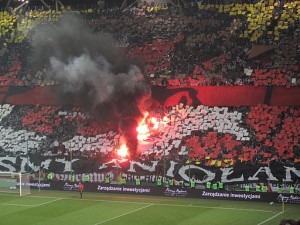 Part of the reason why government officials often dismiss the issue is that racism and nationalism are no longer restricted to small right-wing groups causing mayhem at football games. It has now become part of the political fabric in the region. Even before the popularity of the Golden Dawn party in Greece or Marine Le Pen’s National Front in France, right-wing political parties got a foothold in Poland and Ukraine.

In 2006, the nationalistic Law and Justice Party (PiS) formed a coalition government with two other right-wing parties and held majority rule in the Polish parliament. There are reports that this open expression of nationalism by politicians has emboldened right-wing groups and allowed them to gain even greater influence.

A similar pattern has occurred in Ukraine where right-wing parties, such as Oleh Tyahnybok’s Svoboda, have a strong following, especially in western Ukraine.

The foreign students in the western Ukrainian city of Lviv recently told The Guardian that police did little to prevent racist attacks and many of them are afraid to leave their campuses after dark. Lviv is an Svoboda party stronghold and will host three EURO 2012 games.

Ukraine is also dealing with international backlash over the arrest of former Prime Minister Yulia Tymoshenko. It is widely believed that the charges of ‘abuse of power’ against her are fabricated and the French government have said that it will boycott matches held in Ukraine.

And locally, Tymoshenko’s arrest has disillusioned many Ukrainians, who equate the current government with Russian rulers from their past. This has helped the right-wing Svodoba party gain more support.

All this focus on right-wing groups, racism and politics was not part of the UEFA narrative leading into EURO 2012. The tournament was meant to showcase two of Eastern Europe’s emerging countries. Both Poland and Ukraine suffered severely during and after the Second World War, but have developed quickly, with steady GDP growth and – thanks to low-cost airline deals – increasing tourism.

As expected, UEFA and the host nations have tried to downplay the issue and do not see it as a major problem. A defensive UEFA president Michel Platini even warned that any player who walks off in protest at being racially abuse would be booked.

The Polish Prime Minister Donald Tusk wrote an open letter to English fans, where he acknowledged the existence of racism but wrote:

‘No European country has been able to fully eradicate the problem of racism. We in Poland are also combating this phenomenon, which is neither greater nor smaller than in other European Union countries.’

Ukraine’s foreign ministry dismissed concerns of racism altogether and said they were a ‘dreamed up and mythical problem’.

Though the media coverage of right-wing groups and racial violence have clearly made UEFA and the host nations uncomfortable, anti-racism groups such as Never Again believe the attention will help bring change.

Never Again’s Rafal Pankowski says that the biggest achievement has been to ‘start a dialogue and to raise difficult issues, a process that will contribute to the social development of both our countries.’

But with the kick-off in Warsaw only hours away, dialogue may be too late for the thousands of English fans expected to attend the tournament. The UK’s foreign office has advised supporters of Asian or Afro-Caribbean descent to take ‘extra care’. And the English Football Association is not taking any chances – it will set up special ‘safe zones’ for English fans.

With UEFA and both host nations desperate to avoid embarrassment, all games will have a heavy police presence in and around the venues. There will also be two international anti-racist monitors at each game.

But the true success of the tournament may will be determined by what happens away from the bright lights of the stadiums.