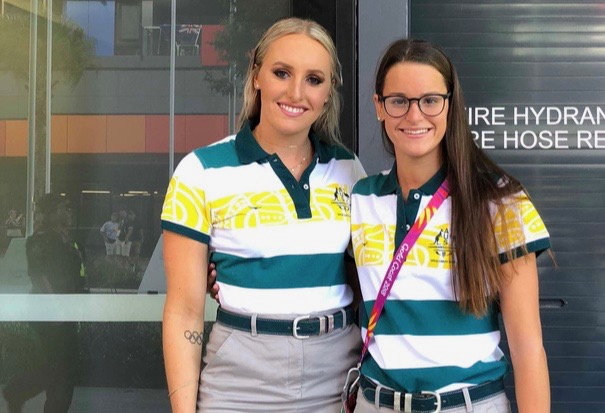 For most teenage girls, the Easter Holidays represent a chance to kick back, switch off and ignore their responsibilities for a week or two.

The 16-year-old swimmer is currently representing Australia in her very first Commonwealth Games, at home on the Gold Coast.

The USC Spartans swimmer secured her place on the 70-strong team selected for the 2018 Commonwealth Games after placing first in the 200m backstroke, third in the 100m backstroke and second in the 400m individual medley trials last month.

Although being such a young age, McKeown is surprisingly level-headed, entering the Games with a strong mindset and refusing to be intimidated by the pressure to perform.

“For me, it’s not necessarily about going there and focussing on my races, I’m more just going there for the enjoyment and taking in my surroundings and learning new things,” McKeown said.

McKeown remains pragmatic about her chances of medalling, despite having out-touched Australian backstroke legend Emily Seebohm by one hundredth of a second at the March trials, marking the third occasion McKeown has managed a win over her compatriot.

For McKeown, it’s not about the confidence she can draw from the victory, but rather an indication of the work that’s needed from here.

“I definitely look up to her as a role model, so I wouldn’t necessarily say that having beaten her three times is a confidence booster for me,” McKeown said.

“It’s more of like ‘okay, you know, I’m getting up into the rankings now. I need to pick up my training and then look at what else I can do.'”

Kaylee stamped herself as a future star of swimming last year at the FINA World Championships, placing fourth in the 200m backstroke and scoring a junior world record in the process. For Kaylee, it was a pleasant surprise and one which she credits with being the highlight of her career so far.

McKeown’s early introduction to the international swimming arena could be credited with the teenager’s level-headed outlook on her life.

McKeown shows maturity beyond her years as she attempts to find a balance between wanting a normal life and being an elite athlete at such a young age.

“I think every athlete has that [struggle] in them no matter if you’re an adult or a teenager,” McKeown said.

“For me, I sort of see it as I’m getting so much more experience and I’ve learnt so many different things that I never ever would’ve been able to experience.”

“So, although I am missing out on all the teenage fun and all that sort of stuff, I’m having my own fun in a different way.”

Kaylee isn’t the only McKeown to have success in the pool, as she joins 22-year-old sister and breaststroke superstar Taylor McKeown on the team.

It’s the second senior team the girls have been on together after travelling to Budapest last year for the FINA World Championships.

The McKeown sisters are just one of three sibling powerhouses on the team, joining Emma and David McKeon, and Cate and Bronte Campbell.

However, the two sisters share more than just genetics. Taylor says that training together at the University of Sunshine Coast under coach Chris Mooney presents some interesting challenges for the pair.

“Yeah, we are competitive,” says Taylor.

“Sometimes we get put together when we do IM (individual medley) work and we always like to have a little fun being competitive and always try and beat each other’s times.”

As she pushes herself to be among the best in the world, things are only just beginning to look up for Kaylee, as she sets her sights beyond the waters of the Gold Coast Aquatic Centre.

“I think every athlete’s dream is to go to an Olympics,” Kaylee said.

“So definitely with Tokyo 2020 coming up I would love to make that team and represent Australia there.”

Hannah Matchett is a second year Bachelor of Media and Communications (Journalism) student at La Trobe University. You can follow her on Twitter @matchett_hannah.