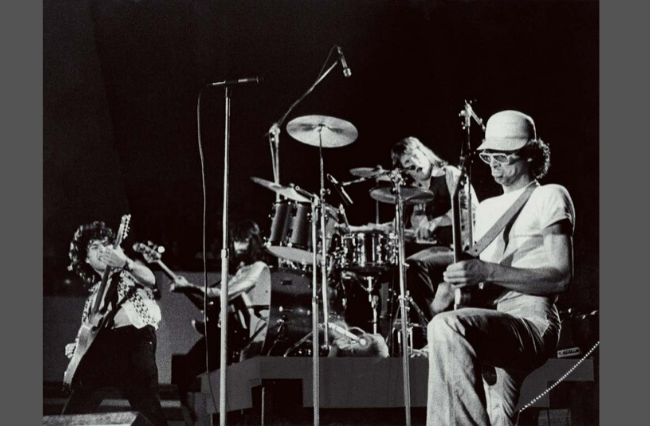 A young Graeme Webber swiftly hoists his single lensed camera by its straps. The band he is working with has just finished their lunchtime concert and stealthily retreated to share a masterfully rolled joint. Dissatisfied with the stage’s poor lighting, Webber finds himself in the small bricked wall bathroom with a charmingly boisterous Bon Scot and a mischievous Angus Young and his camera.

When they saw Webber’s images, the bands was just as happy with the devilish grins captured in the shots. They were clueless, though, to how much history was being made during that impromptu photoshoot. The band, ACDC, would become one of Australia’s most iconic rock bands, and Graeme’s work would be used as the notorious ‘Lock Up Your Daughters’ Summer Vacation Tour poster the following year.

Webber had never anticipated the success that sprouted from something he considered a hobby. Raised in a working-class family, Webber studied at RMIT University, and aspired to a career in graphic design.

“If you ask me what I consider myself,” he told upstart. “I consider myself a graphic designer who uses a camera. I just happen to use a camera a lot. Not exclusively, but a lot.”

In the years following his graduation, Webber successfully launched his own graphic design company with the efforts of a few friends. He successfully gained reputable clients such as The Victorian Arts Centre, Melbourne Theatre Company and even The Australian Ballet.

“[Business] was terrific,” he said. “I had a very rich and lucky life. A whole lot of things had fallen my way.”

However, highly acclaimed for the ACDC shoot, Webber’s reputation as a photographer also grew as he continued to be personally sought out by those who managed some of Australia’s most prominent rock music icons. Although humbled by the recognition, he felt a little self-conscious by his lack of photography education, which he compensated for in after-effect edits.

“When it came time for me to use a camera, I was very embarrassed and aware that I was not a trained photographer,” he said. “So, I used a lot of trickery.”

Playing an instrument wasn’t a skill of Weber’s, nor had he had much of an interest in the theoretical aspect of rock music. His attraction to rock was the way that he’d been drawn in by the brazen-faced characters he attempted to capture in his photos.

“I was fascinated by the superegos involved with rock and roll photography,” he explains. “I made it a point of getting close and being able to take shots that way.”

Webber had continued to collaborate with some infamous artists to create an impressive portfolio. John Paul Young, Australian Crawl and Stevie Wright and were some of the most memorable artists among the seventy or so album covers Graeme had produced. He admits how easy it had been to work for the famous people he had worked for. Instead, difficulties arose more often when Graeme had worked with the smaller artist, the “wannabes” who still weren’t satisfied with where they were.

“I worked with the top people. They didn’t have axes to grind.” He shrugs. “I was dealing with people who had gone for it in a very big way and weren’t frustrated or angry.”

As fascinated as he was with the subjects of his art, business remained his first priority.

Witnessing the unseen scenes in the life of a rock star, Webber came to pity the lack of stability in the career, and rebuts the typical portrayals of fame as an exhilarating lifestyle. Having watched people he once called friends become consumed with the idea of the fame and the money, drugs and girls lifestyle, Webber remains suspicious.

“I wouldn’t be a rock star if I had the chance,” he concludes. “I’ve been up close and personal with all of it, and it’s not what it’s cracked up to be.”

These days Webber lives alone in a one-bedroom apartment on the corner of Spring Street in Melbourne’s CBD. The faint smell of cigarettes lingers in the air, and the TV’s mumbled narration hums in the background. Unframed canvases litter the walls and signed photographs scatter the kitchen table.

At 68, he winces at the thought of living in an aged-care home. He loathes the idea of being looked after, concluding that it is an “ego thing”.

Graeme’s nonchalantly reminisces while he flicks through a bound photobook with a lazy, smile. He can’t imagine seeing himself doing photograph now, and believes the art has lost its essence with the invention of smartphones.

“Things aren’t as good as they used to be. The world is in a very shitty phase at the moment,” he laments.

“I can’t overemphasise how much I loathe Donald Trump.” he vents. “The sixties [was when] I grew up, and whether I like it or not, I’m an old hippie.”

Holding the universe accountable for the favourable outcomes that arose from questionable situations for him, Webber says he would not have done it any other way. When asked what advice he would give his younger self, he sheepishly chuckled at the confidence of his younger self.

“It’s pretty hard to advise young people. My younger self wouldn’t listen. I was a belligerent bastard.” he said. “I never planned it. It just happened that way.”

Article: Achol Arok is a first-year student in the Bachelor of Media and Communication (Journalism) at La Trobe University. You can follow her on twitter: @acholarok

Photo: Used with the permission of Graeme Webber