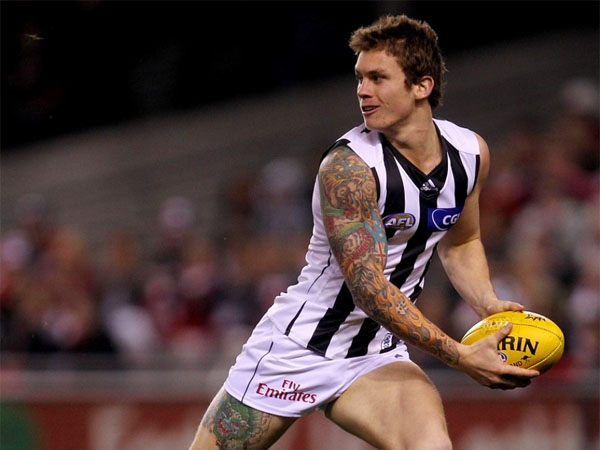 Maybe there is another way to get Dayne Beams to Queensland.

The Collingwood player, whose Byron Bay-based father is in remission from cancer, has learnt the club will only cooperate with his wishes to move closer to home if suitors Brisbane or Gold Coast make an equal trade.

Under current conditions, Beams’ options are down to just three. He may be traded by Collingwood, request a non-football leave of absence, or quit Collingwood and receive a two-year suspension.

But could there be a fourth option in the future? One that allows Beams’ parent club to lend him to either Brisbane or Gold Coast for one year, while retaining the ‘ownership’ rights to the player.

The loan system only exists in one sport: world football. Soccer’s scheme is not without its faults and Arsenal manager Arsene Wenger has called the English Premier League system ‘indefensible’. But introducing it in to the AFL could prove beneficial for all parties. The loan club included.

Could Dayne Beams be staying after all? Pies/Lions not willing to concede on trade demands. http://t.co/12vBQv31XE pic.twitter.com/7F3u2k68Xt

The wishes of Beams to return home are not uncommon in the AFL, and a sick relative has had Collingwood wanting to find a suitable solution. But the club and fans’ convoluted feelings toward the situation has complicated the task. The underlying mood was best summarised by the following fan comment on a Herald Sun article that noted the “time and effort Collingwood had put in”.

“I sympathise with the illness of his father and if Beamer wanted out of footy all together to care for his father, that’s a different matter,” said the comment.

“But sorry champ, you’re under contract. You need to man-up and fulfil it to the best of your ability or go to a club that will trade some young-guns to repay the time & effort Collingwood has put in to you.”

Were there an option to loan Beams out, surely this process would be much simpler.

Collingwood would avoid losing Beams for nothing, and keep the option of trading him the following year available. For releasing a player, they may open an extra place on their list for either an upgraded rookie or state-league player.

Beams, meanwhile, would be happy to be spending more time at home. With better mental health, his physical development would improve at a faster rate than if he were unhappy at Olympic Park. Given time to return home to Queensland, Beams may even consider a second stint at Collingwood.

The positives for Brisbane or Gold Coast are more difficult to acknowledge. Opponents to the system will argue that the introduction of a foreign player for a short-term stint could potentially stagnate the development of the loan club’s own players.

However, the growth of younger players can also be greatly assisted by the arrival of an established player. As a 25-year-old inside midfielder who collected more than 30 disposals in nine games last season, Beams is no slouch. He could feed more ball to the outside midfielders in the young line-ups of either Queensland team. The young Lions or Suns could be eased into the game as Beams fills a hole in the team.

In terms of list management, the loan club would then have another chance of trading for Beams when the season finishes. While, in addition, avoid using a 2015 list spot on an untried recruit.

Introducing a loan system is all about opportunity. Having quality players like Sydney’s father-son recruit Tom Mitchell picking up 64 possessions in the reserves is a wasted opportunity. Mitchell would learn far more from a top-level game than one in which he beats up on lesser sides, like Eastlake. Mitchell could be an asset to clubs needing a midfielder to quickly top up their stocks. His inclusion may not lift a club off the bottom to a premiership but in an ever-closer league of middling teams, Mitchell could help a club from 10th to 6th and, most importantly, finals football.

Carlton has confirmed its interest in Swans midfielder Tom Mitchell and revealed it has spoken to Mitchell’s family: http://t.co/HcSO36mtdj — Carlton FC (@CarltonFC) September 19, 2014

However, one change from the EPL system would be a must.

Arsene Wenger said in April: “I believe that if you want to continue the system (in the EPL), we have to make them available against the teams that loaned them out – or the system is not defensible.

“It is just a protection of the clubs who loan the players out to hurt their opponents, when they have no risk at all.”

That rule does not exist in other major leagues such as Germany’s Bundesliga. AFL fans who are uncomfortable with their club’s players lining up in opposition guernseys should appreciate their player getting game time.

Clearly, even without the EPL’s ‘home rule’, the advantages for the parent club and player far outweigh those of the loan clubs.

However, with the loan club always able to say no, the AFL must admit a loan system would, at the every least, provide more options for player movement than the current system.

Without the scheme in place, the loan club and player alike do not get the chance or opportunity to decide which option best fits their needs. If only Beams had the option now.