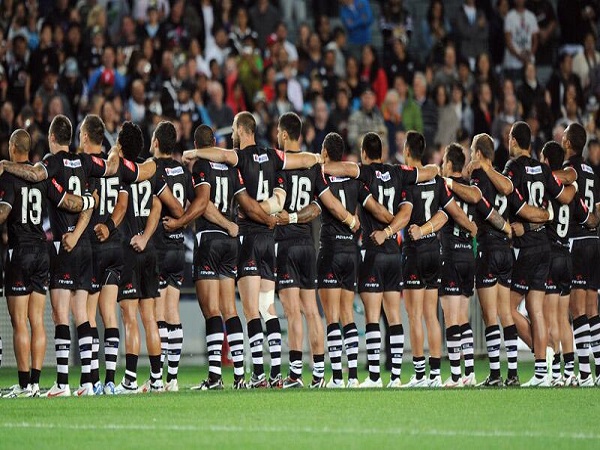 The Rugby League World Cup has been whittled down to a competition between two nations.

Whilst England, one of four host nations, is seen as the only outside chance, everyone’s attention has been firmly fixed on the teams ranked one and two in the rugby league world standings, Australia and New Zealand respectively.

It’s been five years since the Kiwis ousted Australia to claim their first World Cup triumph, and many experts believe the two powerhouse nations will meet again in a repeat of the 2008 final.

Australia is expected to breeze into the quarter finals, after dispatching England in the tournament opener, despite trailing 10-0 after 20 minutes in what was at times a sluggish performance.

In the past five matches, prior to the tournament, three of which were against New Zealand, Australia has scored a total of 156 points and conceded just 56 points, proving it has the strongest attack and defence of the tournament.

Despite England’s gallant effort to hold the Kangaroos attack at bay, the Aussies’ pressure eventually proved too much for the Lions’ defence. Man-of-the-match Thurston took control of the game, setting up two tries before scoring one of his own, after the Lions gifted the playmaker far too much time on the ball.

The Kangaroos now turn their attention to Fiji, and coach Tim Sheens has already spoken out about his plans to rotate his 24-man squad and rest several big name players. With a squad full to the brim with talent, it is unlikely any of the 24-man list will play in every match this tournament.

GET BEHIND YOUR TEAM The Rugby League World Cup is coming to SKY next month! LIVE TV schedule: http://t.co/tmgQwrMTO9 pic.twitter.com/yjqL08qj91

Whilst Australia ran out winners against third favourite England, New Zealand kicked off its title defence in style against Samoa, running out 42-24 winners, but appeared to mimic Australia’s tendency to give its opponents an opportunity to get back into the match.

The Kiwis led 36-4 at one stage, but allowed Toa Samoa to close the gap, scoring four tries before Josh Hoffman, Krisnan Inu, Jason Nightingale and Manu Vatuvei emphasised exactly why New Zealand has the most feared defence in the competition.

Despite the win, it appeared evident that New Zealand struggled without inspirational playmaker Benji Marshall, who played a crucial part on the Kiwis’ maiden World Cup victory in 2008.

However, New Zealand has enormous depth in its forward stocks to cover the Wests Tigers’s absence. Kieran Foran, Shaun Johnson and Sonny-Bill Williams are quality players and it’s only a matter of time before the trio gel to perfection.

Even an uncharacteristic slip denying Williams a try against Samoa, was not enough to dent the Sydney Rooster’s confidence.

Embarrassed to not score, but nothing wrong with a lil humble pie. Congrats to @RLSamoa on there performance. Glad my USO @BoloB87 is ok..

After defeating Samoa, the Kiwis will look to inflict some heartache with some high scoring drubbings against France and Papua New Guinea; the latter has failed to win a single game for 13 years continuing that streak against France on Sunday morning.

Brimming with confident heading into the tournament New Zealand coach, Stephen Kearney, told Sky Sports his side could be even stronger than the world cup winning squad in 2008.

“The depth of our squad is probably one of the best we’ve had, certainly since I’ve been coach, and that’s a pleasing thing for us. We’ve got guys who will have to play well to earn a jumper so that’s a real positive for us,” said Kearney.

Despite boasting arguably the world’s best full-back in Billy Slater, Australia is not unbeatable. And, as discovered in 2008, if one side can knock off the Kangaroos, it’s their rivals from across the Tasman.

Grant Roberts is a third year Bachelor of Journalism student at La Trobe University. You can follow him on Twitter at @GBRRD4L.