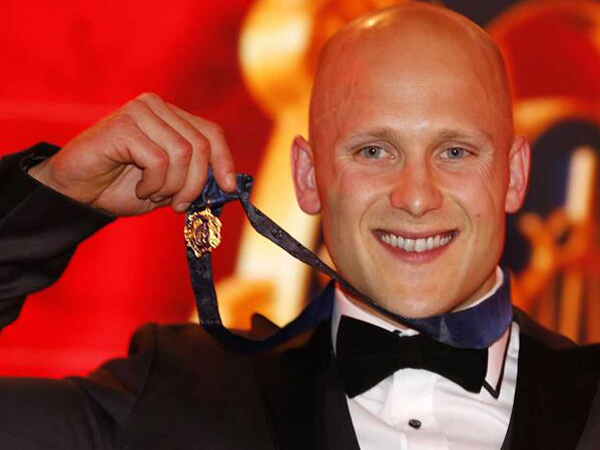 It came down to the very last round of the season before a winner emerged, but in the end a much deserved Gary Ablett walked away with the Brownlow Medal.

The Gold Coast skipper polled 28 votes, and had to fight off some tough competition with Geelong’s Joel Selwood and Collingwood’s Dane Swan finishing just behind him on 27 and 26 votes respectively.

The superstar timed his run to perfection, collecting an incredible 16 out of 18 votes between rounds 7 and 12. However Ablett’s mid-season slump looked set to derail his hopes of winning his second Brownlow, as he picked up only five votes for the next 10 games.

Going into the final round Selwood led the way with 27 votes, Swan just behind on 26, and Ablett was in third place on 25. Yet, neither Selwood nor Swan polled any votes in round 23, whereas Ablett finished strongly and earned the 3 votes for his 33 disposals and four goals against Greater Western Sydney.

After being announced the winner, the dual-medallist took to the podium to say a few words. Ablett appeared particularly humbled by the award, and lamented the fact that he had snatched the medal from the grasp of his close friend and ex-teammate Selwood.

“I’m shattered that I got the three in the last round,” Ablett said.

“Joel deserves to be up here just as much as I do.”

He also paid tribute to his father Gary Ablett senior, who, while never managing to win a Brownlow, was undoubtedly one of the greatest ever players to play AFL.

“I still think he was one of the best to ever play the game,” he said.

“Now that I’ve got two (Brownlow Medals), I can give one to him.”

The medal has reaffirmed Ablett’s decision to quit Geelong and move up to the fledgling Gold Coast club after the 2010 season. At the time, it was suggested that the move was motivated by money and not a real desire to help build a new club, however 2013 has shown that to be false.

It’s been a terrific year for the Suns. They won eight games, and lost another three by under 3 goals, which is a huge improvement from previous seasons. These improvements have not gone unnoticed, with Jaegar O’Meara recently winning the NAB Rising Star Award, and now Ablett winning the Brownlow. Gold Coast ruckman Zac Smith was also awarded the Jim Stynes Community Leadership Award last night for his work outside of football.

Ablett was also awarded the AFL’s 2013 MVP, which was voted on by his fellow players. Ablett won the Leigh Matthews Trophy by an unprecedented amount, polling 1479 votes – Joel Selwood was next best with just 475 votes.

Slowly but surely the Gold Coast Suns are becoming a force to be reckoned with. With their continued improvement, it’s not unreasonable to think that they’ll be pushing for a maiden finals berth within the next two years. Ablett certainly believes so.

“I just really enjoy working with everyone at the football club and I hope we can win a premiership before my time is up.”

If Ablett can continue his incredible form it may just happen. He finished the year with the sixth most disposals, and an average of 31.2 per game. Ablett’s ability to find the ball no matter who his opponent is is what makes him a true champion.

Incredibly, it’s still possible for the Brownlow medallist to up his game. This season Ablett kicked 28 goals and 23 behinds. If opposition coaches believe Ablett is dangerous now, think of the havoc he could wreak if he just kicked a little straighter.

Regardless, Gary Ablett has now well and truly cemented himself in history as one of the slickest midfielders to play the game. I’m sure when he finally retires the debate about which Ablett was better will continue to rage, just as it will now that he’s won his second Brownlow Medal.

Paddy Naughtin is upstart’s sports editor, and a third year Bachelor of Journalism student at La Trobe University. You can follow him on Twitter at @PaddyNaughtin.