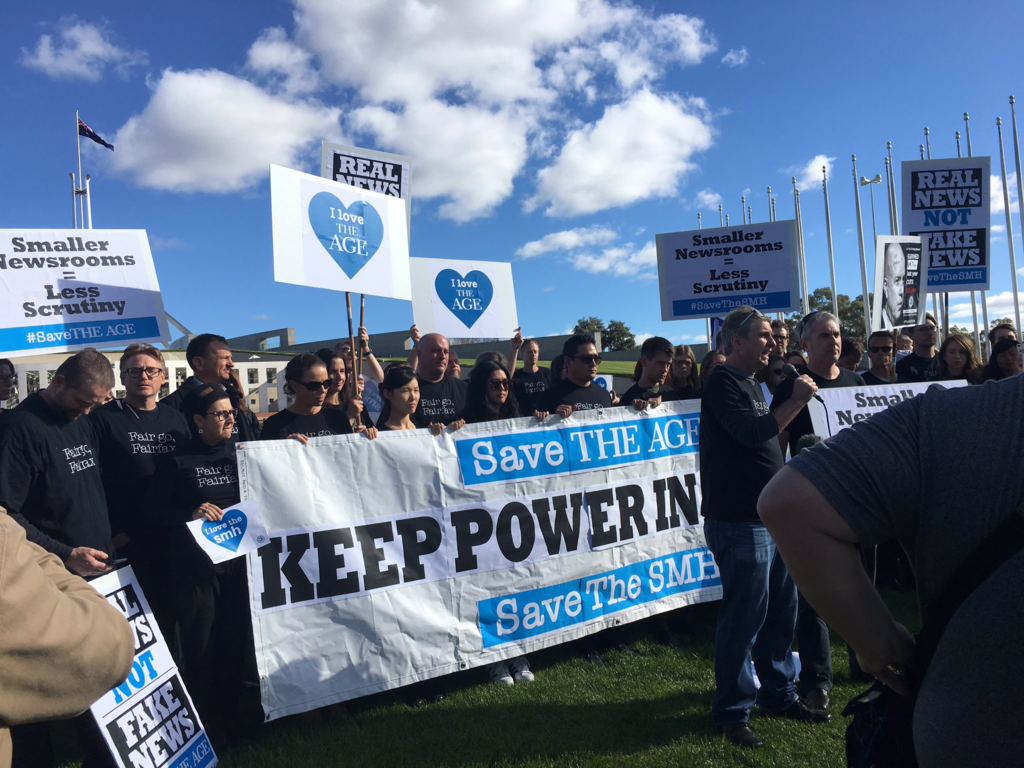 There are concerns for the future quality of journalism following a series of job cuts at some of Australia’s biggest newspapers.

Most recently was Fairfax Media’s decision to cut 120 editorial positions- almost a quarter of its newsroom- at its major Australian newspapers.

On 3 May, Writers at The Age, The Sydney Morning Herald, The Financial Review and the Brisbane Times walked off their post for a week following the announcement, signalling to management that the decision would not wash over lightly.

The Age’s Chief Sports Columnist, Greg Baum, was surprised at the magnitude of the cuts and was led to believe that there would be no further redundancy cuts at the beginning of this year.

“We felt as if we had been taken for dupes,” Baum tells upstart.

“In previous rounds, Fairfax’s mantra has been that the cuts would make us more efficient and more able to produce quality journalism. I think everyone sees through that lame line now.”

With the cuts affecting roughly 25% of editorial staff across the metropolitan mastheads, questions were raised about how it will affect their ability to cover news.

HUGE difference in The Age today with their journos back. Shows what quality journalism delivers: analysis, context, interest #FairGoFairfax

Included in the strike was the 2017 Federal Budget, a crucial time for reporting in Australia.

Among those missing from the coverage this year were budget veterans Ross Gittens and Peter Martin, who between them had covered 62 federal budgets.

“All the cuts they’ve made so far, which have been equally as deep, have manifested themselves in poorer newspapers. One imagines that any further cuts would do precisely the same,” Howe tells upstart.

At times like this the solidarity between journalists is greater than the rivalry between news outlets. #FairGoFairfax pic.twitter.com/KX5t7To4kH

Fairfax and NewsCorp have been the dominant voices in Australian print journalism for the last hundred years. Both have suffered with the decline of newspaper sales.

Tom Cowie, crime reporter for The Age, said that journalists wanted to show Australia what coverage of major events would look like without Fairfax journalists.

“We wanted to show what the federal budget would look like without the coverage of respected and experienced journalists that had covered over forty consecutive budgets,” Cowie tells upstart.

The loss of experience that senior editors and journalists from Fairfax newsrooms would be felt by all.

“It’s also about seeing all of that experience walk out the door. Some of them have been with the company for over twenty-five years,” Cowie says.

“When they go, they’re unable to share that experience, wisdom and contacts.”

The May 2017 redundancies are just one of many round of cuts made by Fairfax in the last few years.

NewsCorp have not been immune to job cuts either. In December 2016, they announced that a large number of newsroom jobs would go as the company aimed to make $40 million in savings.

To some, the decline of newspapers can be traced back to their initial hesitancy of the internet and the way they handled online content.

“Newspapers were unsure about the internet for quite a while, so unsure that many of them made the mistake of giving their content away which has proved not to be in their best interests,” Howe says.

With the transition towards online news, Howe is concerned about adequate training in a time where the media can often be viewed as unreliable.

“If you want the discipline and the training of journalists, you need to turn to newspapers. That’s why radio and TV newsrooms start their day by reading newspapers,” Howe says.

In 2015, over 70 jobs were cut from regional newsrooms. In March 2016, Fairfax staff went on strike after the company announced its intention to cut over 100 jobs.

Standing strong with @smh @theage press gallery colleagues who are missing the budget to strike for independent journalism. #FairGoFairfax pic.twitter.com/8GzV2VntLj

Howe believes it costs a lot money to run an experienced newsroom with well-trained journalists.

“You won’t get the same from some shoe-string operation,” Howe says.

Yet, as we shift into an age where 51% of people are now using online platforms as their primary news source, these outlets are the ones now providing young journalists with jobs opportunities and training.

Where some see limitations, others see opportunity.

“For young journalists, it means having to look more broadly, different platforms, at other outlets for the future,” Baum says.

This is seen in the rise of online media outlets like Junkie, New Matilda and Buzzfeed News.

Cowie believes that job seekers must be prepared to broaden their horizons.

“People just need to be willing to get outside their comfort zone, go to regional areas,” Cowie says.

The ABC recently announced its intention to fund 80 jobs in regional and rural Australia over the next eighteen months.

“Regional journalists with the ABC are probably the most multi-skilled group of journalists, if not in the country, than certainly at the ABC,” Martin says.

While some choose to stay regional, many journalists who begin their careers in regional Australia find their way into city newsrooms.

“You may not be able to get a job at The Age straight away, but you can certainly work your way there,” Cowie says.

In order to ensure the future of The Age and other metropolitan mastheads, journalists are urging consumers to pay for what they read.

“Pay to support something you think should be around. We get paid for what we do. If you want quality journalism or any kind of journalism, you should pay for it,” Cowie says.

“It doesn’t matter what outlet you read, if you like it, you should support it.”

“Subscribe. It won’t pay all the bills, but it will signal to management in all organisations that there is still a yearning for good journalism. After all these years, we’re still only talking about the price of a cup of coffee a day.”

Jessica Coates is a third year Bachelor of Media and Communications (journalism) student at La Trobe University. You can follow her on twitter @jesscoates4