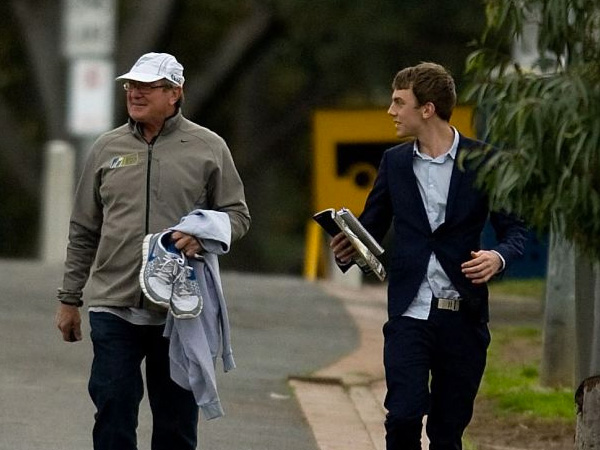 The AFL season finished barely one month ago but instead of winding down, AFL.com.au’s Callum Twomey is gearing up for his busiest month of the year.

November is AFL draft month where all the AFL clubs convene on the Gold Coast to select from a pool of the best young talent around the country in an attempt unearth the next superstar player.

Recruiting has become an important industry in the AFL, with clubs having specialist recruiting departments, sometimes with five to six members, working throughout the year to identify the best talent to bring to their club.

Twomey has been working at AFL Media for four years and has carved out a niche for himself as the resident draft guru.

“It’s certainly something that I love doing,” Twomey tells upstart.

“When I was coming through in my school days I knew guys that were getting drafted and always thought that was pretty interesting.”

Those school days were at Caulfield Grammar and that experience of following young footballers through their draft year is something Twomey was able to replicate a few years later when working for AFL.com.au.

Late in 2011 he got the opportunity to do a piece on draft hopeful Brandon Ellis, who ended up at Richmond.

In 2012, he got to spend time with Vic Metro football team, the eventual winners of the Under 18 championships, a carnival designed to showcase the best under 18 talent in the country.

“I managed to sit in with them pretty much the whole way through the championships as a bit of an inner sanctum type story and that’s when I thought it’s something I’d like to do a bit more of.”

2013 was Twomey’s first year as a specialised draft reporter and it culminated with a 50-minute video documentary in which he follows three talented draft prospects throughout the entire draft process.

“I loved doing that, it was great fun. It’s probably the thing I’m most proud of in terms of work so far,” Twomey says.

The video is called ‘Draft Days’ and follows Jack Billings, Luke McDonald, and Ben Lennon, who all went on to be drafted in the first round of the 2013 draft.

Growing up Twomey used to devour the sport section of the newspaper, in particular the cricket writing, and being a journalist was always something he wanted to do.

“I always wanted to be a journalist, in particular a footy journalist. I used to go to the footy with my old man as a kid and used to sit in front of the press box at the MCG and I thought that would be a pretty good job,” Twomey says.

Twomey then made it his mission to break into AFL journalism and set about getting his name out there as early as he could.

When he was in year 11, Twomey got the opportunity through a teacher to interview Chris Judd, one of the competitions premier players, who had been a student at Caulfield Grammar a few years previous to Twomey. Twomey wrote an article from this interview and sent to through to a contact at Slattery Media where he had done some work experience.

At that time Slattery Media were publishing the AFL Record and they were happy to publish Twomey’s article.

“That was pretty exciting at the time. It was my first story that had been published in a reasonable platform,” Twomey says.

“The more experience you get, the more you know what to do the next time.”

“With every experience you sort of get closer and closer to nudging your way in somewhere.”

Twomey maintained this proactive and persistent approach throughout university where he studied journalism at Monash.

“I pretty much contacted editors at as many newspapers and magazines as possible, did a bit of work experience at radio stations,” Twomey explains.

“In the end no one gets a story from sitting on the couch and doing nothing, you’ve got to at least try and get your name out there.”

Getting his name out there is something Twomey has been very successful at in his career to date. After getting a job straight out of university, Twomey had only been working for a couple of years when he won the rising star award at the Australian Football Media Association Awards in 2012.

“That was awesome, I certainly didn’t expect it, I had no idea going to the night,” Twomey says.

“I remember someone saying to me that it will be good for my profile if nothing else, and it certainly was, the whole industry is there that night.”

Twomey now produces AFL.com.au’s annual phantom form guide ahead of each year’s draft and last year Twomey justified his standing as a draft expert with some astute judgement.

Of the 30 players Twomey identified as representing the best talent in the draft pool, 27 of those players were selected inside the first 30 picks of the draft, with the remaining three picked later on in the draft.

It’s a remarkable achievement but Twomey says this year’s draft is much more even than last years.

“It’s one of the most fascinating years of all-time in the draft, at least in recent years, because there’s no absolute stand out, and it could go a few different ways,” he says.

“It’s exciting we are heading into this years draft with it up in the air, unlike previous years when everyone pretty much knew who was going number one.”

Jim Files is a first year Bachelor of Sport Journalism student at La Trobe University. You can follow him on Twitter: @filesjim.