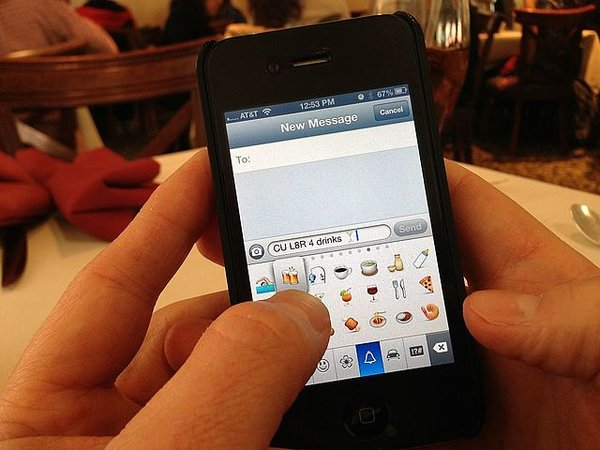 Emojis have become a popular addition to online communication.

This era has even been referred to as the emoji-pocalypse.

They are considered an extension of standard communication, however, experts believe that excessive emoji use will negatively affect written language in the future.

But emojis aren’t a new concept.

The use of emoticons, a typographic display of a facial representation, eg. :-), dates back to an issue of Puck Magazine in 1881.

They were first described as ‘typographic art’, and were created using punctuation marks on a typewriter. The first emotions depicted were joy, melancholy, indifference and astonishment.

They’ve come a long way since then. The emojis we use today are mostly picture based, rather than text, and there are hundreds of options available.

They can be seamlessly integrated into online conversations, and are used for a variety of reasons, for example to communicate thoughts, or to add lightheartedness to a message or email.

According to market research, 80 per cent of 18-65-year-olds use emojis in written communication on a regular basis.

The announcement that Facebook will implement emojis alongside the ‘like’ button exemplifies the shift to use visuals to describe emotions.

Vice president of social media at Big Spaceship, Victor Pineiro, said that with an increase of emotional data based off emojis, organisations will be able to determine the success of their social media posts.

“It’s one thing to post paid content and get many likes, but it’s another thing to get lots of angry or sad emojis. It’s really valuable for advertisers to get diverse emotional responses,” he said.

He said that emojis are “non-verbal cues” presented as verbal cues, while communicating non-verbal information.

“Linguists rarely consider any new aspect of communication to be something harmful, as new developments are all generally part of natural processes of language variation and change over time,” Schembri says.

“As far as I can tell, emojis simply allow for an alternative form of communication, and may even sometimes be helpful as they can represent aspects of intonation and facial expression that are missing from written English.”

“It is a desire by users to make the rather impersonal nature of social media exchanges more personal,” Debrett says.

“The power of social media is obviously its instantaneous and networked nature and thus nuance, which takes time and consideration, is hard and while that’s not to say we shouldn’t try to make social media posts do more with the help of emojis.”

She says that in all communication, the ultimate meaning taken from these pre-set expressions or emotions lies with the receiver.

She also says that laziness has existed in writing for some time, with shortcut texting and using numbers instead of words.

Younger generations tend to gravitate to written interactions, rather than verbal communications, and Debrett believes that this is not necessarily a good thing.

“For personal communication, however, nothing compares with face to face, where the whole range and tone of voice along with the complex nuances of body language and conversation in complete sentences leaves 140 character messages for dead.”

But Debrett admits to using emojis herself, saying they’re more convenient and can be used quickly and simply.

“Sometimes one emoji is all you need instead of writing ‘sure’ or ‘okay’,” she says.

21-year-old university student, Maddy King, tells upstart that emojis add jest to what she is trying to communicate.

“I find sometimes the tone of my messages are far too formal and the right emoji can indicate exactly what I mean,” she says.

“I don’t think it takes anything away from the written English language, only adds to it in its own unique way.”

Emojis have become a universal language of their own, but can also be added to established language to add character to simple messages.

Lucille Sadek is a third-year student studying strategic communication and journalism. You can follow her on Twitter here: @Under_Tones.