With a new round of Fairfax job cuts announced yesterday questions about The Age's future have come to the forefront, Cait Kelly reports. 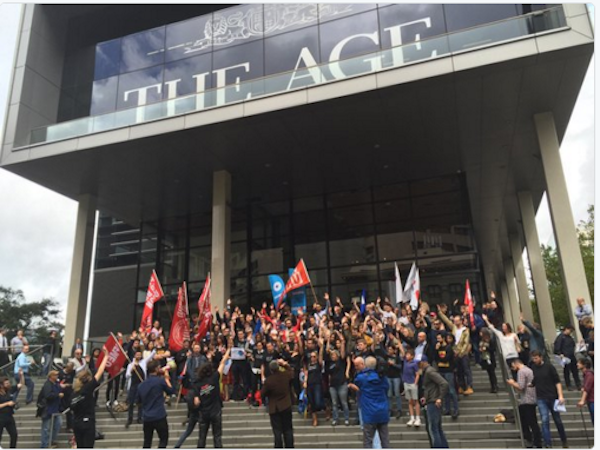 As hundreds of Fairfax journalists strike across the country this weekend, the question of how these cuts will affect the quality of content produced by the company lingers.

Dr. Andrea Carson, who lectures on Media and Politics at the University of Melbourne, and completed her PHD in the future of investigative journalism, says that the cuts will affect the ability of journalists to find new stories.

“There are going to be editorial cuts, so journalists are increasingly going to be doing more with less time, less resources and spreading themselves fairly thin to be able to meet the very fast 24 hour news cycle,” she tells upstart.

“I think increasingly we’ll see journalists following the news of the day rather than finding original stories.”

Although it hasn’t been decided which specific areas these cuts will take place in, Dr Carson thinks there will be a distinct loss in speciality reporting.

“Those areas that are probably going to suffer are what we call accountability reporting. Those that were traditionally the rounds where several journalists were assigned to a particular story area,” she says.

“There will be fewer story areas that will have one journalist dedicated to them, if at all.”

“We are hoping that we will minimise the job cut aspect of what they’re processing because if they go too far it will narrow what we are able to cover,” he tells upstart.

“We will not be able to cover all of the areas we cover now with the same amount of quality and even management has accepted that.”

According to Alexa, the California based web analytics company, the SMH and The Age websites are ranked as Australia’s 2nd and 7th most popular news sites.

However, last year’s Roy Morgan tally of print readership showed a decline in the circulation of both the papers Monday to Friday editions.

Many subscribers are frustrated by the move from Fairfax management as they seek to absorb the loss of revenue previously derived from print.

Marcus Gheller, a nine year subscriber to The Age, says he has already noticed a decline in quality.

“I’m definitely concerned about the quality going down, I’ve noticed a marked decline for a while now, both in terms of actual content, and also grammatical and spelling errors,” he tells upstart.

“Any further cuts to The Age are definitely something that will make me consider my subscription.”

Dr Carson says a potential decline in quality is something readers like Gheller should get used to.

“Journalism itself is not in trouble, it’s the traditional cultural institutions such as The Age which are in trouble,” she says.

“There will still be good journalism and Melburnians and Sydneysiders will find their news in other ways, but this transition with the large news rooms shrinking rather rapidly is going to create a deficit in the short term.”

In February of this year The Australian reported that in 2013, Fairfax had conducted analysis into the costing of discontinuing the print versions of their mastheads.

At the time of the analysis there were several reports that Fairfax would discontinue its Monday to Friday print editions, rumours that the company hasn’t been able to shake since.

Strom feels the chances of that happening are low.

“I think there was some consideration of that but I think the company realises that to do that, it would effect the entire brand of Fairfax much more deeply than just the cost cutting exercise that they would achieve through stopping Monday to Friday print,” he says.

Dr Carson disagrees, saying by announcing these cuts the company has already hurt its image.

“I think that the print edition Monday to Friday is in its last days. In another 12 months I would be surprised if it was here,” she says.

“The Age had such a wonderful history in Victoria and in particularly in Melbourne and they’re just eroding away the goodwill that’s associated with that brand name by moving away from showing a strong commitment to quality journalism.”

As Fairfax staff prepare to fight for their jobs over the coming weekend, Strom has a rallying cry for all readers.

“I hope they’ll be spurred into action to join with us to defend quality journalism and contact Greg Hywood and the Fairfax board to tell them this is not what they expect form the mastheads that they love,” he says.

Cait Kelly is a staff writer for upstart and a third year journalism student. You can follow her @CaitKelly1.