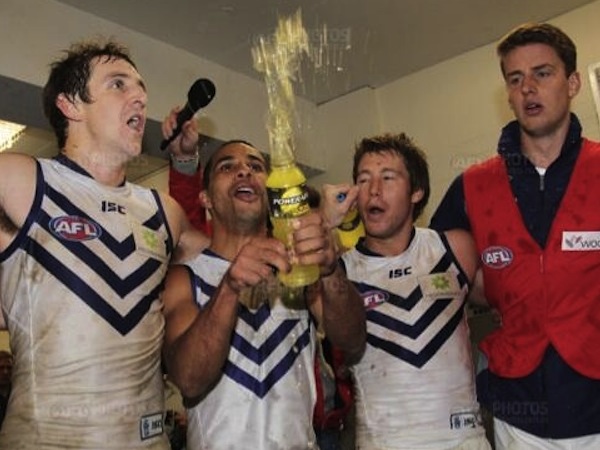 Ross Lyon’s imprint is firmly on this Fremantle team. In rainy, windy, horrible conditions against Adelaide at AAMI Stadium on Saturday, the Dockers produced a masterful display on hard, disciplined football – right from Lyon’s textbook.

Michael Barlow was superb with 32 disposals – 22 of which were contested – 11 clearances, eight tackles and a goal, while Luke McPharlin and Michael Johnson were magnificent in defence.

The thought of Fremantle welcoming back the likes of Matthew Pavlich and Aaron Sandilands later in the season is an ominous prospect for opposition sides. Can Lyon lead Fremantle to its first premiership? It’s not out of the question.

Led by inspirational superstar Gary Ablett – back on Geelong’s home turf for the first time since his defection to Gold Coast in 2011 – the Suns pushed the Cats all the way until three-quarter-time, before a nine-goal to one final term put the contest to bed.

Gold Coast’s performance comes just a week after they threatened an MCG boilover against Hawthorn. The increasing level of consistency and improved output is indicative of the upward direction they are heading.

It’s all about to end for Mark Neeld. Sadly, the damage was presumably done even before a humiliating 95-point loss to Hawthorn at the MCG.

Just hours before the first bounce on Sunday afternoon, news of a board meeting to discuss Neeld’s future was leaked. The meeting is scheduled for 1.00pm today. Neeld’s 18 months of misery is expected to end. A drubbing at the hands of the Hawks certainly wouldn’t have helped his cause.

The Demons played competitive football in the third term, and even won the quarter. However, they were typically lackluster for an overwhelming portion of proceedings. The spiritless output has been a telling feature of Melbourne under Neeld. In 18 months, he’s failed to stamp his authority on the club. Although unfortunate, his sacking may be justified.

What’s the best way to avoid a potential fifth loss by under a kick? Put yourself 55 points in front by quarter time. After another hard, tormenting week, North Melbourne put a series of close defeats and second-half fadeouts behind them with a blistering nine-goal to one opening term against St Kilda.

In Brent Harvey’s 350th game, as well as Daniel Wells’s 200th, the Roos came out all guns blazing to start the contest. Young forward Aaron Black kicked four first-quarter goals as North virtually put the match to bed by the first interval.

Black ended with five for the match, while Harvey kicked four goals as well as amassing 23 disposals in his milestone match. Drew Petrie also booted four as the Roos ended what was a week from hell on a positive note.

Player of the Week – Ryan Griffen

After suffering the full brunt of the media’s criticism for “underperforming” in recent weeks, the Bulldogs have put consecutive victories together, with midfielder Ryan Griffen an integral figure.

On Saturday night, amid 33-degree heat and taxing humidity in Darwin, Griffen inspired the Bulldogs to overturn a half-time deficit and beat Port Adelaide by nine points.

The Bulldogs midfielder amassed a staggering 40 disposals – 20 of those contested – as well as racking up eight clearances, eight inside 50s, nine tackles and a goal.