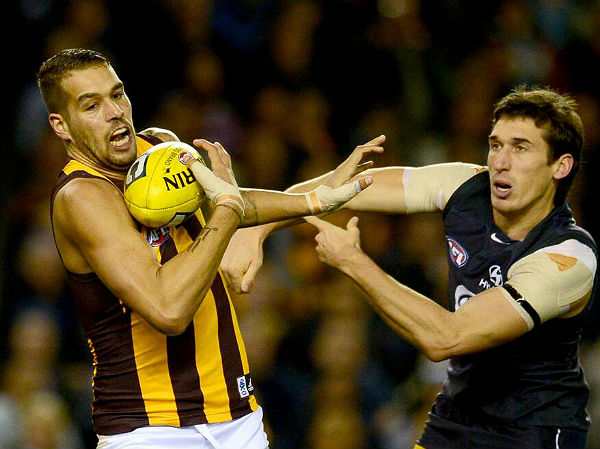 Hawks make it a perfect 10

It was far from a perfect performance from Hawthorn, but they did enough to keep their 10-match winning streak going against a spirited Carlton side on Friday night.

Having come off a month against GWS, Gold Coast, Melbourne and the bye, Hawthorn could be excused for not matching Carlton’s intensity for the first half.

As a result, they went into the main break 11 points down.

However Jarryd Roughead and Lance Franklin both kicked bags of four as the Hawks booted a nine-goal to five second half to win by 15 points.

Over the last decade, finals have been a foreign concept for Richmond supporters. However, some of the yellow and black faithful may be forced into cancelling their usual September holidays after the Tigers solidified a spot in the top eight with a convincing 38-point victory over Adelaide on Saturday.

Inspired by a sensational display from Dustin Martin, the Tigers led at every change to easily account for the disappointing Crows on a wet day at the MCG.

Martin kicked four goals to go with his 19 disposals; while Brett Deledio and Brandon Ellis were impressive with 28 and 23 possessions respectively in the strong win.

Disciplined Dockers on their way to top four

Ross Lyon’s game plan has well and truly struck a cord with Fremantle’s playing group. Under the strict former-Saints coach, the Dockers look the real deal in 2013 and could be on their way to just their second top-four finish in their 19-year history.

Remarkably, Saturday’s 40-point win over Brisbane was their third (of eight wins) despite kicking 12 goals or less. They also recorded an impressive draw with Sydney – at the SCG – despite only kicking 11 goals. Plus, the defence has only let through 770 points so far this season, the least of anyone in the competition. It goes to show the rock solid defence Fremantle has built under the coach who prides himself on conceding low scores.

Fremantle has a relatively simple run-in for the remainder of the home and away season, with six of their final 10 games at Pattersons Stadium, all of which are against sides outside the top eight. In fact, the Dockers only play two current top-eight sides in their final 10 matches – Richmond and Carlton, both in Melbourne.

If they can take advantage of a reasonably soft draw, Fremantle could be looking at a crucial double chance come September.

Daniher gets off the mark

Essendon fans have found it hard to keep a lid on their Joe Daniher hype and the competition caught a glimpse of why on Saturday night. Playing in just his second senior game, the 19-year-old kicked three first-half goals in the Dons’ 43-point victory over Gold Coast.

Along with the three goals, Daniher also managed 17 disposals and eight marks in a promising display.

The youngster still has a lot to work on, most notably his set-shot kicking and positional play, however all the signs point towards an impressive future for the sixth Daniher to don the red and black.

When the AFL embarks on its next attempt to sell “our great game” overseas, they’ll certainly omit last weekend from any highlight packages.

While Friday night’s clash represented the closest thing to a decent contest, the remaining five matches were nothing short of blowouts, with Richmond winning by 38; Fremantle by 40; Essendon by 43; Port Adelaide by 75 and Collingwood by 34.

Such is the nature of the abridged bye round schedule adopted by the league, a lack of games has drastically weakened the weekly product.

After a similar story last weekend, footy fans will be champing at the bit to bid goodbye to byes in Round 14.

Player of the Week – Scott Pendlebury

The soon-to-be Collingwood captain racked up another 35 disposals in a comfortable 34-point win over the Bulldogs on Sunday evening.

Incredibly, with teammate Dane Swan racking up 38 touches, it was the 34th time the pair had both joined forces to each accumulate over 30 possessions in the same match.

However it was Pendlebury’s 10 clearances, six tackles and a goal that took him past Swan and earned him the Player of the Week award.