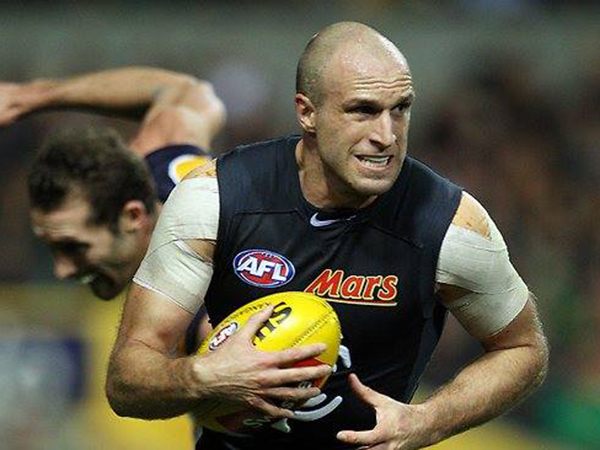 On June 9 2015, the great game of Australian Rules football can regrettably add another man into the category of “retired generational stars” with the announcement of Chris Judd’s immediate departure from AFL due to a debilitating ACL injury.

Judd was taken at pick 3 by West Coast in the now famous 2001 “super draft”, a draft that included future stars Luke Hodge (pick 1), Luke Ball (pick 2), Jimmy Bartel (pick 8), Nick Dal Danto (pick 13), Steve Johnson (pick 24) and Sam Mitchell (pick 36). Judd made his debut in Round 2, 2002 and never looked back. Arguably, having one of the best rookie seasons ever, Judd played 22 consecutive games where he averaged 15.0 disposals along with kicking 23 goals, finishing third in West Coast’s best and fairest and winning the AFLPA Best First Year Player Award. This was just the start of a long decorated career, which reached new levels in 2004 after a breakout game against eventual premiers Brisbane in 2003 when Judd scored five goals in the first half. The AFL world was in awe of Judd’s ability to win the ball in and under and then break open a pack with his explosive speed and power and they knew they had something special gracing their game.

The 2004 AFL season belonged to Chris Judd. He averaged 22 disposals and kicked 24 goals for the season and became West Coast’s first Brownlow Medallist, polling 30 votes to finish seven ahead of runner-up Mark Ricciuto. He also received the first of his seven All-Australian selections, again being regarded as one of the best 22 players in 2006, 2008 (named captain), 2009 (vice-captain), 2010 and 2011 (vice-captain).

After another outstanding season, which saw Judd win Goal of the Year and the North Smith Medal in West Coast’s four-point loss to Sydney in the 2005 AFL Grand Final. He was named captain of West Coast for the 2006 season and took on the captaincy at a difficult time, due to former captain Ben Cousin’s drug scandal. In what he regarded as his career highlight today, Judd captained the club to the 2006 AFL Premiership in an epic one point victory over Sydney in a replay of the 2005 clash. Judd’s final two years at West Coast were diminished by chronic groin injuries and at the end of the 2007 season, Judd requested a trade back to his homeland of Victoria.

In what was one of the most publicised trades of all time, Judd confirmed his move to the Carlton Football Club on October 11, 2007. He converted from a breakaway pace player to a contested ball magnet at Carlton and was named captain upon his arrival. He finished the season as Carlton’s best and fairest player as well as being named All-Australian captain, both are feats he would repeat in 2009.

In 2010, two seasons after his arrival at Carlton, Judd once again had a mid-career breakout. He polled 30 Brownlow votes to win his second “Charlie” after a season which saw him return to his best.

His later years at Carlton were marred by injury yet we still saw glimpses of the old game changing pace and skill he showed in his early years. A 2011 game at the SCG against Sydney, reminded many fans of what Chris Judd could bring to a game. Judd collected 21 second-half disposals (33 overall) and obliterated the Swans with a career-high 15 takeaways at stoppages. Judd single-handedly dragged his team over the line and proved to everyone that he still had it.

For all Judd is remembered for, his time at Carlton was not without its negatives. In 2009, he was suspended for eye-gouging Brisbane’s Michael Rischitelli and again, his tactics where questioned when he applied a “chicken-wing” tackle on Leigh Adams in 2012. Yet nobody has questioned Judd’s character as a person. He is one of the most well-respected players to ever grace the game, as seen today by the outpouring of support and especially on Saturday as Judd left the ground, for what is known now as the last time.

Ryan Rosendale is a Bachelor of Media & Communication student at La Trobe University. You can follow him on Twitter: @rosendaleryan