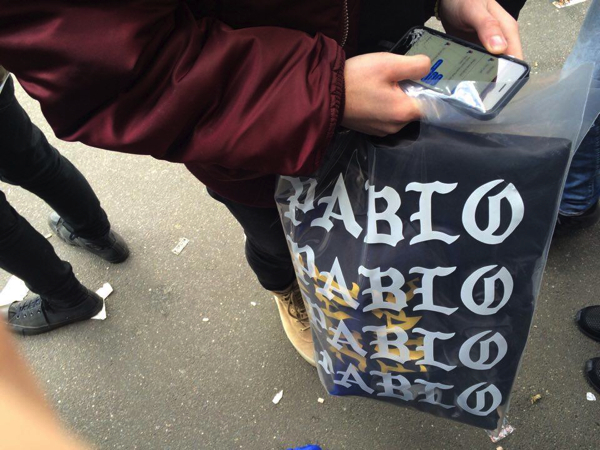 Melbourne was teeming with eager Kanye West fans over the weekend, when the rapper and fashion designer announced he was selling his limited edition merchandise in pop-up stores in 21 countries across the world.

The announcement was made through Twitter on Thursday at 6:05pm AEST.

The news had media outlets scurrying to Fitzroy on Friday morning to cover the three-day event.

Among the crowd was photojournalist Liz Sunshine, who was covering the event on Saturday for Vogue Australia. She says it was an executive decision not to come on Friday because it was raining.

“The fashion probably wouldn’t be as inspirational just because of raincoats and umbrellas. [It] would be a bit of a harder project,” she tells upstart.

Sunshine, who specialises in shooting street fashion, says when it comes to finding a unique angle in photojournalism it’s about combining your personality with your skills.

“Practice, know what you want and find a unique angle,” she says.

“I wouldn’t be working with someone like Vogue or all of my other fashion clients if I wasn’t who I was.

“I still have my own site and … I’m constantly producing content that is just because I want to. So keeping that sort of passion alive.”

Saturday’s 10-am opening had Kanye West fans and fashion followers braving the cold in the early hours of the day, with some even sleeping overnight outside the Brunswick Street pop-up.

The West fans were in full force wearing his clothing, playing his music and socialising amongst themselves, welcoming the fact that waiting for hours in the queue was part of the experience.

“I think different people have different interests. They spend their own money on what they want,” she tells upstart.

“You can say that to someone who spends $100 on a nice dinner or however much on make-up. I think everyone has different values on what they wanna put put their money towards. This is not too much more [expensive] than a store like Zara or Myer.”

The cheapest item on offer was a $50 hat while the most expensive item you could purchase was a $400 jacket. Each of the 21 stores across the world sold styles that were limited edition in each location. Specially sold for Melbourne was the ‘I Feel Like Pablo Daisy T-shirt’ which was all yellow with green writing, sporting the national colours of Australia. 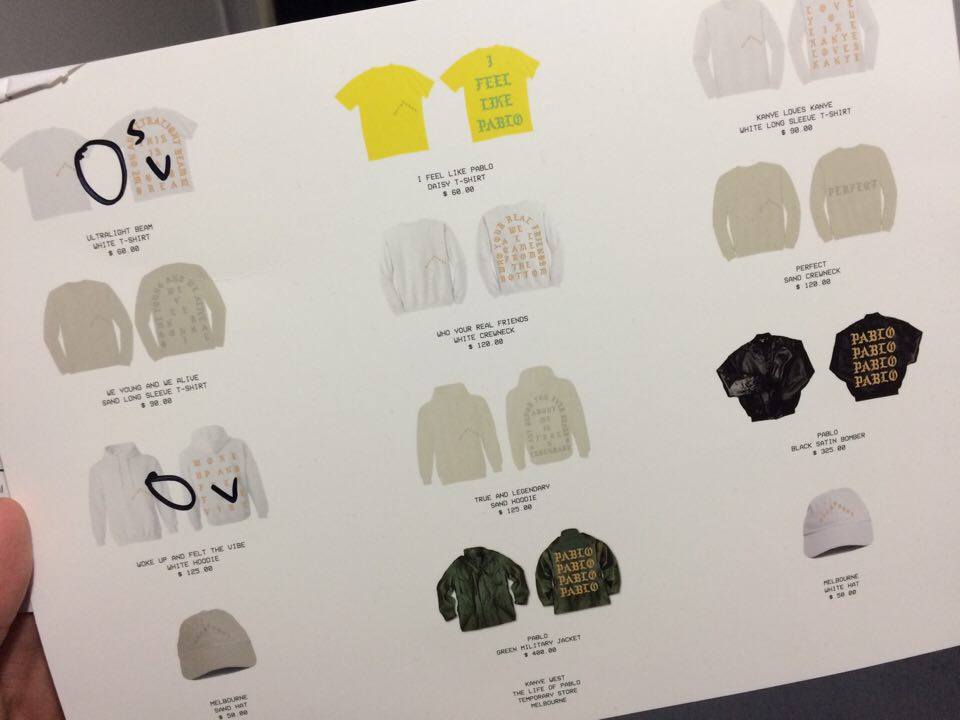 The Melbourne pop up store items on offer

21-year-old West fan James Erdeg, says in coming to the pop-up store his aim was to collect as much of the limited edition merchandise as he could.

“The last pop up shop I bought everything that was there and I’m trying to do that again here,” he tells upstart.

“Its not about hype and stuff like that. For me I work hard and for me money is not really a factor and I think supporting people that I relate to and people that I look up to is the most important thing and you cant really put a price on that.”

Erdeg was dressed head-to-toe wearing almost all Kanye West attire. His white hat he had bought the day prior. 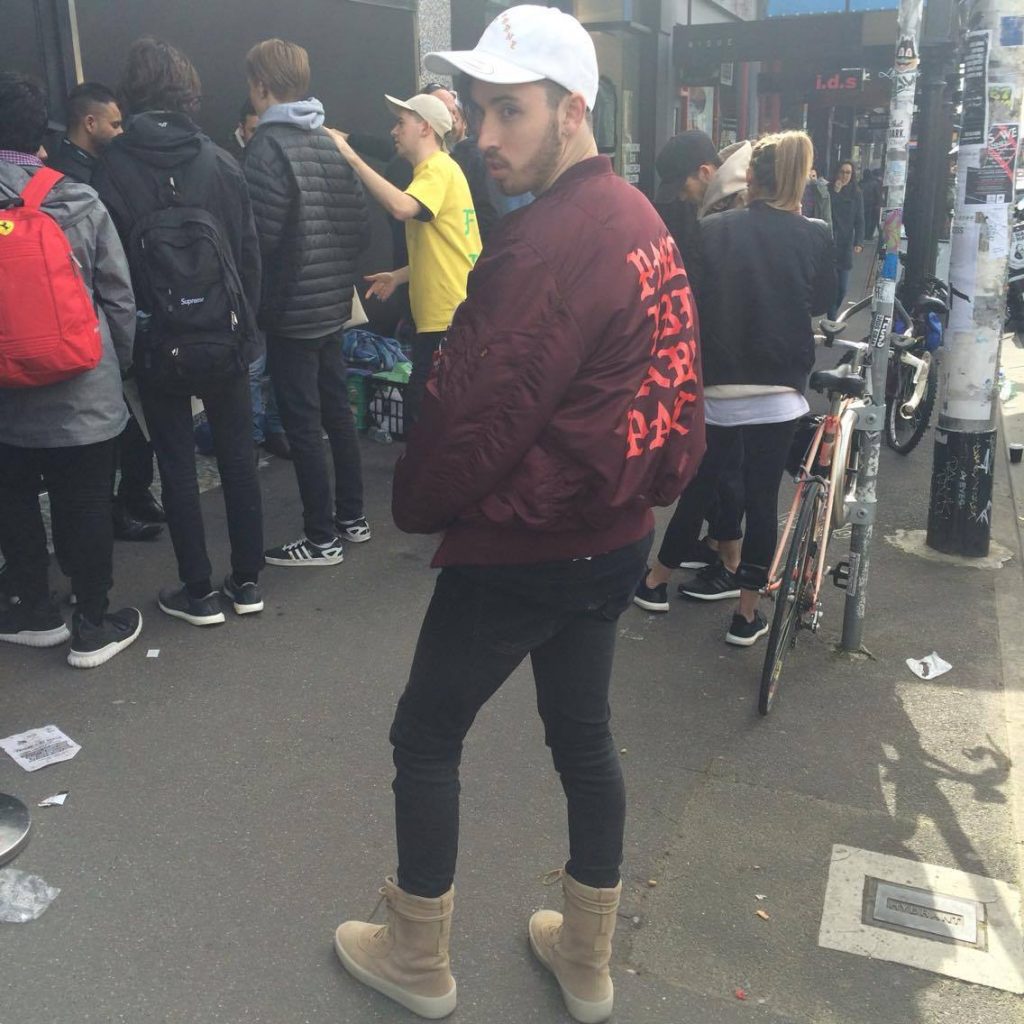 Erdeg in his Yeezy attire outside the Melbourne pop up store

“My Pablo bomber I got from L.A cost me around $600 dollars. My shoes, Yeezy Season Two boots, I paid $950 here in Melbourne,” says Erdeg.

It is this loyalty demonstrated by West fans, which Sunshine believes is where a story can be found.

“The pictures are the story,” she says.

“Each picture will go back [to Vogue] with like a little blurb about the picture, like who’s in it, how long they’ve been waiting, why they’re here … it’s an event piece, rather than a lengthy sort of story.”

Sunshine, who has been working as a photojournalist for four years believes it’s about the quality of talent.

“It’s not how long you take it’s who you find,” she says.

“If I could be here all weekend I would. I’d probably wait as long as everyone for no other reason than to capture them.”

The store, which was meant to operate over three days, sold out on Saturday, meaning on Sunday it did not trade.

In the aftermath of the event, Charlotte Knightley, a neighbouring shop owner, wrote a Facebook post to West, expressing how she had lost $6000 in business as a result of the hundreds in the queue outside her shop.

Knightley says her entire experience with West’s temporary pop up store and consequent Facebook post has been an emotional roller coaster.

“At first shock that I didn’t know it was happening and couldn’t plan. Secondly, frustration because I couldn’t get any assistance from police, council and security, then after the post started to pick up, shock again. Lastly, emotional because of all the hate I’ve received online,” she tells upstart.

“Maybe I was naive in thinking that Kanye’s fans and followers would all just have a laugh at the post with me,” she says.

“I kinda didn’t really think about it at the time. I just posted it not thinking it would be a big deal.”

is a third year Bachelor of Journalism student at La Trobe University and a staff writer for upstart. Twitter: @jdeguzman_17.