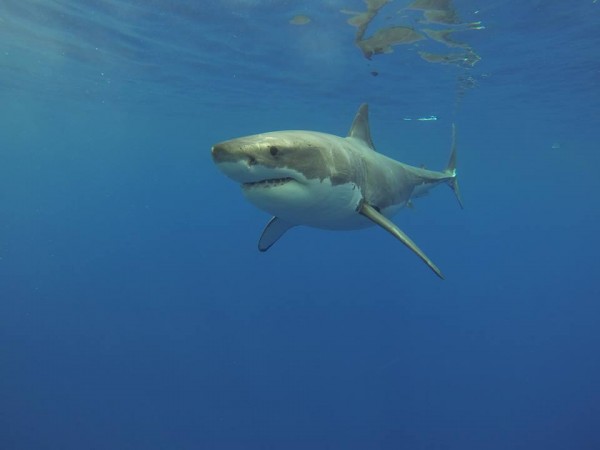 There have been 11 recorded shark incidents in New South Wales this year, as reported by the Australian Shark Attack File.

The latest incident involved surfer Craig Ison, who was attacked by a great white at Evans Head last month. He is now recovering from surgery on his arm and leg.

Earlier that month, bodyboarder Matt Lee endured extensive injuries to both legs after being bitten by another shark.

Additionally, Tadeshi Nakahara from Japan, was killed off Shelley Beach near Ballina earlier this year.

“This means their presence in the water is completely natural,” he says.

Home of Shark Alley, a hunting ground for sharks, Gansbaai residents are aware of the risks when they enter the water.

“I know people personally who surf in areas where they can see eight shark diving boats from where they surf,” Billen says.

Statistics of shark encounters are only recorded on days where a sighting or attack has occurred, not on days where humans and sharks don’t interact.

“The fact that so few incidents occur is a testament to their hunting ability and selectivity,” he says.

The NSW state government is still not convinced that a cull is the right answer to these recent attacks.

“There is definitely a slowing down of [people] getting in the water. Most are just waiting until the end of whale season when most of the sharks go again,” he says.

Posted by Support Our Sharks on Friday, 14 August 2015

Despite this, there is still growing fear among locals. However, McMahon says the shark dive scene hasn’t been hindered.

“A limited cull is usually set a specific distance from shore, or [is designed to kill] one species or certain individuals,” he says.

There is no scientific evidence to prove that these killings work. Hawaii culled sharks for 18 years, but the number of shark incidents did not actually decrease.

In spite of this, the government decided that nothing says “Happy Australia Day” like a shark cull.

Under the $22 million “catch-and-kill” policy, all sharks three metres or longer found hooked but still alive were to be shot and disposed at sea.

McMahon tells upstart that baited and hooked lines are not selective enough.

Eight other species were caught and killed in the WA cull, including Mako sharks, stingrays and an alleged dolphin. The Fisheries Minister, Ken Batson, denied catching the dolphin, insisting it was a 2.3 metre tiger shark.

95 per cent of the animals caught were tiger sharks – a species that had no recorded history of human encounters in the area since 1929.

Designed specifically to catch and kill great whites, the drum lines did not catch a single one.

WA Fisheries Minister told The ABC that it was because “the great white season is later”.

“Their behaviour and complex migratory patterns are not well known, but it is perfectly normal for fluctuations in their sightings to occur from year to year,” Billen adds.

NSW Premier, Mike Baird, has been discouraged by the controversial idea of a cull, ruling one out earlier this year.

Instead of following WA’s violent methods, the NSW state government has pledged $250,000 to implement technological approaches to deter sharks without harming them.

Aerial patrols are now in place, and those who witness a shark close to shore are urged to call triple zero.

The Department of Primary Industries will decide on a longer-term solution in the coming months, with suggestions of bubble curtains and electronic fields.

However, some Ballina locals think the only way to keep surfers safe is by culling.

What premise Munro is basing that claim upon is unknown.

A white pointer’s penchant for its own flesh is exemplified early on in utero where the pup’s introduction to hunting comes in a Darwinian struggle which sees it devour its own siblings.

100 per cent of great whites that live beyond adolescence grow into big sharks. This has no relation to the number of sharks, merely the biology of their bodies.

An adult great white can reach lengths between four-and-a-half to six metres.

However, the likelihood of having an encounter with a shark is very rare. But due to a growing popularity of water-based activities, the risk of meeting one is heightened.

Aussie surfer Mick Fanning made global headlines in July when he punched a great white in a surfing competition in South Africa.

“Anyone who would actually call that an attack has never seen a great white prey on a seal,” Billen says.

“Surfers are most likely to interact with white sharks a lot more that they would like to acknowledge. What happened to [Fanning] was just one of the rare occasions where we had the privilege of witnessing the interaction.”

“One time I was [surfing] by myself and I thought I saw a fin, and I wasn’t going to risk it so I came back in,” she tells upstart.

Cowgill says she would wait about a month to surf at a beach where an attack had taken place. She is “completely against” a cull and advises people to never surf alone.

Billen suggests that in order to protect the public, the government should invest in research to better understand sharks’ behaviour and migratory patterns.

“No good can come from killing one of the most beautiful, misunderstood and essential animals in the marine ecosystem.”

This is the first instalment of a multi-part series.