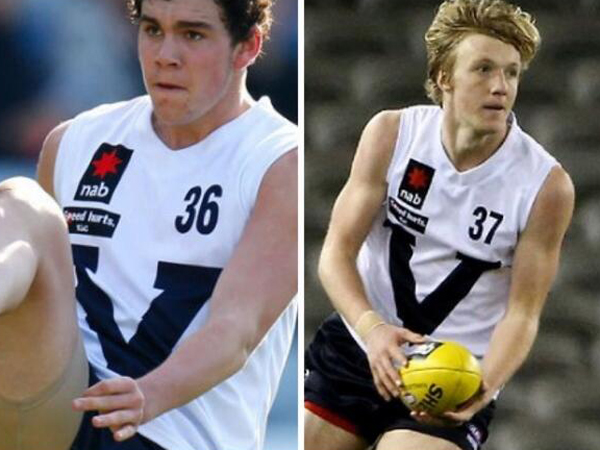 It may be six months until the NAB AFL Draft, but early days suggest there is already a trend emerging.

Indeed, this year’s draft could be the first ever to produce a top three that consists entirely of key-position players.

It might be even be a tall-only top five.

Vic Country’s 15-point win over Vic Metro on Sunday, the first game in the new-look NAB AFL Under 18 Championships, was further confirmation that this is the year to load up on big men.

Among the standout players was athletic tall Hugh Goddard, cousin of Essendon star Brendon, as well as beanpole forward Peter Wright and utility Tom Lamb, the latter of which is the grandson of St Kilda premiership player Ian Cooper.

The Age journalist and The Draft author, Emma Quayle, is renowned for her knowledge about the rising stars of our game.

She tells upstart the likes of Wright, Goddard, Lamb, tall forward Patrick McCartin and injured defender Jake Lever “should all be around the top somewhere.”

“The teams that finish in the bottom four or five this year should have access to a highly talented tall, which hasn’t been the case for quite some time,” Quayle says.

@VicCountryU18s Have some real quality for the draft this year. Patrick McCartin and Hugh Goddard. #FutureStars pic.twitter.com/n0Up26Jkma

While there is plenty of the AFL season to go, the injury-ravaged Brisbane Lions could be on track towards their first No.1 draft pick since 1998, when they picked up Des Headland.

With a deficit of talls on their list to replace ageing warrior Jonathan Brown, the Lions would benefit greatly from this year’s crop of young stars.

Other teams currently outside the top eight, including Carlton, St Kilda and the Western Bulldogs, similarly lack key-position depth and would be served well by an early pick.

However, unlike recent years, there appears to be considerable debate as to who should actually be drafted first.

The likes of Tom Boyd, Lachie Whitfield and Jon Patton were all consensus No.1 picks early in their respective draft years.

But according to Quayle, there may not be a standout this year.

“Wright has started the season in great form after some pre-season hamstring problems and is probably leading the way at the moment,” she says.

“But it’s nowhere near as clear-cut as it has been the last few years and there is definitely a chance someone else will jump up as the Championships unfold.”

And while there is a great story behind every AFL draftee, some are just that little bit more remarkable.

This year’s tall crop alone will likely produce a number of stories that will be talked about come draft time.

It requires him to use injections five to six times a day and regularly check his blood sugar levels – even during games.

The 18-year old told the Herald Sun last year that the condition has to be managed.

“The way I come off and check all the time is something I’ve got used to.”

Although not likely to be an early draft pick, Vic Metro and Western Jets ruckman Duom Dawan’s story is perhaps the most fascinating of the lot.

The Sudanese teenager fled with his family to Egypt, growing up in a refugee camp before relocating to Melbourne as a 15 year-old.

Quayle says the ruckman is a “work in progress.”

“He has only started playing footy in the last couple of years, so his progress this year will be interesting to watch,” Quayle says.

Read @AFL_CalTwomey‘s take on the players to watch at the Under-18 Championships: http://t.co/J4cLgLte58

The next game in this year’s Championships, which run all the way to July 3, takes place this Saturday between South Australia and Western Australia at AAMI Stadium.

While the West Australian duo Jarrod Pickett and Clem Smith are likely to dazzle onlookers, it is 197cm backman Sam Durdin who could make the biggest impression.

The South Australian is considered by many to be the standout defender in this year’s draft. Again, he is likely to feature very early in selections later in the year.

Of course, history shows that things can change quickly in the recruiting world. Injuries, form and even interviews continually shape the early stages of the draft, right up until the final day.

But one thing that remains the same is that the talls never get any shorter.

And AFL clubs searching for premium key-position talent need look no further than the exceptional group of rising stars coming through this year.