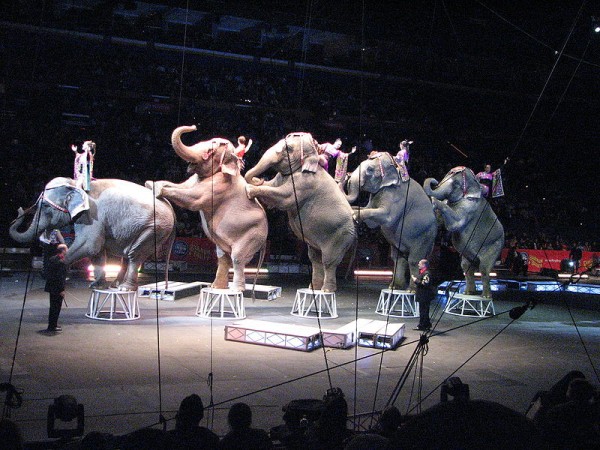 South Australia is renowned for its natural beauty and unique wildlife encounters.

The state has in excess of 120 state and national conservation parks, and the Great Australian Bight is home to one of the world’s largest great white shark populations, fur seals, Southern Wright Whales and rare Australian birds.

Efforts have been made to protect the state’s native species and, more recently, that effort was extended to exotic ones as well.

A plea to ban the use of exotic animals in Adelaide circuses was put to the Adelaide City Council last week. The plea was rejected, however, with five councillors in favour of the proposal and six against.

Can you all please read and sign this online petition? Ignorance is not bliss. Animals in the circus is cruel. Where is our compassion? Change comes from the actions of individuals. Every signature makes a difference. Link in my bio! Petition via @scinnn thank you for doing this ❤️

But why should there be a divide between native species and exotic species when it comes to respecting or exploiting them?

The animals one usually associates with a circus are quite often endangered – they do not belong under the big tops. Often they are kept in an unnatural climate and are forced to participate in abnormal interactions with various other species, including humans. As a result, they are regularly mistreated.

Adelaide Councillor Robert Simms is encouraging South Australians to push towards a ban. He told The Advertiser that “no circus is a place for exotic animals”.

The South Australian branch of the RSPCA is also encouraging members of the community to support the ban, as they are “strongly opposed” to the use of exotic animals in circuses.

The RSPCA’s website references a study conducted by the University of Bristol in 2009. The study found that “unless the species or individual required a small living area, had a simple social structure, low intelligence and could tolerate frequent transportation, then they would suffer”.

Numerous studies have found that elephants, amongst other animals, have exceptional memories. They have been shown to remember physical abuse, including the individual who abused them, and have indicated signs of mental scarring.

In a cruel twist of irony, the film Water for Elephants, which was designed to portray the darker side of circuses after the crowds had gone, came under fire as leaked video footage showed animal handlers abusing elephants and forcing them to perform for the film.

When a bull elephant is in a period of intense testosterone levels known as musth, mahouts or trainers can be injured or killed. It is at that point when the wild animal is labelled a rogue killer.

Naturally, these incidents are not limited to small venues.

Sea World is, in essence, an aquatic circus. Wild animals are taken from their natural environment and trained to entertain humans. Orcas, in particular, are one of the most misunderstood marine mammals in captivity at Sea World.

Arguably the most infamous killer whale in captivity, Tilikum, killed three of his trainers after repetitive demands to entertain enormous crowds at Sea World. When he didn’t perform how the trainers wanted, they would refrain from feeding him and other orcas in his tank. Tilikum was removed from his natural environment and confined to life in a pool. The stress of captivity caused his dorsal fin to collapse – a phenomenon likely to affect orcas in pseudo-marine dwellings, but very rarely in the wild.

Stress and aggravation can prove to be a fatal combination when dealing with unpredictable, wild animals.

In similar circumstances, a Bengal tiger killed its American trainer in a Mexican circus performance in 2013. Reports suggest the tiger was beaten by two other members of the circus staff to try and make the animal release its trainer, with witness statements claiming the animal was put down after the show.

In almost all instances, these animals are not rogue beasts. They are driven to attack and even kill after years of abuse by humans.

Australia is not exempt from the list of circus injuries and fatalities, either.

Peter Singer, an author, philosopher and professor of bioethics at Princeton University, said to Animals Australia: “When children see animals in a circus, they learn that animals exist for our amusement. Quite apart from the cruelty involved in training and confining these animals, the whole idea that we should enjoy the humiliating spectacle of an elephant or lion made to perform circus tricks shows a lack of respect for the animals as individuals.”

These animals are incredibly intelligent and need to be admired and respected rather than mocked and forced to perform magic tricks in front of an audience.

Despite having to adhere to rules and regulations in order to house exotic animals, circuses are not regulated in the same ways that zoos are. The trainers may understand the behaviours of a breed of animal, or even an individual animal, but they may not understand their specific needs in regards to physical and mental wellbeing.

Zoos, fauna parks, animal rehabilitation programs and wildlife orphanages are usually much more effective in educating the public about the preservation of endangered species.

Cirque du Soleil and Circus Oz are among the most renowned circuses in the world. Having removed animal performances from their acts some time ago, their success does not rely on the exploitation of animals in their shows.

It’s the circle of life, not the circus of life.