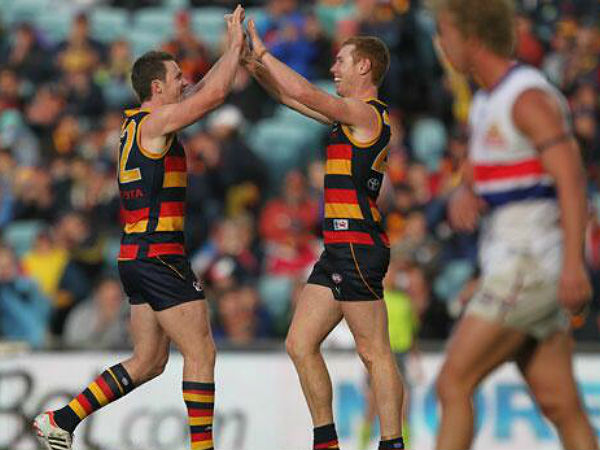 Coach Brenton Sanderson labelled his side “insipid”, “embarrassing” and “unacceptable” after Saturday’s 77-point loss to reigning premier Sydney. It was a seriously disappointing loss from a side that is hard to get a read on. A win/loss ratio of five and six looks far from disastrous, but the Crows are yet to take a big scalp – wins against Brisbane, Western Bulldogs, Greater Western Sydney, St Kilda and North Melbourne haven’t set the world on fire.

The Crows were brave against formidable opponents in the Hawks – in round six – and the Dockers, in round ten. So what went wrong on Saturday against the Swans?

Well, firstly, Sydney was very, very good. On Footy Classified Matthew Lloyd called it “the best performance of the season,” and labelled Sydney “the team to beat,” ahead of the highly fancied duo of Geelong and Hawthorn.

Indeed, it was an ominous performance from the Swans on Saturday. Their pressure around the contest was fierce, and the offensive side of their game continues to improve – largely, it must be said, off the back of what we’ve come to know as “slingshot footy.”

It’s one of those terms often bandied around, probably by plenty of people who don’t really know what it means. Here’s an explanation.

Once the Swans lose possession – in their half of the ground – the midfielders and forwards roll up to half back. Sydney is willing to concede its opponent will get the ball to half-forward, but believes the best chance of getting the ball back will come from forcing a turnover in, or just outside, their defensive fifty.

It’s a similar mindset to what you see in basketball, where most teams set up their defence around the three-point line rather than further up the court.

It’s also a bit like Terry Wallace’s system of flooding from his time at the Western Bulldogs – except in Sydney’s case Lewis Jetta’s there to run the ball out of defence, meaning it looks a whole lot prettier. Clogging the backline means the opposition finds it hard to score, but also leaves Sydney with almost an entirely open forward line to run/kick into when it wins the ball back.

So what does all this have to do with Adelaide?

Unfortunately, Sydney’s greatest asset  – the ability to shut teams down defensively and then rebound – coincides with Adelaide’s biggest flaw, its forward line. That was where the game was won and lost on Saturday.

It wasn’t long ago the Crows had a formidable forward line, but the last few years haven’t been kind to them. Taylor Walker’s knee injury earlier this year set the Crows’ 2013 season in a poor direction, and obviously there was the Kurt Tippett debacle that took place at the end of last year. Many forget Jack Gunston’s departure for Hawthorn the year before.

Losing three key forwards in the space of two years is bad enough, but it was even worse than that for the Crows.

We’ve heard it a hundred times before: key forwards take time to develop. Therefore, if a team needs a stopgap tall forward, moving an experienced defender forward is a good way to fill the void temporarily – take Harry Taylor from Geelong or Ben Reid in Travis Cloke’s absence against Brisbane, as examples.

Unfortunately for Adelaide, a change of ends for a key defender hasn’t been an option either – the Crows lost key-defenders Nathan Bock and Phil Davis to expansion clubs in the last few years, and have subsequently had to plug holes in the back half too.

They kicked just three goals between them on the weekend, and lacked a presence that would have allowed the Crows midfielders to kick forward with confidence, knowing the ball wouldn’t come straight back out. Each of the forwards mentioned have improved so far this season, but will all benefit from further development.

It might sound like a fairly dire set of circumstances for the Adelaide Football Club, but there are certainly positives to be taken from Saturday’s match – namely that it was really only one area of the ground that let the Crows down.

Adelaide had more contested and uncontested possessions than Sydney on the weekend, broke even in centre clearances, and had just one less stoppage clearance. It’s hardly a set of numbers you’d expect to see from a team that’s been on the end of a 77-point thrashing.

Adelaide’s defenders weren’t destroyed either, with many of Sydney’s goals coming from midfielders rather than forwards, as is often the case with the Swans.

Of Sydney’s 19 goals for the match, 13 came from Adelaide turnovers; caused by pressure around the ball, and an absence of a “get-out” target to kick to down the ground.

Saturday’s performance highlighted a flaw in Adelaide’s current make-up. But no team defends as well as Sydney, and few teams rebound as well as the Swans do. The Crows’ offensive concerns are unlikely to be solved any time soon. It’s also unlikely though, that we’ll see another team exploit them as impressively as Sydney did on the weekend.