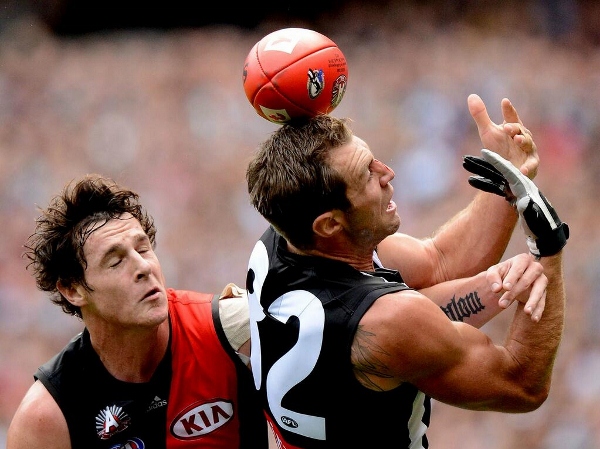 Collingwood is in unfamiliar territory.

The Magpies have finished in the top four every year since 2009, but currently sit in eighth position, with three wins and two losses. More concerning than those losses is the manner in which they’ve occurred. Against both Essendon and Hawthorn, the Magpies seemingly laid down in the last quarter.

After last Thursday’s match, acting captain Scott Pendlebury said the midfield “started cheating” by running forward of the ball in the last quarter.

Pendlebury’s teammates wouldn’t have been happy to hear it – Heath Shaw suggested the matter could have stayed “in house” in a post match radio interview – but the comments held plenty of weight. Coach Nathan Buckley admitted as much after the game.

At the 20-minute mark of the last quarter the Bombers led by 28 points. There was no run left in the Magpies’ legs. From that point, the Bombers kicked another four goals to the Magpies’ one, and the margin blew out.

It was a similar story in round three, when the Magpies found themselves with nothing left to give 16 minutes into the last quarter against the Hawks. The Pies were trailing by 30 points at that stage – then Hawthorn put their foot down, and emerged victorious by 55 points.

“The alarming thing is how quickly we can get blown out of the water once the game seems to be over”, said acting captain Scott Pendlebury in the wake of last Thursday’s loss.

“It is not just this year, it was last year in the finals (against) Sydney and Hawthorn.”

Coaches, players and supporters hate seeing a team give up. Ultimately, there’s no excuse for a lapse in effort. Having said that, when teams plan for games, they only plan how to win.

While blowout losses are an ugly look, should Collingwood really focus on ways to prevent bad losses from getting worse in the future? Surely efforts could be better spent hatching a plan to stop the Magpies from falling into a losing position in the first place.

When Collingwood lost to Sydney in last year’s preliminary final, nobody discussed the Pies’ waning effort when the result was beyond doubt. It didn’t matter how Collingwood played out the inconsequential last five or ten minutes. All that mattered was that Collingwood was out of the premiership race.

Trying until the final siren is obviously honourable, but as former Western Bulldogs coach Terry Wallace said in Year of the Dogs, “They don’t give us something just ****ing for gettin’ close!”

Teams that lose get criticised, regardless of how close they come to winning – look at how North Melbourne has been talked about recently, having lost a number of close games.

Putting fade outs to one side, others have pointed to Collingwood’s playing group as the biggest concern – specifically, those that are injured.

Most recently, defender Alan Toovey ruptured his ACL in last week’s ANZAC Day clash. The injury is both significant and unfortunate – Toovey will miss the remainder of the season – but it comes amidst some more positive injury news for Collingwood.

There are several key Magpies currently absent due to injury, but a number of them are expected to return in recent weeks. Pleasingly, Collingwood is also more sufficiently prepared to cover injuries than it has been in the past.

For one, the recruitment of veteran ruckman Ben Hudson already appears a success. Hudson was essentially recruited as a back-up plan, to play senior footy in the event of an injury to number one ruckman Darren Jolly. In Jolly’s absence, Hudson has been more than serviceable.

Credit too should go to Quinten Lynch, who has shouldered plenty of the ruck load since Jolly went down. Lynch effectively replaced Chris Dawes at the end of last season. While Dawes is yet to make his debut for the Demons, Lynch’s form this year has been vastly superior to Dawes’ form last year. So far, the Pies get a tick there, too.

Jordan Russell – another mature aged recruit, from Carlton – has had a less impressive start. Even the most unabashed fan of Russell would admit that he’s started this year slowly, and turned in an absolute shocker on ANZAC Day.

But even Russell’s inclusion into Collingwood’s backline has had positive elements. With Russell playing a purely defensive role on opposition small forwards, Harry O’Brien has been afforded a greater opportunity to play up the ground, closer to a wing. While Travis Cloke’s seven-goal haul stole the headlines after Collingwood dismantled Richmond a fortnight ago, Harry O’Brien played one of his best games for the club. After a disappointing 2012, O’Brien’s output has lifted so far this season.

While Collingwood waits for senior players such as Nick Maxwell, Luke Ball, Darren Jolly, Dayne Beams and new recruit Clinton Young to return from injury, younger players are being blooded.

Of those, Jamie Elliot looks certain to keep his spot, having provided the Magpies with another avenue to goal up forward. His five-goal haul against the Blues in round two went a long way to getting Collingwood across the line. Mature-age recruit Sam Dwyer is another promising player who seems likely to hold his spot in the side.

If you look across Collingwood’s list, few players have dropped away. Many, in fact, are playing better football than they were last year. Even Travis Cloke, who led the competition in contested marks last season, looks a more threatening player than he was this time a year ago.

It would be foolish to read too much into Collingwood’s current ladder position (eighth) and percentage (93.8). After round five last year, the Magpies had won three matches, and had a percentage of 92. By the end of round 22, the Pies were once again in the top four.

The Magpies’ next month includes games against Geelong, Sydney, and Fremantle (at Patersons Stadium). These are big games, but if any club is accustomed to performing well in blockbusters, it’s Collingwood, who rarely plays in front of less than 50,000 spectators. If the Magpies win two, or even three of them, they might well be premiership favourites – for the second time so far this season.