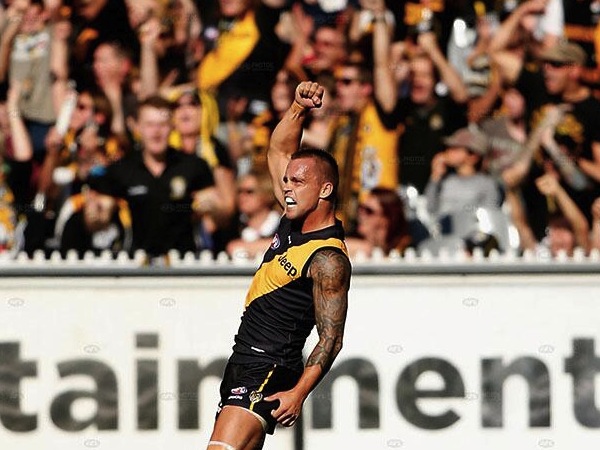 2013 began in such promising fashion for Richmond.

The Tigers broke a nine-match losing streak against the Blues in round one, before taking care of the Saints and the Bulldogs in their next two games. Wins against the latter two clubs might not sound all that impressive, but those games were significant. In recent years Richmond has had a tendency to lose games against inferior sides – last year’s loss to Gold Coast being the most memorable example. Paul Roos described the final moments of that match as “the worst 47 seconds” of football he had ever seen.

Richmond appeared to finally be on the right path just three weeks ago, but has since lost matches to Collingwood, Fremantle and Geelong. The Tigers sit outside the top eight once again, and fans and critics alike are starting to raise questions. 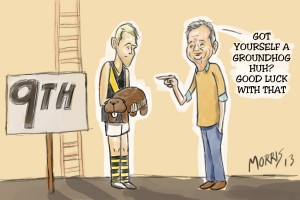 In particular, Richmond has been criticised for its poor tackling numbers. The Tigers are currently ranked last in the competition for tackles. There is no doubt coach Damien Hardwick will be hoping his players can lift their intensity for the remainder of the season, but there is a valid reason why Richmond mightn’t be overly concerned.

A quick glance at the club’s tackling figures reveals what looks like damning evidence, but it seems few have looked at the other side of the coin.

While the Tigers have laid few tackles in comparison to every other club, they have won the tackle count in half their games. In the last fortnight Richmond out-tackled both Fremantle and Geelong – two of the top tackling sides last season.

Some sides – like Sydney and Fremantle – are at their best in high-pressure matches, rather than free-flowing shootouts. In these type of matches both sides generally have a high tackle count. The Swans’ and Dockers’ pressure around the ground forces a drop in opposition sides’ disposal efficiency, which gives them their best chance to win games.

In last year’s Grand Final, for example, Sydney laid 110 tackles, substantially higher than Hawthorn’s 88. Compare those numbers with figures from Sydney’s clash with Richmond in round seven last year. The Swans won the tackle count that day too, but neither side landed many – Sydney put on 71 tackles, while Richmond had 66. The Tigers ran out winners by 29 points over the eventual 2012 premiers, because they were able to control the style of play.

Games featuring low tackle counts for both sides are generally free-flowing, high-scoring affairs. Richmond excels in these circumstances. The fact the Tigers have been able to manipulate matches to be played on their terms – for extended patches in most games so far – has been a positive this year.

Opposition coaches do everything possible to ensure the likes of Trent Cotchin, Brett Deledio and Dustin Martin aren’t afforded time and space to open games up with their explosive speed and elite kicking skills.

There have been criticisms regarding Cotchin’s disposal efficiency in recent weeks too, but this can be put down to more than 40 percent of his total possessions being contested. There were several uncharacteristic errors in his performance last week, but Cotchin remains an incredibly damaging player when given a chance to use the ball effectively.

It’s slightly absurd to question Cotchin’s standing in the game just six weeks into the season, considering he finished equal runner-up in last year’s Brownlow count, at the tender age of 22.

Considering his age, Cotchin will most likely improve in coming years, both as a player and a captain. More broadly, the same can be said about Richmond.

There is sense this Richmond outfit should be ready to contend for a premiership now, but this is born purely out of the frustrations of long-suffering Tiger fans. We know Richmond supporters have been waiting more than thirty years to see their club win a flag, but it is completely irrational to link thirty years of frustration to the club’s current playing list.

In reality, Richmond’s side is still quite young. In fact, it’s difficult to identify a player who won’t benefit from a few more years of experience. Of the team that took the field last weekend, just five players were over the age of 27.

In two years, three of those players – Ivan Maric, Daniel Jackson and Troy Chaplin – will still be under 30.

The other two – former-skipper Chris Newman and livewire small forward Jake King – will be on the wrong side of 30. But their absence – if they have departed the club by that point – will be offset by the development of younger players.

Dustin Martin is by all reports growing in maturity off the field as well as on it. Who knows how far he’ll have come in two years time? Even spearhead Jack Riewoldt, who has recently been described as petulant, may be a more mature footballer in a couple of years. It’s easy to forget that Riewoldt is yet to celebrate his 25th birthday.

Maturity is a key ingredient for success. With it comes the ability to win close matches – another area in which the Tigers have struggled in recent times.

As the saying goes, time heals all wounds. Richmond fans must temper expectations for the time being, and remain patient for a few more years.

Consistently beating the sides they should beat is a step forward for the Tigers. In a couple of years, they will be better placed to match it with the competition’s best – the likes of Geelong and Collingwood, who proved to be a step above Richmond in recent weeks.

Until then, fans and players should simply expect steady improvement.

The Tigers are improving – their ladder position simply doesn’t show it yet.