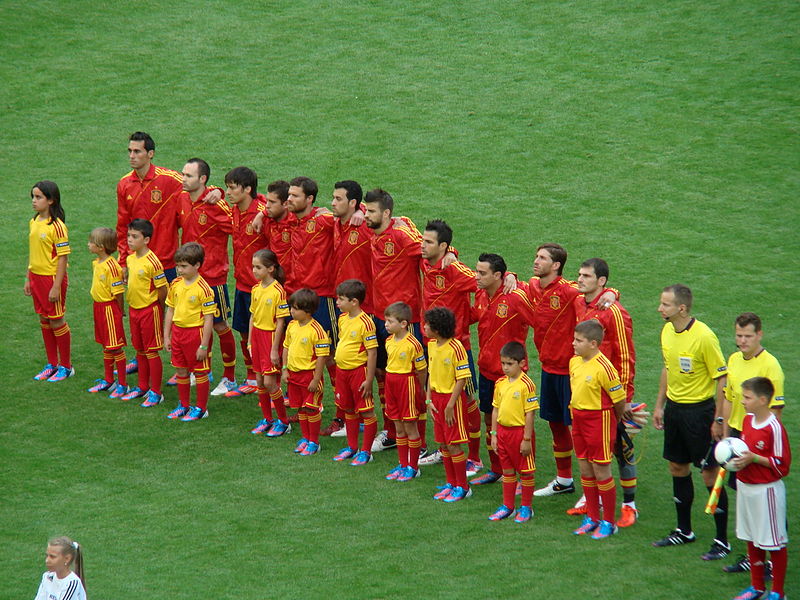 Spain has started EURO 2012 strongly, winning Group C. Can it defeat France and advance to the Quarter Finals? (image: Arvedui89 via wikimedia)

Vicente del Bosque’s squad is littered with stars in almost every position, yet Spain is yet to truly hit their straps despite topping Group C.

The Italians presented them with a stern test, one in which they were in some ways lucky to come away with a 1-1 draw after coming from behind.

Del Bosque’s striker-less formation was heavily criticised following the Azzurri match, and Fernando Torres was injected into starting line-up to face the Republic of Ireland, who they comfortably outclassed 4-0 with Torres’s brace signalling a return to form.

Against the Croats, the Spanish controlled much of the play but much like the Italy encounter, were unable translate this into more than one goal. Unlike the Azzurri a fortnight prior, Croatia failed to score and as a result Spain advanced to the knock-out phase in ominous yet somewhat underwhelming form.

Comparatively, France seemed to have turned the corner from their 2010 World Cup debacle in the opening two group games of Group D. First, they controlled much of the contest against England but were only able to come away with a 1-1 draw thanks to a Samir Nasri equaliser.

Goal-scorers Jeremy Menez and Yohan Cabaye then fired them towards a 2-0 drubbing of co-hosts Ukraine despite a torrential storm interrupting proceedings in the first five minutes. This victory was France’s first in major competitions in six years and with the already eliminated Sweden to come, progressing as winner of Group D looked to be a lay down misère.

However, the revitalised Swedes thoroughly outplayed Laurent Blanc’s charges 2-0 on Tuesday. What is most concerning for the French is not as much the loss itself, but rather the reported disharmony within the dressing room.

Blanc admitted that after their loss to the Swedes that the dressing room “got a bit heated,” and the French do have recent history of disunity within the squad that now threatens to derail what looked to be promising campaign.

In contrast, Spain is a unified exemplification of pure class – a collection of individual stars that mould themselves into the team ethos and structures for the benefit of each other.

MUST-SEE: There is no scientific formula that guarantees footballing success, yet EA Sports have conjured up some widely known facts and intertwined them with some FIFA12 gameplay in order to create an outlook on the French national team. At the very least the men and women at EA Sports are doing a fantastic job to promote their hugely popular brand. Take a look here.

EYEBROW RAISER: After heading Portugal to a 1-0 lead over the Czech Republic in Friday’s Quarter Final, Cristiano Ronaldo – ever the gentleman – sent a wee message to rival Lionel Messi. Ten points for the first who can lip-read.

BALOTELLI WATCH: When Mario Balotelli received a four game ban for stamping on Scott Parker’s head in January, who would have thought that the next meeting between the pair would be in a Euro Quarter-Final.

On that day in January, James Milner, Jolean Lescott and Joe Hart were on Balotelli’s side in sky blue. Now the tables have turned, should a similar occurrence take place, how would these three proud Englishmen react?

Take a look at Balotelli’s ugly stomp on the Spurs playmaker earlier this year here.

REASONS TO WATCH SPAIN VS FRANCE: France is the last team to defeat the Spanish in a major tournament, a 3-1 victory at the 2006 World Cup. We all know how littered with brilliance Spain are, but what is underestimated is just how potentially mercurial the French are too.

Karim Benzema is one of the finest strikers in Europe and has the pace to get in behind any back four in the world. Samir Nasri is coming off a superb title winning season for Manchester City and Franck Ribery, although ordinary versus Sweden, has scored four goals in his last six international games and is a constant threat.

REASONS NOT TO CHEER FOR FRANCE: Watching the French squabble and argue is pure entertainment. Their loss last week against a Zlatan Ibrahimovic-inspired Sweden showed a few cracks and should the Spanish run over them in a similar fashion expect some sort of controversy.

The French aren’t good losers. They never have been. When confronted with unfavourable match situations look no further than arguably their two greatest ever players; Eric Cantona and Zidadine Zidane. Both were enormously gifted hotheads capable of throwing more toys than your average toddler.

TONIGHT: The winner will meet Portugal, the loser will go home tonight in what shapes as a mouth-watering clash between two of Europe’s footballing powerhouses.

Amazingly, Spain has never beaten France in a competitive match with Iker Casillas, Xavi, Xabi Alonso, Cesc Fabregas, Andres Iniesta and Sergio Ramos the survivors from the two teams’ 2006 World Cup last-16 clash in Hannover. Since that day, Spain has lost just two of 38 competitive matches and in amongst those wins is their Euro 2008 and World Cup 2010 successes.

Tonight, del Bosque has his full squad fit and available for selection and is likely to persist with the in-form Fernando Torres at the expense of Fabregas. If the Spanish have one area of weakness it is in defence, and the pace and trickery of Ribery, Nasri and Benzema on the counter-attack will be crucial in testing Gerard Pique and co.

Philippe Mexes picked up his second yellow card of the tournament against Sweden and as a result will miss tonights game. He is likely to be replaced at centre-back by Arsenal defender Laurent Koscielny who is yet to take the field this tournament.

Expect Spain to again dominate possession as they have done in every game so far, but unlike their Group C opponents, the Spanish are faced with a more difficult forward combination tonight.

Real Madrid’s Benzema hasn’t been at his best in the past three matches, but his intricate knowledge of many of Spain’s La Liga based players could be an advantage for the speedy striker.

Never discount the French to rise to the occasion, but Spain remains a class above and if they take their chances, should be too swift for the quarrelling Les Bleus. (Prediction: Spain 3 France 1)